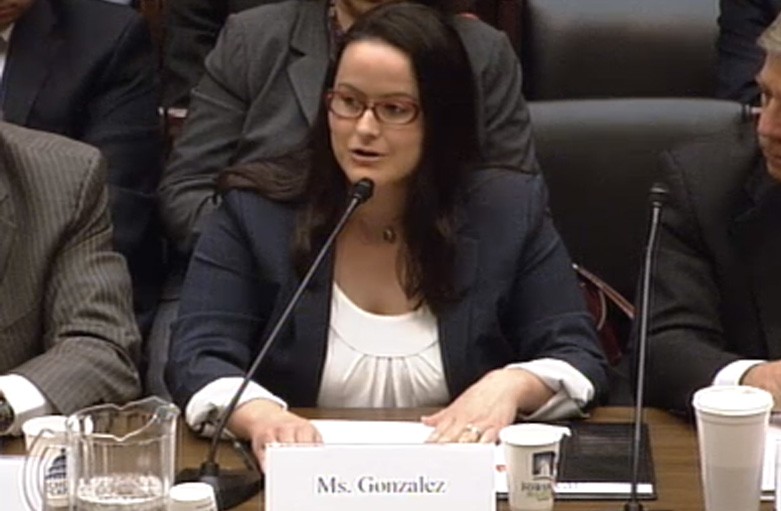 Save the Lifeline Program

Today Jessica Gonzalez, the National Hispanic Media Coalition’s vice president of policy and legal affairs, testified before the House Committee on Energy and Commerce’s Subcommittee on Communications and Technology. She discussed the importance of the Federal Communications Commission’s Lifeline program, which uses resources from the Universal Service Fund to ensure that every American can afford basic phone service. The Subcommittee is questioning whether the Lifeline program is “money well spent.”

Chairman Walden, Ranking Member Eshoo and members of the Subcommittee, thank you for inviting me to testify. I am Jessica Gonzalez of the National Hispanic Media Coalition, a nonprofit organization that scrutinizes telecommunications policies through the lens of how they affect Latinos and other people of color.

The question posed by today’s hearing is whether the Lifeline program is “money well spent.” I answer with a resounding “yes.” This program has an important goal: to ensure that all Americans have access to affordable communications. Lifeline has a positive societal impact and makes us a stronger and more prosperous country. The benefits of Lifeline directly affect our economy, employment, health care, public safety, strong families, civic participation and education.

The idea that we, as a country, should remove barriers so that all people can access communications is not a new one. In fact, the concept of universal service can be traced back to the Postal Act of 1792 which, when signed into law by President George Washington, established the Post Office, expanded postal roads and established low postal rates for newspapers.

At the beginning of the 20th century, the principle was applied to fledgling telecommunications services. And throughout history, it has enjoyed support from Republicans and Democrats alike. In fact, Lifeline’s roots lie in the Reagan administration’s FCC, which created Lifeline at the behest of a bipartisan group of congressmen and senators.

In 1996, Congress further codified the concept by establishing the Universal Service Fund. The Telecommunications Act included language stating that “[c]onsumers in all regions of the Nation, including low-income consumers and those in rural, insular and high-cost areas, should have access to telecommunications and information services.”

Lifeline now provides phone service to more than 15 million people. Who are these people? According to one provider, most have a household income of less than $15,000 per year. Nearly a third are over the age of 55 and over one third are disabled.

Stories in the media of corporate abuse for profit off of the backs of hardworking people have drowned out the voices of the very real individuals and families that use Lifeline as a tool to improve their lives and move away from government assistance.

I sit here before you today to share their stories.

The story of a disabled mother from Tennessee caring for a child with Down syndrome, who said “It gives me peace of mind to know that I can always call for help.”

The story of a veteran and double amputee, who uses Lifeline to coordinate his doctors’ appointments and check in with family when away from home.

Of a man with only a few months to live, who said that without his Lifeline he would be unable to stay in touch with his 88-year-old mother.

And a single father who was laid off but secured a new job in just a few months using his Lifeline.

And a pediatrician in Boston, who treats patients living in shelter, public housing and on the streets. She can monitor those children because of Lifeline cell service.

The story of a mental health therapist in Baltimore schools, who explained that Lifeline could have helped when one of her third-grade clients attempted suicide at school. His mother had no phone and was difficult to reach that day.

I think you get the picture. The vast majority of Lifeline recipients are grateful seniors, deserving veterans and many folks who are going through the hardest times of their lives — facing job losses, illnesses, disability and family tragedies. For these people, Lifeline literally lives up to its name and must continue.

Speaking from personal experience for a moment, I learned about Lifeline about 10 years ago after I had been laid off. I subscribed for a brief period of time. But the media isn’t telling my story, because it isn’t sensational.

I used Lifeline to enhance my educational endeavors and today I am a successful attorney. And I, like everyone else I know that has ever relied on a government service at a certain point in their lives, was not flaunting it around town. In fact, if anything, I was embarrassed about it. With a sense of pride, my goal was to use the assistance until I got back on my feet, and to never speak of it again. But today I realize that the voices of folks like me are going unheard, to the detriment of this very important service that is bettering peoples’ lives.

To conclude, I once again offer a resounding “yes” to the question posed today of whether Lifeline is money well spent. Thank you for allowing me to testify this morning. I look forward to your questions.

Jessica Gonzalez is the vice president for policy and legal affairs for the National Hispanic Media Coalition.