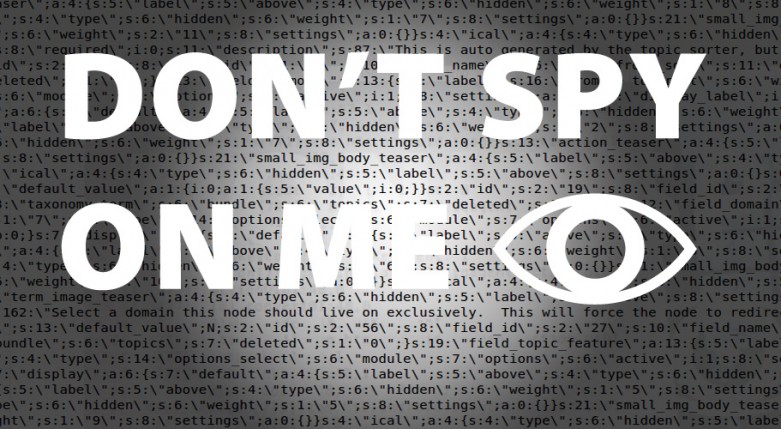 The government is spying on you. In fact, the National Security Agency may be reading this very blog post.

So the Free Press Action Fund has teamed up with Mozilla, the Electronic Frontier Foundation, Access, Demand Progress, Fight for the Future and other groups to launch StopWatching.Us — a call for Congress to investigate the NSA’s privacy-killing surveillance schemes.

Imagine if the government just ripped out everyone’s window curtains — that’s the effect of the NSA’s spying.

Living in a surveillance state makes it harder for the press to hold power accountable, for activists to organize for justice — and for everyone to live their lives in private.

Last week’s leaks described two programs. One is a tracking program in which AT&T, Verizon and other phone companies send the government details about millions of people’s phone calls every day.

The other program, PRISM, is also terrifying. The NSA allegedly uses it to collect user data — including the contents of communications — from Internet companies like AOL, Apple, Facebook, Google, Microsoft, Yahoo and others.

This means the government could have access — in real time — to every one of your personal emails, all of your chat logs, every video you watch on YouTube, every term you search on Google, every picture you post on Facebook, and every news article you read on Yahoo. It all goes straight to the nation’s top spying agency.

On Saturday, Edward Snowden, the NSA whistleblower behind these leaks, stepped forward. In a long interview with the Guardian, he said he believes the NSA “targets the communications of everyone.” If this is true, it could mean the government has access to everything you say or do online, no matter how private or personal.

The ramifications of this for our democracy at home and democratic movements around the world are staggering. People everywhere will be less willing to stand up to those in power if they know American spy agencies are watching.

Edward Snowden was outraged by what he saw. If you are too, call on Congress to investigate the NSA’s spying programs.