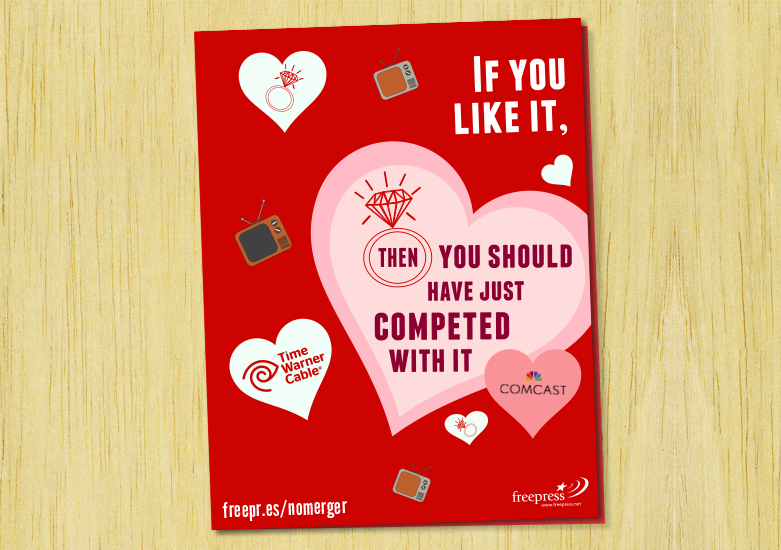 You might know my buddy Comcast. As the country’s largest Internet and cable company, Comcast is super popular (or maybe just a super monopoly, but hey ... six of one/half a dozen of the other).

Sometimes when you’re that famous, people are afraid of telling you the truth. This has been going on with Comcast for years. Sure, people speak up when they're late to brunch or when they’re supposed to be helping us but aren't. And we shouldn't shy away from speaking up now.

I’m calling on all of us to stop being the kinds of bad friends who don’t speak up when they see a never-ending bad-relationship streak. Let’s refuse to be bystanders. Let’s be the kind of people Comcast really needs.

Let’s tell Comcast to break it off for Valentine’s Day.

Let me just start by saying we’re in your court. We’ve been your friends for years. We’ve lost track of how much money we’ve given you. And yet every time you say that you want to get together with someone else it’s like all the good things about you vanish. And the hard truth is this: Every time you find someone new, it’s always a bad match.

Look, I know this isn’t what you want to hear the same week that you debuted your latest partner to the world. But you really need to slow down. I mean, it was only a couple years ago that you claimed your latest fling, NBC, was the real deal. You told us all that this was it. You wanted to hook up with NBC so badly, in fact, that you didn’t care when we all told you that it wasn’t the right match, that you don’t know the first thing about vertical integration, that you’d never run a television network or a movie studio before. You were obsessed.

So imagine how surprised we all were when you said you now want to get together with Time Warner Cable. I’m not even gonna get into the merits of whatever sort of weird free-love-open-relationship model you must have worked out with NBC, but since we’re the ones who have to sit through your awkward dinner parties I feel like you should at least consider where we’re coming from.

Comcast, we aren’t trying to gang up on you. We’re coming from a place of love and support. And we really feel like you need to start putting YOU first.

Take some time to invest your profits in your infrastructure instead of running around with these new companies all the time. Pause and engage in some serious self-reflection to figure out what you want (I’ve always thought that you could benefit from seeing a therapist or two). Ask yourself what your goals are — do you want to be a cable company? A phone company? Do you really need to own a movie studio?

Try to focus on what you’re best at. And once you get started, you’ll be surprised at how easy it is! Before you know it you’ll stop being voted “Least-Liked Company in America” and be well on your way to weaving yourself into the hearts of people who will respect you for you.

So this Valentine’s Day, why don’t you end it with all these other companies and start looking out for number one. We know that Feb. 14 is supposed to be all about making up and not breaking up, but Whitney told us long ago that the greatest love of all is the love we give ourselves.

You’re better than this and we know it.