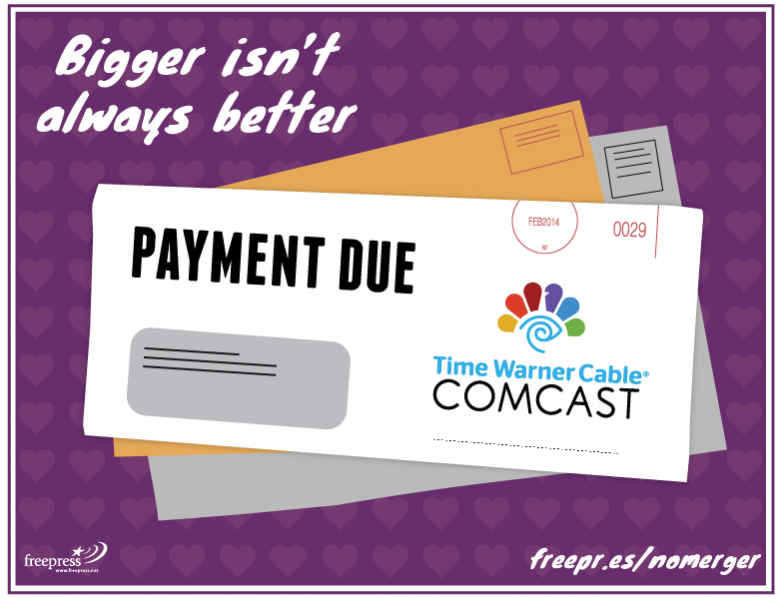 Face It, Comcast Doesn't Love You

You know when it seems like you've met the one. They look goooood, and say all the right things. They even offer to pay for stuff. Then one day, you catch them sneaking around with the legislator or lobbyist next door (let's just call their "friend" ALEC, for conversational purposes), and you finally understand the difference between real investment and pretense. It's hard to admit you got played. It hurts. But Valentine's Day is a good time to face facts.

Though the proposal unveiled by Comcast earlier this week to buy Time Warner Corporation for $45 billion might look sexy at first glance — a closer look reveals the proposed merger's ugly side. As with the 2011 Comcast/NBC merger, the marriage of Comcast and Time Warner is not the love fest it appears to be. In fact, there's evidence that families currently forced by anti-competitive practices to rely on Comcast may face real threats if the deal is sealed.

Like with any relationship, it's important to get past the honeymoon phase, with all the flowers and candy, to find out what you're really dealing with before you tie the knot. So, as a Valentine's Day gift to you, I've got six common sense ways to help you evaluate the Comcast/Time Warner merger. And you should evaluate this merger — because when big corporations marry each other, the public marries them, for better or, usually, for worse.

1. Check out their last marriage. Was it any good?

Remember when Comcast merged with NBC in 2011? As a condition of the merger, Comcast-NBC agreed to increase local and Spanish-language news programs for five years and produce an additional 1,000 hours annually of original news programs for a number of its stations. But they didn't. Instead they fudged their reports to get out of the commitments they made to improve programming in local and Spanish-speaking communities. Comcast also broke a promise to get 2 million qualifying low-income families connected online, through a failed Internet essentials program. With all these broken promises, why should consumers, or others, trust Comcast to keep it's word? Oh, this time will be different, baby.

2. Check out where they live.

My mother always said that how folks act at their own house is a good indicator of how they will act in yours. In Philadelphia, home of the Comcast Center, the telecom giant enjoys hula hooping with tax loopholes as a pastime. Specifically, Comcast benefits from a 10-year tax abatement plan that shortchanges Philadelphia's students while giving Comcast a significant tax break. While Comcast is enjoying it's home team tax advantage at the expense of school budgets, the company also spends its free time interfering in the city's budgeting process. The scary thing is, Comcast doesn't limit its bullying to Philadelphia. This merger would give Comcast unprecedented leverage in local franchising deals, giving the company near-monopoly access to local infrastructure in cities across the U.S. and raising near-impenetrable barriers to media engagement that some communities just can't afford.

3. See how they treat people who work for them.

You can always tell whether someone will make a good partner by checking out how they treat people who work for them. Comcast has been no friend to workers. In the last year alone, Comcast opposed paid sick leave for workers in Philadelphia, jacked up employee health care costs in Massachusetts, withheld back pay in New Jersey, and kept wages low and unions out across the country. So, when Comcast asserts that the merger will bring more and better jobs, just ask the people who already work for Comcast how the whole "more and better" thing is working out.

4. Get to know their friends.

Bet you didn't know that Comcast is a member of the American Legislative Exchange Council (ALEC), and is a leader in ALEC's task forces on communications and technology, and tax and fiscal policy. ALEC is best known for its lobbying for Stand Your Ground laws, but is a smooth operator when it comes to helping big telecom companies change state laws for corporate gain.

In this case, not really. "Hunky" Time Warner just had to pay $1.9 million in fines for failing to notify consumers they were secretly charging them based on the credit reports. And "dreamboat" Comcast has had more than 23,000 customer complaints filed against them. In fact, the American Consumer Satisfaction Index ranked both companies' services the lowest in the country.

6.Figure out what the financial burden of this union will really be.

In order for this deal to be approved, Comcast is "prepared to divest" systems serving up to 3 million current customers. Where those customers are, and what actual impact will be isn't yet known, but it seems crystal ball clear that a of LOT of consumers will potentially be left out in the cold. Further, right now Comcast limits how much data customers can stream from the Internet, while Time Warner has unlimited streaming plans. If I were a gambler, I'd bet that if the merger is approved, those unlimited plans will be gone with the wind.

If this Valentine's Day checklist isn't enough to convince you to be skeptical of any proposal by Comcast to grow from big to bigger, just remember that they are a media company, they got good game. They know how to flirt. But, anybody who has ever dated knows that a great relationship takes a lot more than "good game".

A great relationship requires honesty, loyalty, and respect — values Comcast has demonstrated outright disdain for. If the purveyors of the public interest don't step in with some good counsel and protection now, more workers may lose benefits, more cities may see detrimental impacts to their budgets and schools systems, and more families may be locked into long term disconnection by high prices.

Luckily, before Comcast and Time Warner are pronounced a cable monopoly in control of roughly three quarters of the nation's cable market, the Federal Communications Commission and the Department of Justice get to weigh in, and I want to make sure you can too.

Here are three action ideas from members of the Media Action Grassroots Network to help the powers that be make the right choice:

Take action, like, ASAP. Tell Washington how you feel about the merger, and demand a rigorous public process that gives the little guy a chance to be heard.

Urge your city government to evaluate their current relationship with Comcast, including any upcoming franchising deals that are on the table.

Support local communities as they raise a powerful voice for fair franchise agreements with Comcast, just like they are doing in Philadelphia.

Relationships are rarely easy, but this Valentine's Day, you're not alone with the jumbled mess of economists, technologists, policy wonks, and teary commercials that come with the announcement of a big telecom merger like this one. This time you've got me (heeeey), and two simple pieces of advice. Learn to let true love in when it comes, but say the Nay-No to bad relationships before they start. And the Comcast/Time Warner merger is as bad as they come.