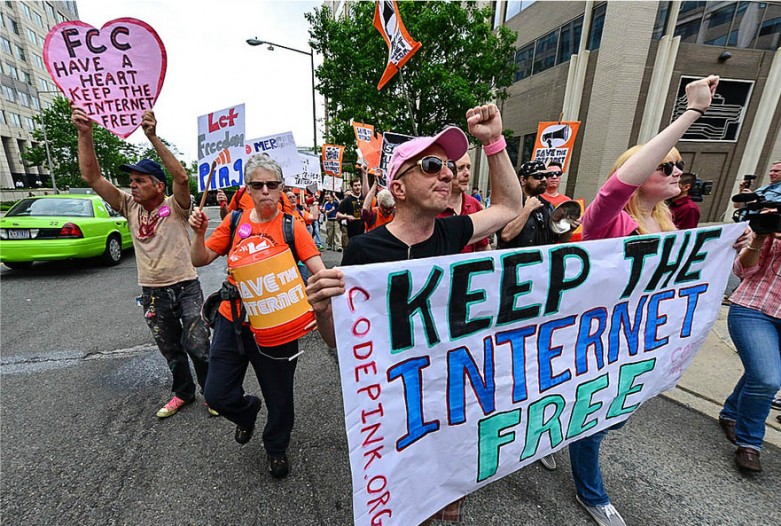 Candace Clement
May 16, 2014
Net Neutrality
The FCC and Media Policy

On Thursday, the FCC released its proposal on how it intends to protect Net Neutrality in the wake of a January court case that tossed out the agency’s rules.

And, just as we feared, the rules pay lip service to the idea of the open Internet while proposing solutions that would create a two-tiered Internet with fast lanes for those who can afford it — and dirt roads for the rest of us.

But this doesn’t mark the end of the fight. In fact, Thursday was just the kickoff.

So if you’re like most people I know and you care about this issue but don’t spend every waking moment following the intricate details, fear not. That’s what we’re here for.

Is all hope for Net Neutrality lost?

In fact, the momentum that’s built for real Net Neutrality over the last five months is unprecedented.

Over the coming months, the public will have the opportunity to weigh in on FCC Chairman Tom Wheeler’s proposal. But we’ll also need to get the word out elsewhere — in town-hall meetings, with our elected officials, with the president, etc. The only reason Net Neutrality still has a fighting chance is because people are making a ton of noise about it. If we keep that up, we can win.

To truly protect Net Neutrality, the FCC needs to reclassify broadband providers as common carriers under Title II of the Communications Act.

OK, that’s reassuring. So how does this work at the FCC now?

May 15 was the official introduction of this proposal in what’s called a “Notice of Proposed Rulemaking” (aka NPRM). With the NPRM out (and despite the chairman’s claims to the contrary, it’s bad — if not worse — than we expected), the public now has a chance to file comments on the plan before the FCC votes on it in September.

The reply-comment period will give people the chance to parse through what everyone has said so far, and then the opportunity to weigh in once again. And if the agency chooses, it can then issue what is called a “Further Notice of Proposed Rulemaking” to open yet another round of comments.

The FCC has indicated that it wants to move forward with a vote this year, so it looks likely that we’ll see one this fall.

That sounds really bureaucratic and complicated. What can I actually do to make an impact?

It’s definitely bureaucratic, but it’s not as complicated as you might think. Anyone and everyone can offer their perspective and be part of this fight. The next few months will determine whether we win or lose the Internet. So here’s what you can do to help.

Remind President Obama of his promise:

Tell the FCC to get out of Washington and into our communities:

Tell everyone you know to do all of these things too: