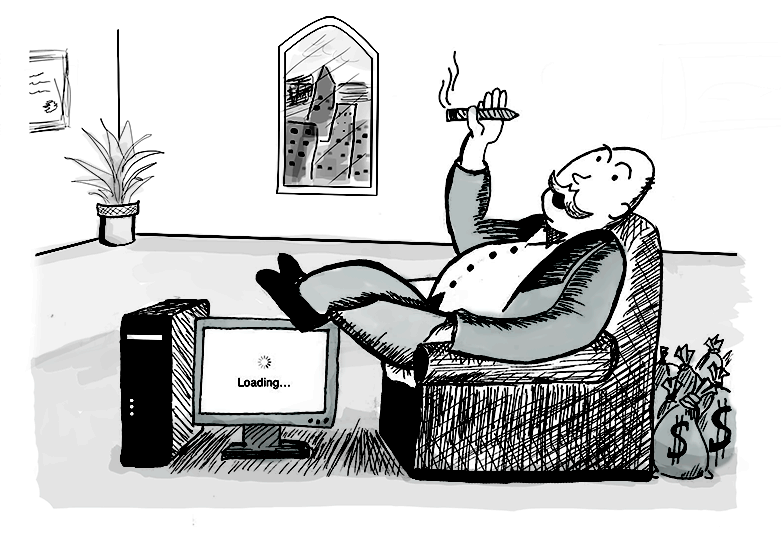 Support for Net Neutrality has spread — in the streets, in Silicon Valley and at kitchen tables and coffee shops around the country.

But the more traction it gets nationwide, the more vicious the attacks on the open Internet have become. Most all of these attacks are generated by lobbyists and public relations flacks on the payroll of powerful phone and cable companies.

While they aren't winning many converts to a corporate-controlled Internet among the general public, they have found a few allies on Capitol Hill.

Enter Rep. Bob Latta, who on Thursday introduced a bill (H.R. 4752) that would prevent the Federal Communications Commission from taking any meaningful action to protect real Net Neutrality.

Latta claims that his bill will "keep the Internet open and accessible." But it will actually do the opposite — preventing the FCC from treating Internet service providers as "common carriers."

Without that authority — provided under Title II of the Communications Act — the FCC lacks any effective means to stop Internet discrimination. Companies like AT&T, Verizon and Time Warner Cable could forge ahead with their plans to create a two-tiered Internet, striking special fast-lane deals with websites and services that they like while relegating the rest of us to slower and congested ones.

Without common-carriage protections, these ISPs can slow and even censor Web content at will. And they’ve already admitted to plans to do just that.

So why is Rep. Latta claiming to be a champion of the open Internet while proposing legislation that helps ISPs shut it down? A big part of the answer can be found at the Center for Responsive Politics, which aggregates data on campaign contributions, including those made by phone and cable companies and their trade groups to members of Congress.

Rep. Latta is an industry favorite, having raked in a whopping $320,000 in campaign contributions from the communications sector since he took office in 2007.

In the 2014 election cycle, Latta has already received contributions from nearly every major ISP and supporting trade group in the country — including a veritable "who's who" of Net Neutrality haters: 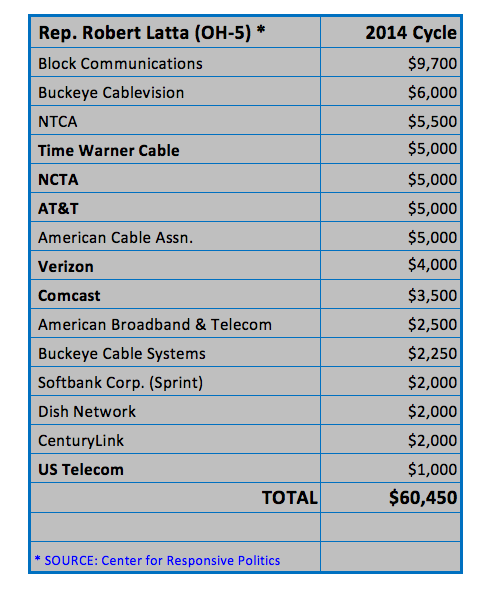 By now it should be clear that Latta's bill is for the biggest companies that punch his campaign dance ticket, and not for the millions of people who have urged the FCC to protect the open Internet by making these same companies common carriers.

But while Latta may be pushing this bill, he’s not alone on Capitol Hill. Nor is this brand of congressional quid pro quo limited to one side of the aisle. Earlier this month, 20 Democrats signed a letter to the FCC warning Chairman Tom Wheeler away from making ISPs common carriers.

According to research from Maplight, these Democrats have received on average much more in campaign contributions from the phone and cable lobbies than the non-signing members of Congress. One in particular, Rep. John Barrow of Georgia, has received nearly $60,000 in campaign contributions from these industries in this most recent election cycle — more than five times the average amount received by his House Democratic counterparts.

People across the country are taking action to make sure that Rep. Latta's toxic bill doesn't get any traction.

Reclassifying ISPs as common carriers is the only way to stop phone and cable companies from taking control of the Internet away from users.

If the FCC fails to take this simple step — or if it's restricted from doing so — the Internet as we know it could be lost. That's exactly what companies like AT&T, Comcast and Verizon want. And they're paying good money to ensure Congress does their bidding.

Tell Congress: A vote for Latta's bill is a vote against the open Internet.