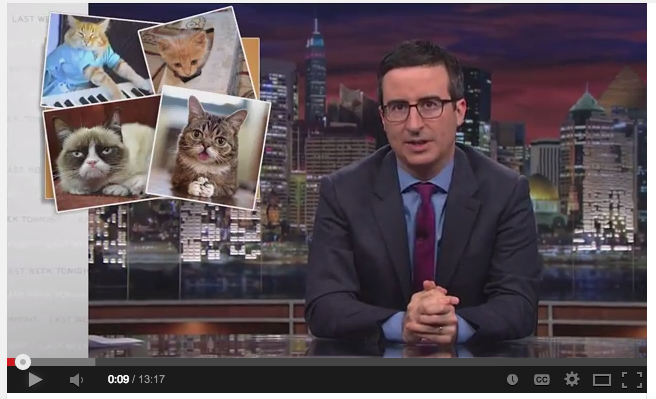 Video: Time to Lock Caps and Save the Internet

As with many complicated issues making news, it often takes a comedian to sort things out in ways most of us can understand.

On Sunday night, John Oliver, host of the popular news-comedy show Last Week Tonight With John Oliver, informed the world about Net Neutrality in ways that were both nutritious and hilarious. Yes, funny broccoli.

Net Neutrality. The only two words that promise more boredom in the English language are ‘featuring Sting,’ Oliver said. "I would rather listen to a pair of Dockers tell me about the weird dream it had."

And he was only getting started. In a blistering segment that stretched more than 13 minutes, Oliver told viewers that Net Neutrality is "hugely important."

He ripped into phone and cable companies, including Comcast, Verizon and AT&T, for pledging to protect the open Internet while taking action to do the opposite.

"You might wonder, if everyone is against [undermining Net Neutrality] how is it even possibly happening?" he asked.  "Well, consider who would benefit from this change. Cable companies. Verizon wants a two-tiered system so badly that they sued the government to force the rule change that's currently being discussed. These companies have Washington in their pockets to a conveniently almost unbelievable degree."

Oliver then laid into FCC Chairman Tom Wheeler — President Obama's choice to head the agency — who served previously as the top lobbyist for the cable industry.

"Yes, the guy who used to run the cable industry's lobbying arm is now running the agency tasked with regulating it," Oliver said. "That is the equivalent of needing a babysitter and hiring a dingo."

Oliver gets down to the chilling realities of America's home-grown Internet:

With the fact that they are practically overseeing their own oversight it is hardly surprising that cable companies are basically monopolies now. A federal study found that 96 percent of the population had access to two or fewer [wired] broadband providers. It's almost as if they have agreed to stay out of each other's way like drug cartels.

… is it any wonder that in a massive recent customer satisfaction survey Comcast and Time Warner Cable came in dead last. And when you look at the companies that were scored better than them. People were basically saying, ‘Yes, Bank of America took my home. Yes, Taco Bell gave me diarrhea. And sure, GM tried to kill me. But Time Warner [Cable] and Comcast are the worst. They are the worst.’

For Oliver the sleep-inducing nature of Internet policy is intentional for all the wrong reasons. "The cable companies have figured out the great truth of America," he said. "If you want to do something evil, put it inside something boring."

But for Oliver, there's too much at stake here to ignore. He closed his segment urging the angst-ridden community of online commenters to rise up as one, point its breathless fury at the FCC, and tell the agency to stand up for a neutral Internet.

"Seize your moments, my lovely trolls, turn on caps lock and fly my pretties, fly."