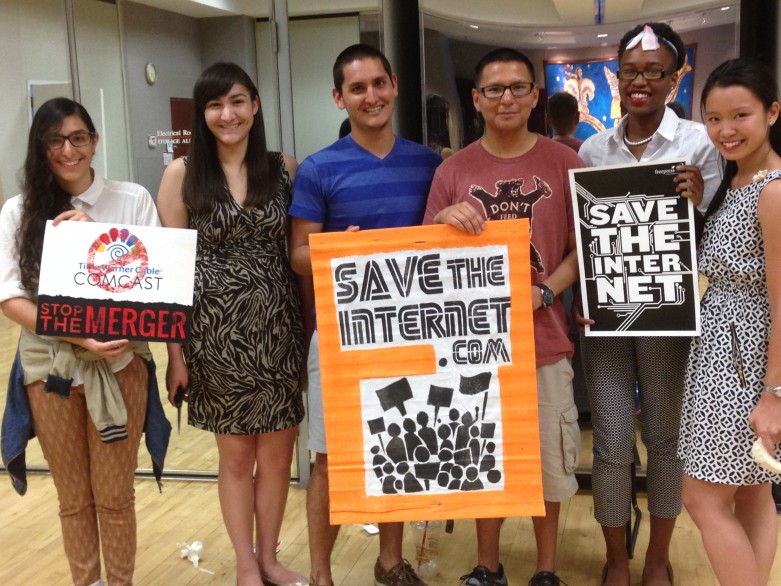 Audience members wanted to hear directly from the chairman about his controversial Internet proposal, which would permit paid prioritization and undermine Net Neutrality. But many were disappointed with his answers.

The energetic event was fantastic, thanks to the Media Literacy Project, which planned and hosted it, as well as friends from the Center for Media Justice, Generation Justice, the New Mexico Digital Justice Coalition and more.

Yet Wheeler dodged several questions from young audience members concerned about the state of the Internet in New Mexico.

College student Lucia Martinez, who was one of many to speak out during the event, said that the Internet is a necessity in her life. She reminded the audience that the United Nations declared communications a human right, and wanted to know what the FCC is doing to reclassify broadband as a telecommunications service.

Rather than answer Martinez and others, Wheeler hid behind concerns about “stifling innovation.” He posed questions back to the audience about the decisions he’s supposed to be making.

This continued through the evening as Wheeler cloaked his answers in technical jargon.

State Sen. Candelaria talked about the wide digital divide in New Mexico — currently ranked 50th in terms of Internet access — and the growing anxiety in his community about Wheeler’s proposed Internet rules. The senator expressed discomfort with Internet fast lanes that are reserved for those who can afford them — and highlighted the impact of geography, race and class on who gets access. He likened Internet access to water in terms of importance, and said communities should not be asked to live without either of these vital resources.

Wheeler said he was concerned about an Internet that is prioritized for those that can afford it. But he didn’t address concerns that his proposal would allow prioritization, or discuss how he’d increase Internet access or close the digital divide.

Throughout the evening, Wheeler claimed that he supported the “open Internet.” He expressed concern about the struggles of people living without Internet access. He said he was against online discrimination — even pay-for-prioritization. He just doesn’t seem willing to recognize that his proposal would allow it.

He claimed to understand and know the issues people face in Indian country after a visit to Acoma Pueblo, but it was completely unclear what he wants to do to better serve native populations. When two young women from Acoma spoke up about the difficulty their friends have doing homework without home Internet access, Wheeler said little about actually bringing broadband to the homes of their community members.

While he took care to highlight his background as a businessman and venture capitalist, he left out the part about his many decades’ experience as a lobbyist for the cable and wireless companies he’s now in office to regulate.

He repeated questions rather than answer them. He even said audience members were making assumptions about his plans. And he said that the FCC will not just sit around “sucking eggs.” But that’s exactly how Chairman Wheeler came across in Albuquerque. And perhaps that line will inspire more late-night comedy.

He promised to take the concerns of New Mexicans with him back to Washington. And I hope he does. Given what I heard in the room, New Mexico is depending on him to absorb their concerns and do the right thing.

However, I’m concerned that Wheeler seemed more intent on trying to show empathy for the audience than understanding how his decisions will impact their lives.

It’s going to take many more events, actions and hearings to convince the chairman that scrapping his rules and reclassifying broadband as a telecommunications service is the only way to protect our communities from online discrimination.

He can start by continuing to travel around the country, truly listening to the communities he visits and hosting more public gatherings featuring open dialogue with attendees. And he can urge his fellow commissioners to join him — since they too will be voting on his proposed Internet rules.

That’s the recipe for getting his decisions to match his rhetoric, and addressing the needs of the people he was appointed to serve.