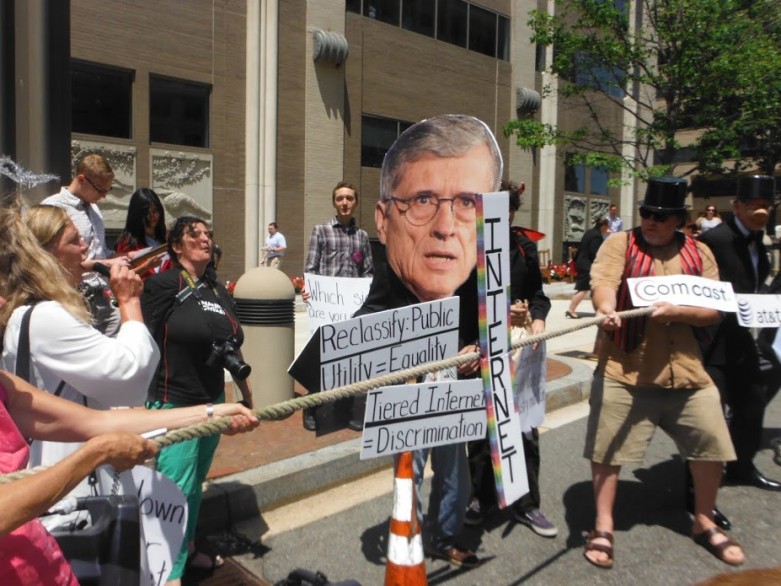 Which Side Are You On, Tom?

Net Neutrality activists had one simple question for the FCC chairman on Tuesday: Which side are you on, Tom?

Popular Resistance members were joined by Code Pink, Free Press, the Women’s Institute for Freedom of the Press and other Net Neutrality activists.

Protesters held signs high: "HONK for Net Neutrality," "One Internet for Everyone," "Reclassify the Internet as a Common Carrier," and "NO to Internet Discrimination." Many FCC staffers looked on as they headed out for lunch.

Activists also sang chants, which included a remix of a popular Queen song:

Tom, are you a slick man, bought man

Just profits for the telecom industry

We will, we will, rock you.

Activists then squared off against telecom fat cats representing AT&T, Comcast and Verizon in a tug-of-war while a giant cut-out of Chairman Wheeler's face looked on.

As the two sides competed for the future of the Internet, activists sang:

Which Side Are You On, Tom,

Which side are you on?

Are you with the people or with the telecoms?

The Internet is our commons

We use it every day

But now the giant telecom

Would make it based on pay

Neutrality must not die;

Oh listen to the people

Their comments you must see

They say the Internet

Is a public utility

Don't forget that your job is

To serve the people's will

So don't give away our Internet

And leave us with the bill.

The tug-of-war ended with the people prevailing as their telecom opponents fell to the street in defeat.

The public is united in support of reclassifying ISPs as common carriers, and in opposition to the chairman's plan to create fast and slow lanes online. Anyone who wants real Net Neutrality needs to tell the FCC to side with the public as well. Send your comments today.