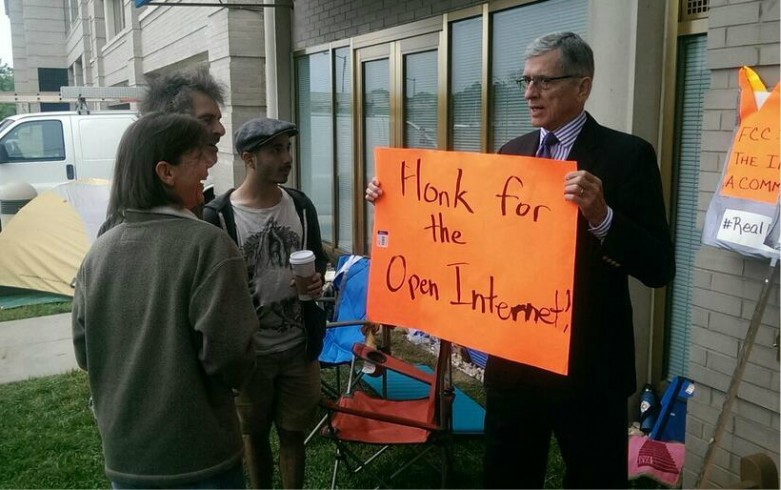 What do you get when you mix a cable lobbyist with a federal regulator?

You get FCC Chairman Tom Wheeler. What you don’t get is Net Neutrality.

On Wednesday, Mike Masnick of Techdirt looked at comments filed in the FCC proceeding by Comcast, Verizon, the National Cable and Telecommunications Association and other industry representatives. His conclusion: “[A]ll of the major broadband players are pretty clear that they really, really like the FCC's plan.”    And they’re not only working the FCC to support it. Their lobbyists have been pounding the marble of Capitol Hill to cheer on Wheeler’s Way.

So what’s the problem?

Wheeler, who previously led the cable industry's top lobbying group, has repeatedly sworn to “strongly support an open, fast and robust Internet.” He has said he’d never allow an Internet with fast lanes for the few companies that can afford them and slow lanes for the rest of us.

But his proposal makes this dark scenario a reality. It's built on a legal argument that is so flimsy that it allows Internet service providers to slow down some sites and speed up others. It lets them destroy the level playing field that’s been a driver of innovation and free speech since the Internet’s inception.

And that’s exactly what the phone and cable companies want: a regulatory regime where they get to rewire the Internet and dictate what sites and services succeed online.

Wheeler’s proposal is that bad and people know it. Over the past week people sent so many comments urging the FCC to protect real Net Neutrality that the agency's website sputtered to a halt on Tuesday.

Every major consumer group, thousands of startups and small businesses and hundreds of thousands of people have already urged the agency to abandon Wheeler’s proposal and use its congressionally approved authority to reclassify ISPs as common carriers — services that must transmit information without discrimination.

Overwhelmed by the response, Wheeler extended the deadline for comments to midnight on Friday.

The astonishing response didn't just break the site; it's broken a record: The FCC has never received this many comments on a proposed rulemaking in its history.

There has never been more awareness and enthusiasm about this issue. And almost no one besides Wheeler and the big ISPs likes his pay-to-play Internet proposal.

Wheeler claims he supports the open Internet, but the rules he’s proposing would allow rampant discrimination and fast lanes for the fortunate few.   That’s a proposal only Big Phone and Cable could love. And they’re doing their very best to make fake Net Neutrality a reality.