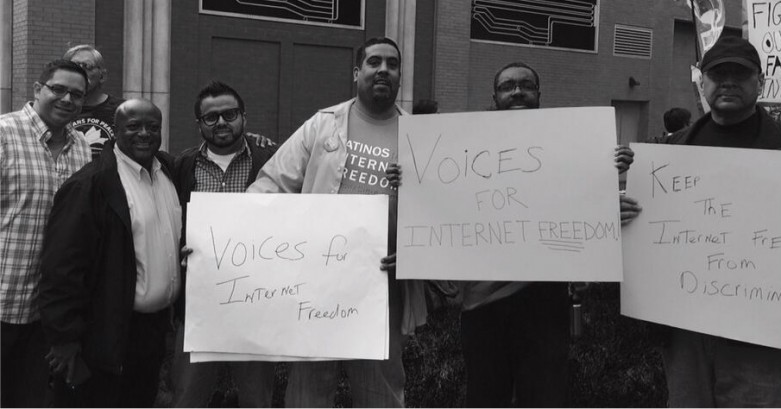 The Fight for Net Neutrality Is a Struggle for Human Rights

Everyone has the right to freedom of opinion and expression; this right includes freedom to hold opinions without interference and to seek, receive and impart information and ideas through any media and regardless of frontiers.

The fight for Net Neutrality isn’t just a battle against companies trying to take over the Internet.

The Universal Declaration of Human Rights stipulates that “all human beings are born free and equal in dignity and rights,” that human rights are to be enjoyed “without distinction of any kind such as race, color or sex.”

And that includes the “right to freedom of opinion and expression.”

The open Internet has given people around the world the freedom to hold opinions and express themselves without interference. It has allowed individuals the right to seek, receive and impart information, which has in turn facilitated social change, as happened with the Arab Spring revolutions of 2011.

But if FCC Chairman Tom Wheeler’s plan to allow discrimination online is adopted, it would curb our right to communicate freely.

These rules would gut Net Neutrality and limit the range of individual perspectives and voices we see and hear online. This would violate Internet users’ basic human rights to self-determination and dignity.

Protecting our free speech rights online is critical to ensuring that communities of color and other marginalized groups have equal access to information and accurate representation in the media. It also ensures we have ownership over creating and distributing our content to a large audience.

The United States has a long and shameful history of oppressing people of color. Throughout that history, the media have endorsed racist and discriminatory government policies — everything from slavery to the current criminal justice system. The media have also tended to portray people of color stereotypically, making it easier for politicians and others to demonize and marginalize non-white communities.

Meanwhile, the FCC has allowed massive media consolidation — which is why people of color own so few broadcast outlets and are underrepresented throughout the media.

If the deal is approved, Comcast will control nearly half of the truly high-speed Internet market and will have way too much power over what we see online.

The death of Net Neutrality could result in the electronic silencing of our online communities. This would endanger our ability to challenge authority and those who control the flow of information and knowledge.

It’s critical that the FCC adopt policies that promote freedom of speech and expression. The FCC has the power to do so. In Verizon vs. FCC, the case that overturned the agency’s 2010 Open Internet Order, a federal court noted that the Commission could adopt strong Net Neutrality protections to prevent online discrimination if it treated ISPs as common carriers.

Anything less than reclassification to common-carrier status will allow the ISPs to fundamentally alter the Internet as we know it, creating a preferred service for those that can afford it, and a congested service for those that can't. We must fight these efforts to eliminate equal access to the Internet for all Americans. Such a turn of events would be particularly damaging to those who have always struggled to have their voices heard.

One way to judge a society is on whether it provides and protects basic freedoms for its people. If Chairman Wheeler refuses to reclassify ISPs as common carriers, then he’s sanctioning ISPs’ right to discriminate online. This means he’s OK with allowing the privileged to speak the loudest — and letting everyone else struggle to be heard.