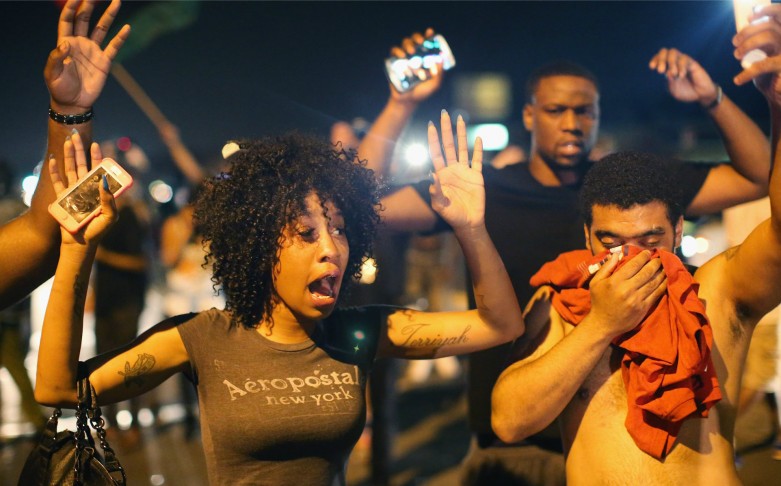 Over the course of history, each new medium to arrive has had the potential to enable everyday people to push back on power, to produce and distribute authentic messages coming from our communities, undisturbed by a corporate filter. And each has repeatedly been killed. For each medium — radio, television and print — there was the promise of people-controlled media. Yet through media consolidation and barriers to entry created by larger corporations to prevent new players from entering, the promise was undone.

—James Rucker, ColorOfChange (excerpted from “Who is Killing Net Neutrality?”)

As hundreds of Black residents in the St. Louis suburb of Ferguson march into another day of protests against the murder of unarmed Black teenager Michael Brown, a threatened but still open Internet thrust the story into widespread, necessary visibility. It’s one of the reasons that keeping the Internet open is not an abstract issue for me as a Black person living in America, but a life-or-death one.

From digital activism that echoes local demands for police accountability to the humbling bravery of Black bloggers who have traveled to Ferguson to speak truth to power, the open Internet is a critical battleground where Black communities can connect across geographic lines, fight media misrepresentation, and oppose the police violence we find in every city — in our own voices.

From Truth to Power: Fighting Anti-Black Brutality in a Digital Age

#Ferguson — and moments like this that lay this nation’s greatest contradictions at our feet — is the reason a new generation of African-American change-makers is demanding that the Federal Communications Commission reclassify the Internet as a common-carrier service. Too often, our lives depend on our ability to tell stories of the abuse of power, without interference from corporate gatekeepers.

As the people of Ferguson join the ranks of cities across the country raising their hands in civil disobedience against the systemic abuse of Black bodies by law enforcement agencies, FCC Chairman Tom Wheeler is considering Net Neutrality rules that would force Black Twitter and Black blogs to enter the conversation on police brutality through a digital “poor door,” their content tracked into a digital slow lane by expedient, piecemeal regulation that lets the largest Internet service providers discriminate through paid prioritization.

I would ask you to imagine the impact of an Internet with the legal right to discriminate; if you're Black, though, I think you already know. Black cable isn’t bringing the story of police brutality in Ferguson to your kitchen table; the Black Internet is.

Black bloggers, photojournalists, digital organizers and citizen journalists are a new generation of civil rights leaders. Reminiscent of the Freedom Summer activists who put their bodies on the line 50 years ago to defend the Black right to vote, these strategic griots and community storytellers are a critical line of defense as increasing police violence, mass incarceration, environmental disaster and economic corruption devastate Black communities.

Building off the incredible leadership of the legacy civil rights community, these 21st-century change-makers are using the open Internet to shine sunlight in the darkened corners where anti-Black violence thrives. We need them to tell our stories, and they need a fully non-discriminatory Internet to do it.

In fact, Black Twitter is quickly becoming a major driver of civil rights activism in the 21st century, bringing a necessary dialogue about the systematic murder of African Americans by police and their proxies to the national political stage via the open Internet.

When a juror in the Trayvon Martin case sought to capitalize on the suffering of Martin’s family by securing a book deal, Black Twitter pushed back and the deal was DOA real quick.

When first-degree murder charges against the killer of Jordan Davis were dismissed earlier this year, communities used the #DangerousBlackKids hashtag to challenge the blanket stereotypes and criminalization of Black children. Again, the Internet gave voice to those without a cable outlet or newspaper to speak for them.

Black Twitter used the funny and yet deadly serious hashtag #APHeadlines to hold the Associated Press accountable when it posted what many considered a racially charged tweet about the conviction of Theodore Wafer for the murder of Black Detroit teenager Renisha McBride.

And most recently Black Twitter gave Tyler Atkins, an 18-year-old Black teenager from Houston, the space to use the hashtag #IfTheyGunnedMeDown to protest against what he saw as misleading photographs used by the media following the murder of Ferguson’s Michael Brown.

Twitter the company isn’t responsible for the Black genius blossoming online. Black Twitter is backed and fueled by the hundreds of independent and emerging Black blogs that turned to the open Internet to bypass patterns of misrepresentation and exclusion of Black people in mainstream cable and print news. Black bloggers are flexing their digital muscles to help the nation and the world see that racism is still alive and well.

I am so proud of these leaders.

Black netroots activist websites like ColorOfChange.org acknowledge our voices and give us more ears, allowing a wider audience to hear what has been said by Black communities for centuries: #BlackLivesMatter.

And I am proud of the allied voices online spreading the story of occupied Black neighborhoods militarized to degrees that shocked even the most experienced war veterans.

Together, Black social media, blogs, websites and our digital allies give Black communities the means to bypass a discriminatory press that seems to hunt even our dead bodies down.

As Ferguson police block journalists from reporting at the scene, even mainstream news has had to rely on the open Internet to report on the heinous attacks by police against Ferguson residents. From preventing news helicopters from taking aerial footage, assaulting and arresting journalists, and reportedly directing tear gas and flash grenades at reporters, the Ferguson police are directly interfering with freedom of the press. This not only violates the constitutional rights of the people of Ferguson, it betrays everyone’s right to connect and communicate when they need to the most.

An Open Internet for #Ferguson

The truth is, the debate over the Internet pales in comparison to the suffering in Ferguson. As a Black person living in a time of escalating white American vigilantism, I am more concerned with living than with communicating. But anti-Black police violence thrives in the absence of a watchdog, making the fight to keep the Internet open a 21st-century civil rights issue that no one should ignore.

I hate it, though. This isn’t the first time Black communities across the United States have mourned and fought back as police or proxy violence ended the lives of people who could have been — or were — members of our families. And it won’t be the last. I hate how often we are forced to be witnesses to the murders of our kin. But I need a platform that lets me see it. We all do.

Media audiences need the clear and cogent analysis of an emerging Black digital voice to remind us that even as we are surely attacked, we are not alone. On the open Internet, our movement for change finds both witnesses and partners across the lines that divide.

Still, some think we shouldn’t do everything possible to protect the Open Internet from the predatory schemes of big ISPs. I disagree. I think we should protect Black independent digital voices by any means necessary.

Fists Up for Black Voices

Instead of siding with ISPs, 100 percent of which are led by white CEOs, perhaps we would do better to consider tech policies that strengthen the Black blogosphere, Black organizations, and Black communities. Reclassifying broadband, and ensuring strong Net Neutrality rules, would do just that.

#Ferguson is why Black people need a truly open Internet, and so is every city is which the extermination of Black life is considered routine. As my brothers and sisters in Ferguson raise hands in the air, saying “don’t shoot,” I’ll keep my Black power fist raised along with them — both in homage to their survival, and in thanks to the Black bloggers and ordinary people whose voices are bringing us the story when mainstream media outlets can’t, or won’t.

The “small content providers” of the Black Internet will lose if the FCC allows pay-for-play deals instead of a level digital playing field. And they aren’t the only ones. We all lose when evidence of brutality, stories of resistance and stakeholder voices are tracked into a digital slow lane.

Invisibility is a price Black communities can’t afford to pay.

At least until the FCC makes a decision to either reclassify broadband and ensure the open Internet remains a viable platform for independent Black voices to communicate — or turns the Web into a highly lucrative playground for ISPs — we have the digital voices of the Black blogosphere and independent Black outlets to guide us through the storm.

Our Black netroots nation deserves our greatest thanks. Black leaders should support them by fighting like hell for the strongest possible protections against broadband discrimination, and not the most expedient halfway measures money can buy.

Malkia Cyril is the executive director of the Center for Media Justice.