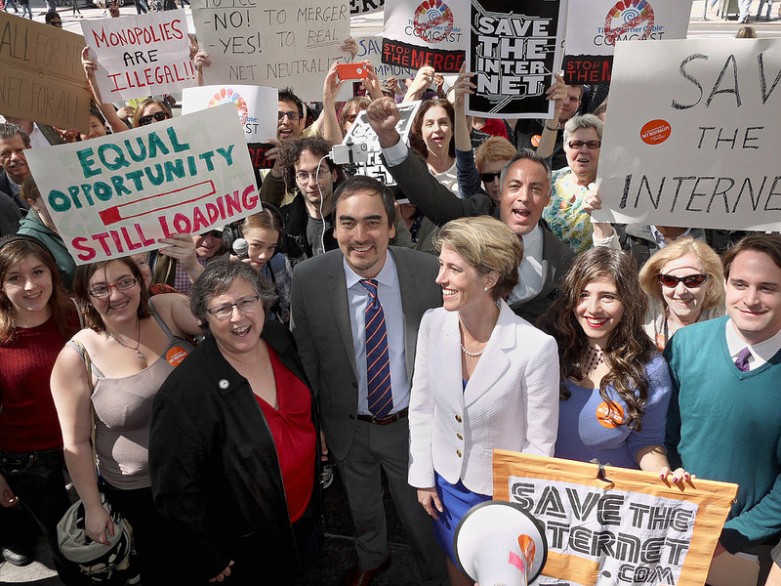 Crowd of 200 in NYC Rallies to Save the Internet

Today 200 members of #TeamInternet came to City Hall Park in Manhattan to speak out for true Net Neutrality — and against Comcast’s plan to take over Time Warner Cable.

During this lunchtime rally organized by Free Press, activists came armed with signs — and a lot of energy. The goal: to show the FCC how crucial it is to protect the open Internet.

Several speakers highlighted what’s at stake if the FCC moves forward with its plan to allow fast lines online: Broadband providers like AT&T, Comcast and Verizon will be allowed to discriminate against online content and services.

Former New York gubernatorial candidate Zephyr Teachout said that politicians have a responsibility to stand up to these companies. “Politicians have an opportunity to take the lead against Big Cable,” she said. “People on the ground know that Net Neutrality and the Comcast-Time Warner Cable merger are political. They’re kitchen-table issues.”

Internet scholar and former Teachout running mate Tim Wu said that killing Net Neutrality is un-American. “What if we had different sidewalks for rich people and for poor people?” he said. “That's not the kind of country I want to be in.”

From the time FCC Chairman Tom Wheeler released his Internet rules in May, people nationwide have spoken out in all kinds of ways against the proposal. Free Press President and CEO Craig Aaron highlighted the grassroots nature of the fight to save the open Internet:

Jennifer Pozner of Women in Media & News underscored how important a free and open Internet is to women and communities of color. The response on Twitter to the shooting of Mike Brown in Ferguson, Mo., demonstrated the power of online activism. “Net Neutrality,” she said, “is a life or death issue for women and our communities.”

Many people in the crowd said that they don’t usually attend rallies but felt compelled to come out to this one. Some said it was their first protest ever. As the record-breaking number of public comments on Wheeler’s proposal shows, people are invested in the fight to save Net Neutrality. And momentum is continuing to build in the campaign to stop the Comcast merger, which would give one bad company too much power over how we connect online.

Here’s how you can keep up the fight for a truly free and open Internet:

Scroll down for video and photos, and check out our Flickr page for more pics.