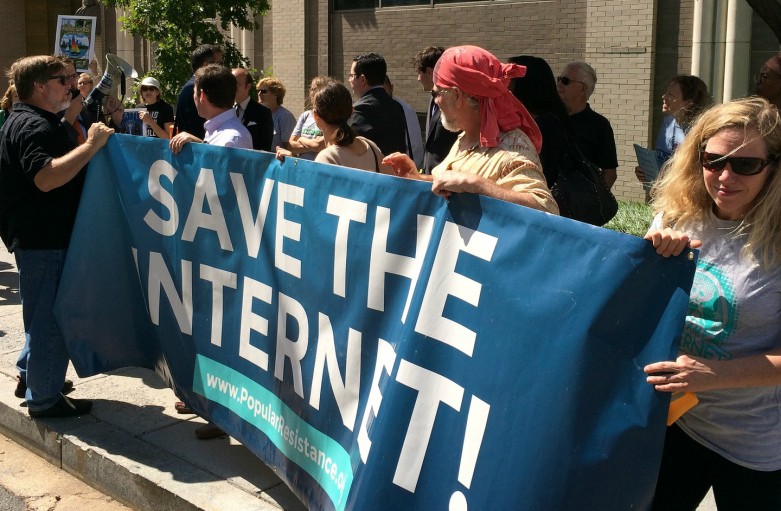 Activists to FCC: We Aren't Going Away

Let’s say you’re Tom Wheeler. If 3.7 million comments from the people aren’t enough to convince you that the only way to protect Net Neutrality is reclassification under Title II, maybe seeing a giant billboard mounted on the back of a truck that’s parked directly across the street from your headquarters will.

I had the pleasure of seeing the now-infamous video billboard in action Tuesday afternoon when I met up with about 60 other members of Team Internet. Members of Free Press, Daily Kos, Fight for the Future and Popular Resistance had gathered to hold signs, watch videos and hand out flyers outside the FCC. Though this is a relatively low-traffic region of D.C., we did get several honks of support, and quite a few drivers pulled over to check out the spectacle. We also got right in the face of the people who will determine the fate of the Internet as we know it.

Ever since the folks at Fight for the Future and NameCheap.com set up shop on Monday morning, FCC staff had been hanging out, watching videos and taking pictures. In between the songs and explainers, Net Neutrality advocates handed out flyers to curious onlookers. And during Monday’s rallies in New York City and Philly, the billboard streamed live video and clips from speakers. Overnight, more than 100 people submitted videos online for a chance to have their messages played on the big screen and broadcast to the FCC.

Around noon on Tuesday, activists from D.C., Maryland and Virginia sporting Team Internet T-shirts gathered in front of the FCC with handmade signs. I also talked to people from Arizona, Connecticut and Minnesota. Whether they were just in town visiting and had stopped by after learning about the action online or had come to town specifically to protest, they were all invested in the fight to protect the open Internet.

As the record-breaking number of comments on FCC Chairman Tom Wheeler’s proposal shows, this is not a debate that concerns only Washington insiders. Millions of people are on the record in support of Title II and real Net Neutrality. The FCC commissioners need to get out of  Washington once and for all and hold public hearings across the U.S.

Check out these photos from Tuesday’s event: