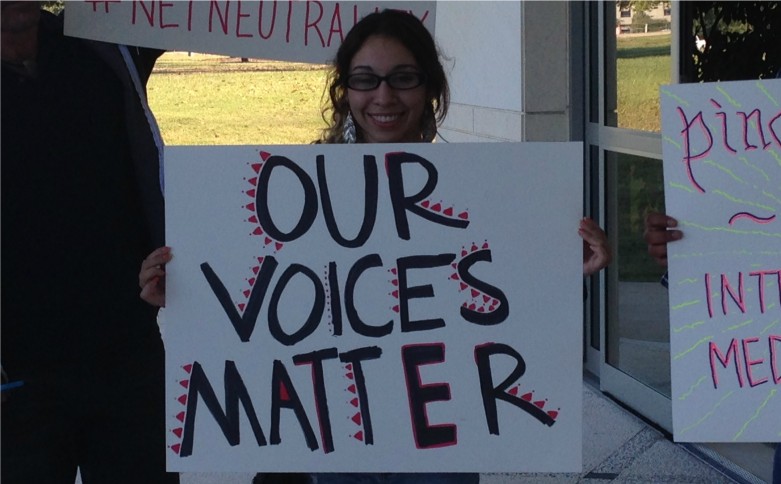 October 21, 2014
Net Neutrality
The FCC and Media Policy
Free Press on the Ground

I gathered bright and early Tuesday morning with a crowd of fellow Net Neutrality supporters at Texas A&M University in College Station. Just three weeks ago, FCC Commissioner Ajit Pai — an opponent of Net Neutrality — had announced plans to hold an open forum at Texas A&M on “Internet regulation.”

In short order Free Press decided to hold a Net Neutrality rally beforehand right outside the event venue. We wanted to be sure our members and allies would have an opportunity to share their stories before heading into the forum.

Many Free Press members had boarded buses at 5 or 6 a.m. to speak out for the open Internet, and they came from as far away as Austin, Dallas, Houston and San Antonio.

People brought signs, wrote comments to the FCC on forms we provided, and talked about the need to protect openness and nondiscrimination online. Allies from the Center for Media Justice, Common Cause and the Martinez Street Women’s Center spoke out about the importance of the Internet in their communities and to the people they work with every day.

Free Press member Jackie of College Station said the Internet helps her access balanced views on subjects she cares about. It saddens her, she said, when she thinks about the prospect of just a few companies deciding what she’s going to see, what she can access, what her daughter can access. At several points during the rally security interrupted us and claimed we were blocking the sidewalk, but we continued speaking out.

At 10 a.m. we joined Commissioner Pai’s forum. The room was only half full; it’s not easy to get people to an event early on a weekday morning on a college campus. However, it was apparent that nearly all attendees were invested in seeing the FCC take action to protect real Net Neutrality.

The audience applauded the comments of Data Foundry CTO Edward Henigin, who challenged the anti-Net Neutrality arguments of people like Commissioner Pai. “How is our Internet service so bad,” Henigin said, “if we have such a great free market?”

“2005 deregulation,” he continued, “meant protectionism for incumbents [like AT&T and Comcast]. Most homes have one, at most two choices for Internet — and if they have a choice, it’s between Tweedledee and Tweedledum!”

Audience members raised concerns about slow U.S. Internet speeds and monopoly control over telecommunications services. One attendee asked what would prevent Internet service providers from charging higher rates for customers who have no other broadband options in their communities. Alamo Broadband President Joe Portman said, “I hope they have consciences” — a comment that drew laughter from all of us who recognize that the big ISPs don’t act out of conscience.

Of the six panelists, only two were supporters of Title II reclassification, which is the only way to secure real Net Neutrality. Their comments drew applause and enthusiastic support from the audience.

Commissioner Pai’s forum was a step in the right direction. But we hope that future forums will be held at times and in locations that make it possible for more people to attend. We also hope that future FCC events will include racially diverse panels with speakers who can address how the loss of the open Internet would impact communities of color.

Most of all, we need events that allow enough time for the public to speak with the commissioners about the issues at hand. During Pai’s forum, the public had just 30 minutes to ask questions following the 90-minute panel discussion. This wasn’t nearly enough time to accommodate everyone who wanted to speak.

Though he opposes meaningful Net Neutrality protections, we have to commend Commissioner Pai for convening a public forum. We will continue to urge FCC Chairman Tom Wheeler and his colleagues to do the same.

In the meantime, we’re working with our allies to organize public hearings in communities around the country. Up next is a speakout in Brooklyn on Mon., Oct. 27. Sign up here!

And check out our Texas rally photos below: