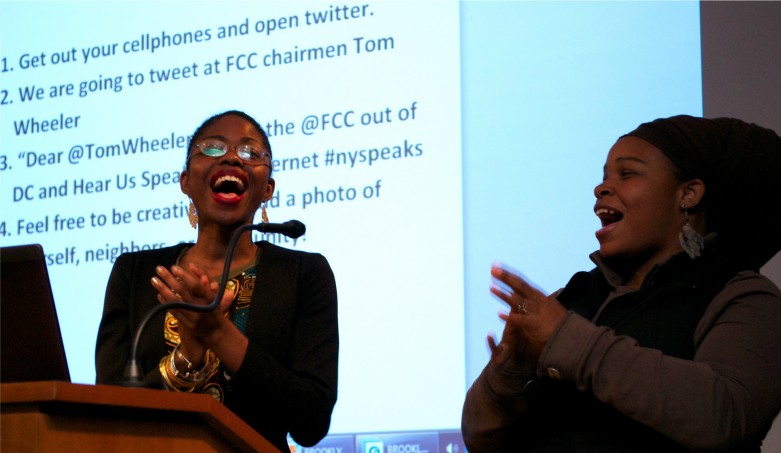 If you were walking past the Brooklyn Central Library on Monday night, you might have seen a worst-case scenario from the future of the Internet brought to life.

People holding signs representing different bits of information ran through fast lanes …. or crawled through slow ones. News about Jay-Z and Beyoncé zipped through. News about Mike Brown and Ferguson stalled … and stalled …

With this interactive street-theater performance, we opened “New York Speaks: A Hearing on Our Rights to Connect and Communicate.” We organized this public event with our allies to enable people to speak out for real Net Neutrality — and against the Comcast-Time Warner Cable merger.

Inside the library, a Kutiman YouTube video mix streamed, a tribute to the freewheeling cultural remixing the Internet enables. More than 125 New Yorkers filled the room, waiting their turn to speak out in defense of the platform that’s so crucial to all of our lives. Participants lined up to testify in front of five empty chairs set out for the FCC commissioners who had ignored our invitation to attend the event.

Rep. Jerrold Nadler, Manhattan Borough President Gale Brewer, New York City Mayoral Counsel Maya Wiley, Rep. Hakeem Jeffries and former FCC Commissioner Michael Copps were among the many people who spoke out. Attendees from all walks of life talked about how important an open Internet is to their businesses, their politics and their communities.

Everyone gathered slammed FCC Chairman Tom Wheeler’s proposal to allow discrimination online ­­— and condemned the prospect of a bigger Comcast.

“The Internet … is actually a life-or-death infrastructure issue, especially for women,” said Women In Media and News Executive Director Jennifer Pozner. She talked about how, for years, she wrote the same article over and over about the misogyny inherent in mass shootings, pointing out a common thread the corporate media had ignored. Then last summer Elliot Rodger gunned down six people and injured 13 — and his hate for women surfaced in online videos he’d made.

“Lose Net Neutrality and these big phone and cable companies are going to be given a license to discriminate,” said Free Press President and CEO Craig Aaron. “FCC commissioners spend far too much time inside corporate boardrooms and not enough time in rooms like this one. It’s been more than five years since all five FCC commissioners appeared outside Washington together at a hearing with an open microphone. We invited them all tonight … we’re still waiting.”

The anger and passion in the room were palpable, and it rose throughout the public testimony.

“I represent immigrants,” Ravi Ragbir said. “Immigrants use the Internet to speak to our loved ones across the world. Who benefits from a fast lane or slow lane? ... These vultures, these greedy executives, what do they want to do? In the quest for the mighty dollar, they want to … pillage our community, sucking the lifeblood off what we are, who we are.”

“Telecom corporations and their partners argue that some discrimination for profit is OK, necessary even,” said Malkia Cyril of the Media Action Grassroots Network. “Discrimination is never OK — not in our police departments or on our Internet. The future of our nation can’t afford more discrimination, online or off.”

“The diversity I see in this room around me is the reason I fell in love with the Internet in the first place,” said one of the final speakers. “I refuse to grow old and look back and say, where was I during this fight? My children will ask ‘where were you … when we sacrificed innovation for greed?’”

These are just some of the highlights from the evening; watch the video for more. And read our press release for more great quotes from the event.

All that was missing from the hearing were the five commissioners. Chairman Wheeler in particular has shown no interest in meeting with the public — though the former lobbyist has had plenty of time to attend industry trade shows. He needs to respond to the millions of Americans who have urged the FCC to prevent a few phone and cable companies from controlling the Internet.

We will keep pushing the commissioners to meet with the public — and we will keep fighting until the FCC safeguards the Internet we love, and blocks companies like Comcast from growing even more powerful.

Check out our amazing event photos below — and go to our Flickr page for more.