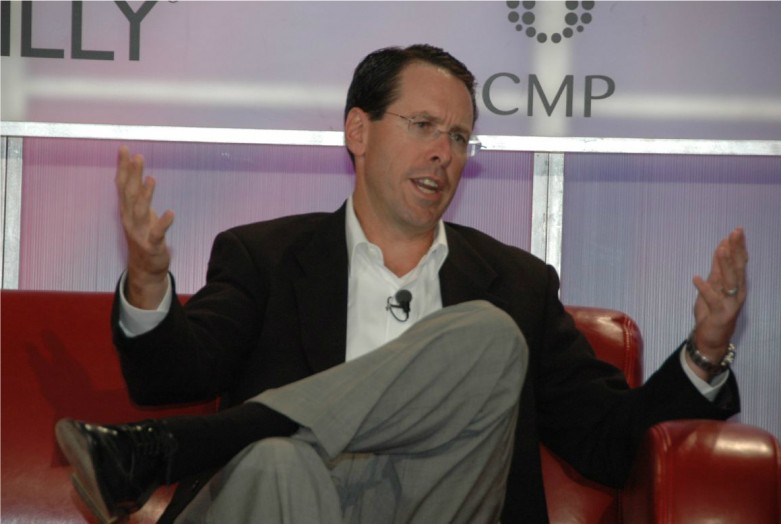 On Wednesday, AT&T threatened to push pause on its alleged commitment to bring fiber connections to 100 U.S. cities. The reason for the delay? AT&T CEO Randall Stephenson (pictured) says the company can’t move ahead on this project until the FCC decides whether it’s going to pass rules to protect Net Neutrality.

Stephenson’s bluff marks the company’s latest effort to scare the FCC from reclassifying Internet service providers under Title II of the Communications Act — an option President Obama and millions of Americans favor.

There’s very little behind this threat. “AT&T has a track record of using its pre-determined investment plans as a carrot or a stick for regulators,” said Free Press Research Director S. Derek Turner. “The truth is that AT&T’s fiber investments were more of a branding exercise than a substantial investment in deployment.”

During the past decade of unprecedented deregulation, AT&T’s investment in building out fixed-line networks has dropped year after year, according to Karl Bode of DSLReports.

The company has been more focused on its profitable wireless services, Bode writes. “When there is a modest expansion in their ‘next-gen’ U-Verse service, the company generally massages the numbers to make those expansions seem larger than they actually appear.”

AT&T has told investors that its fiber deployments, called GigaPower, would have a minimal impact on its capital spending, a sign that the buildout plan was selective, targeted and not on the immediate horizon.

“AT&T is once again talking out of both sides of its mouth,” Turner said. “AT&T has made its GigaPower fiber deployments the central commitment in its case for its near-$70 billion merger with DIRECTV. If it wants to pause that deployment, then its entire public interest case for the merger, which was paper-thin to begin with, collapses.”

Numerous Wall Street analysts and other experts have noted that a return to a deregulatory application of Title II will have zero impact on the ISPs’ revenues and profits. Even AT&T described this framework as applied to its enterprise-broadband services as an “unqualified regulatory success story.”

AT&T’s own stock price has risen since Obama’s announcement on Monday; this, more than anything else, shows that investors aren’t worried about a return to Title II’s deregulatory oversight.

“The truth behind AT&T’s announcement is rather benign, and is in plain sight for all to see,” said Turner. “AT&T just spent $2.5 billion on Mexican cellular company lusacell, a purchase that many analysts note will require billions more in additional capital to make this third-place carrier more competitive.

“Because of this purchase, AT&T just this week told investors that it’s refocusing its capital plans and withdrawing from the in-flight Wi-Fi market. AT&T’s announcement today is merely a politically convenient claim designed to score points in Washington. AT&T’s pause predates the president’s announcement supporting a return to the deregulatory application of Title II.”