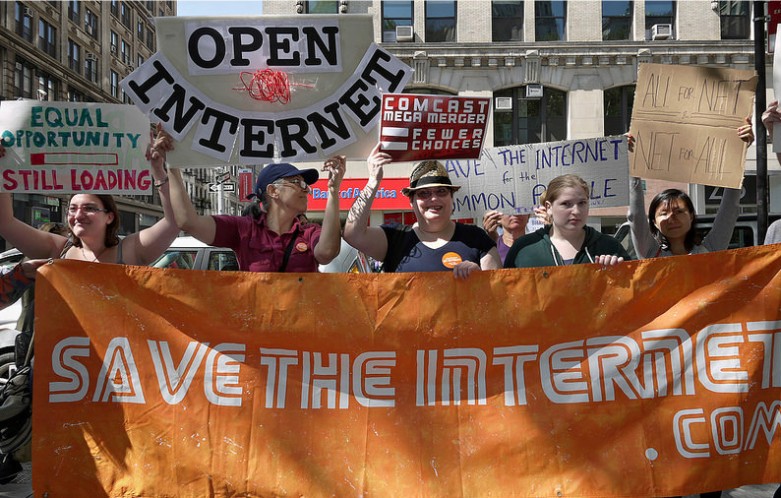 Obama, the Telcos and Getting Net Neutrality Right

In November, President Obama called for strong Net Neutrality protections, making good on promises to support the open Internet by urging the Federal Communications Commission “to make sure that consumers and not the cable companies get to decide what sites they use.”

The president was following the lead of millions of Americans who had already urged the FCC to stop phone and cable companies from playing favorites with some websites while degrading access to others. The solution that Obama and so many others have called for? The FCC must reclassify Internet-access service under Title II of the Communications Act.

But companies like AT&T, Comcast and Verizon have spent hundreds of millions of dollars to stop the FCC from taking that vital step.

And opposition to Obama's Net Neutrality statement has come from unlikely bedfellows ranging from Sen. Ted Cruz, who tweeted that Title II is “Obamacare for the Internet” (it's not) to Rev. Jesse Jackson, who claimed that the rule would take jobs from minorities (it wouldn't).

With so much nonsense, the editors of our most established newspapers have stepped into the fray to set the record straight.

Last Sunday, the Washington Post wrote that FCC Chairman Tom Wheeler needs to balance the needs of Internet users against fears that ISPs will stop investing in network upgrades should the agency adopt Title II. “Mr. Wheeler has taken a lot of flak, but he is right to seek a balance,” the Post wrote. “The goal is to bar unreasonable behavior without discouraging investment in ever-more-robust networks.”

In reality, such user protections do not hurt investment. Free Press found that the average annual investment of telecom companies like Verizon was 55 percent higher under Title II than it's been in the years since the FCC removed the rule from broadband services. Despite their comments to the press and on Capitol Hill, cable and telecom execs routinely assure shareholders that Title II would not impact their plans to improve networks or increase their profits.

Even today, the prospect of a return to Title II hasn't hampered investment. Wireless companies have broken all previous records in their bidding for access to airwaves the FCC is now selling. The auction — which would allow wireless companies to expand their mobile-broadband businesses through new swaths of spectrum — had gone through 30 rounds of bids by Friday to exceed $38 billion, more than three and a half times the $10 billion reserve set by the FCC. The amount these companies ultimately pay could climb even higher before the auctioneer's gavel drops.

According to industry analysts, telecommunications companies also invested a whopping $70 billion in Title II-classified carrier Ethernet services in 2013 alone, and are expected to spend $100 billion by 2017.

The Post isn't the only distinguished paper spreading misinformation.

At the Los Angeles Times, the editorial board raised the phony specter of plummeting investments. But it didn't stop there. Times editorial board writer Jon Healey wrote that Title II is the “most stringent approach” to protecting the open Internet. He added that “much of Title II was not written with the Internet in mind” and claims it would create a legal quagmire and stifle innovation.

Actually, Title II is a successful legal framework that Congress intended for two-way communications services, of which Internet access is the most essential. The common-carriage principles embodied in Title II work across the U.S. economy.

Common carriage applies to wireless phone services and more than 1,000 small carriers offering DSL and fiber access. It applies to other competitive markets as well — everything from airlines, parcel shipping and private buses to department-store elevators and Disney roller coasters. This framework hasn't stifled any of these businesses. Many are profitable, some extremely so.

Healey also makes the false claim that restoring Title II would automatically take new options off the table. He points to wireless-carrier plans that provide “free” data for music apps and a limited number of social networks like Facebook. Yet carriers are allowed to argue under Title II that these plans benefit their users.

Of course, allowing special exemptions from data caps begs the question of why providers have caps in the first place, because it obviously doesn't matter how much data you use — only where that traffic comes from. But Title II alone doesn't necessarily ban such plans. It just gives the FCC the power to step in and protect users when necessary.

A little over a decade ago, a George W. Bush-era FCC buckled under immense pressure from phone and cable industry lobbyists and abandoned Title II law and precedent in favor of an approach that has given consumers nothing but fewer choices and higher prices.

The Supreme Court later declared that the FCC had the discretion to determine whether Internet-access service fell under Title I or II of the Telecommunications Act. If the agency now decides to reverse its past mistakes, it would have the backing of the nation's highest court.

These are the facts that newspaper editors and others need to get right. By reclassifying access services under Title II, the FCC would preserve Net Neutrality with the flexible framework that enables free expression and choice online while allowing communications businesses to thrive.

It's a path forward that the president, the courts and the marketplace have tested and blessed — and one that guarantees that Internet users (and not just a few phone and cable giants) can reap the rewards of the Internet economy.