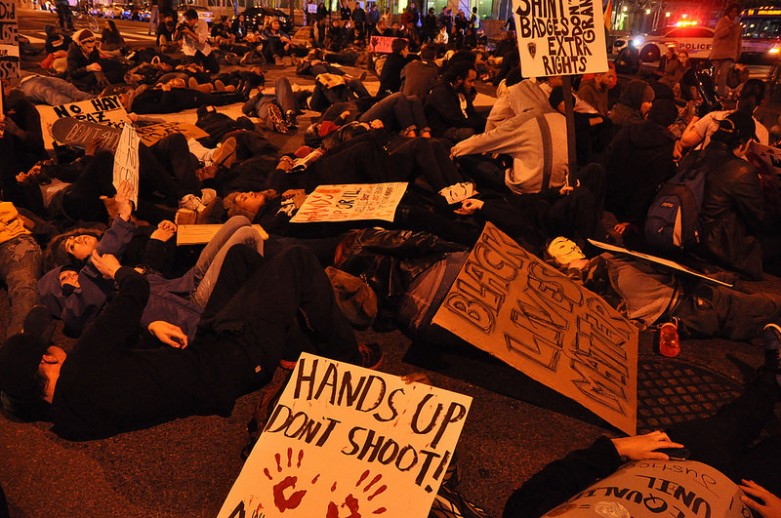 Last Monday night, I was struck by the fear that washed over me after the announcement in the Michael Brown case. Fear because I live in a country that blatantly disregards the value of some people simply because of the color of their skin. People who look like me.

When prosecutor Robert McCulloch announced that a St. Louis County grand jury decided not to indict former police officer Darren Wilson in the shooting of 18-year-old Brown, I wasn’t surprised by my disappointment, anger or sadness. It was the fear that shocked and worried me most. The announcement served as yet another reminder that every time I leave my house, I’m taking a chance with my life. Not only am I more likely to be the victim of police violence, but a white perpetrator might not even be charged with a crime against me.

Since I was too afraid and upset to do anything else, I stayed glued to my Twitter stream for hours, seeking some sort of comfort. “I wish I were surprised. #FergusonDecision,” I tweeted. Nearly 400 people retweeted this — and seeing how such a simple tweet resonated made me realize that the community I needed to get through all of this was online.

For most of the Thanksgiving weekend I stayed on Twitter, watching a series of actions unfold across the country in response to the grand jury’s decision. Most of the updates I saw were not from traditional media outlets but from the social media accounts of people on the front lines. In spite of being physically isolated from the activists doing work on the ground, I never felt alone.

And I was able to find this community because of the open Internet.

The first call to action I saw after McCulloch’s announcement was for a boycott of Black Friday. For the first time in my adult life, I didn’t participate in Black Friday — in person or online. When I urged my family to do the same they followed suit.

The announcement of #BlackOutBlackFriday spurred many important conversations online about the economic ties to structural racism. While many people said that a boycott would be useless, there were reports of a noticeable drop in purchases.

We don’t know whether this decline resulted from the boycott. But the open Internet allowed word of this action to spread quickly and widely.

This Internet — and all the possibilities it provides — is under threat as the FCC’s decision on Net Neutrality hangs in the balance.

Talking Back to Mainstream Media

Many of the protests included clashes with the police and resulted in activist arrests in many cities. While mainstream outlets covered these arrests and related disruptions, I couldn’t find any accounts on these platforms of physical force used against protesters.

In contrast, all of these outlets covered the violence and destruction of property in Ferguson the night the decision came down. When I read the post of a Facebook friend on Thanksgiving Day, it became apparent that many stories were not being told.

My friend shared a link about the #StopTheParade protest in New York City, saying that the statements from police about the arrests was inaccurate. The protestors weren’t “anarchists” and they didn’t knock over police barriers; rather, the officers threw the barricades against the activists. Police attacked many of the protesters, and seven of them were subsequently arrested.

Considering that this movement is a response to police killings of unarmed black Americans, the ability to share the truth about our own stories is crucial. The open Internet enables the most marginalized to hold the most powerful institutions accountable.

The actions across the country (and even across the pond in London) are not just inspiring and empowering — they’re comforting. Thanks to the open Internet, activists have been able to mobilize and share their actions with the world.

On Friday morning, activists from the BlackOut Collective in California staged an action called #BARTlockdown where they chained themselves to two BART trains at the Oakland station. On top of the chains were black tubes that said in bright yellow letters “BLACK LIVES MATTER.”

As people gathered outside the station and waited for the police to arrive, they sang songs of black empowerment. As I watched the livestream, I felt encouraged about the future of the movement for racial equality. Activists chanted “Amandla Awethu” (“Power to the people”), mostly known for its use in the struggle against apartheid.

As my colleague Candace Clement wrote last week, which stories are told in our culture (and how they’re told) is a life-or-death issue. This is true not just in the literal sense, but also in a spiritual sense. Racism has a very real impact on the emotional well-being of its victims. The public expressions of support and affirmation that yes, contrary to what the Ferguson grand-jury decision implies, Black lives do matter helps counter the psychological scars of living in a society that doesn’t value all who are in it.

Last week’s actions were just the beginning. On Monday, images of #HandsUpWalkOut protests dominated my social-media streams. As the police officer who killed the unarmed Eric Garner escaped indictment today, it’s clear that the stakes are high. As soon as this decision came down, news of #JusticeforEricGarner protests started to spread online.

If the FCC fails to protect real Net Neutrality, we’ll lose this ability to share and access the information we need to mobilize against injustice.