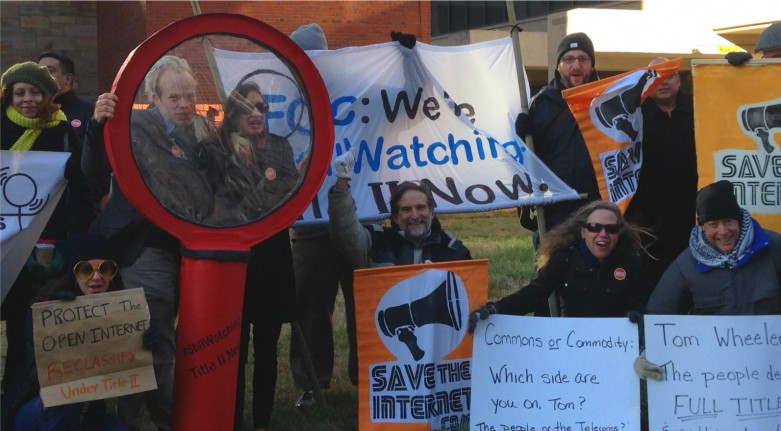 December 12, 2014
Net Neutrality
The FCC and Media Policy
Free Press on the Ground

On Thursday morning, I was part of a crowd that braved the cold to show the FCC that we’re still watching — and waiting for real Net Neutrality.

We gathered early outside FCC headquarters, where the five commissioners were beginning their final meeting of 2014. Brandishing signs, banners and giant magnifying glasses, we showed up in person to give the agency another push to make a decision on Net Neutrality. Millions of people around the country have urged the FCC to reclassify Internet-access service under Title II — and we’re tired of the delays.

“Ver-I-zon, COM-cast, F-C-C, we want Net Neu-tral-ity!” the crowd chanted. People have been chanting this at rallies around the country as momentum has grown for strong Net Neutrality protections.

Free Press President and CEO Craig Aaron took the megaphone and summed up why we were out there on such a blustery morning. “There are too many phone and cable lobbyists whispering in Tom Wheeler’s ears right now,” he said. “We need to make sure he hears the voices of the people.”

One by one, people came up to demand that the FCC move to reclassify. Some read comments Free Press members in the D.C. area submitted to the agency.

“Please heed the will of 99 percent of Americans and save the Internet from cable companies that will make fast lanes for the rich and slow lanes for the rest of us.”

“I own a very small business that is highly dependent on open access to the Internet and as such, I cannot afford second-class Internet access. … I urge you and the FCC, in the strongest terms possible, to discard your proposed rules and reclassify all Internet service providers as common carriers.”

“The thing that should matter to you most is how the PEOPLE feel about this, not how service providers feel. You are supposed to represent us, not the whims of big business. Do the right thing and protect Net Neutrality.”

“It was cold out there at the @FCC this morning, but mega-important to rally to let them know we’re #stillwatching!” the Future of Music Coalition tweeted.

Free Press, our allies and activists have been organizing Net Neutrality rallies around the country for months, and hundreds continue to show up. People care deeply about the future of the Internet, and are even willing to stand out in the freezing cold to defend it.

We’ve come a long way since the January court ruling. The surge of public support for Net Neutrality has pushed the FCC closer than ever to considering strong rules. And the demand for real open Internet protections won’t go away, no matter how long regulators delay.

We’ll keep the pressure on until the FCC reclassifies. If the agency goes that route, we’ll have their back. Unless and until that happens, we’ll keep coming back, again and again.

Stay tuned, and don’t give up! And in the meantime, check out a few inspiring pics from Thursday’s event: