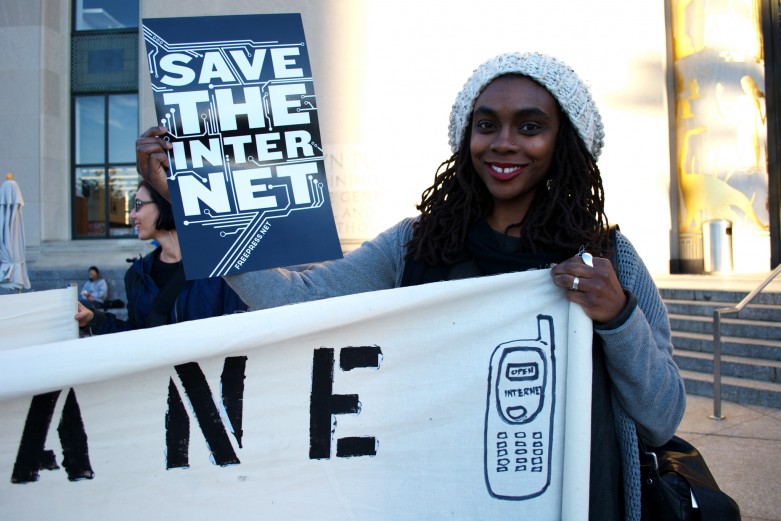 Time for Net Neutrality Opponents to Reconsider Their Position

For years, major Internet service providers like AT&T, Comcast and Verizon have told the FCC and Congress that adopting strong Net Neutrality rules would harm investment and prevent companies from building out their broadband networks.

This is the central argument ISPs have made to prevent the FCC from adopting real open Internet protections.

And some legacy civil rights groups have echoed this claim, insisting that Net Neutrality would harm communities of color by deterring investment and widening the digital divide.

But over the past few weeks, this argument has been exposed as nothing more than a ruse meant to deceive lawmakers, regulators and the public.

"I mean to be real clear, I mean this does not influence the way we invest. I mean we're going to continue to invest in our networks and our platforms, both in Wireless and Wireline FiOS and where we need to. So nothing will influence that. I mean if you think about it, look, I mean we were born out of a highly regulated company, so we know how this operates."

This is a far different story than the one Verizon and the other ISPs have been telling in Washington. But the company was forced to tell the truth at this conference because it's unlawful to deceive investors.

And Verizon wasn't alone. CEOs and financial heads of Charter, Comcast and Time Warner Cable also said during the same conference that strong Net Neutrality rules would not discourage investment.

It might be surprising to hear these company leaders speak the truth, but we've known for some time now that the ISP investment argument was a lie. Indeed, groups like Free Press have been explaining this reality for years, noting that regulation is not a key driver of investment decisions.

The acknowledgment from the ISPs' own top executives comes at a critical moment in the Net Neutrality debate, since the FCC is expected to decide soon whether to adopt real open Internet rules -- or to allow ISPs to discriminate online.

And companies like AT&T, Comcast and Verizon have spent millions lobbying Congress and the FCC over the past year to prevent the Commission from reclassifying broadband providers as common carriers -- which is the only way to protect the Internet.

For too long it appeared that the industry's false claims on investment were taking root. After the FCC's rules were struck down last January, Chairman Tom Wheeler subsequently proposed rules that would allow ISPs to create slow lanes online for those that couldn't afford to pay new tolls.

But Wheeler had to reassess his plan after a record number of people and dozens of members of Congress protested this approach. In November, President Obama called on the FCC to pass the strongest Net Neutrality rules possible. That meant, Obama said, treating ISPs as common carriers to prevent online discrimination.

Unfortunately, this public outcry hasn't stopped the companies and their allies from continuing to push their dishonest investment argument in their effort to kill the open Internet.

Industry front groups like the Hispanic Technology and Telecommunications Partnership continue to recite the industry's deceptive talking points on this topic.

And the industry may also continue to draw support from legacy civil rights groups, even though parroting the ISPs' false claims runs counter to what the ISP execs revealed to their own shareholders.

Many are surprised to learn that legacy groups like the NAACP and LULAC that oppose strong and enforceable Net Neutrality rules also enjoy a close relationship with the major phone and cable companies.

A new report from the Center for Public Integrity, for example found that the National Urban League, which opposes real Net Neutrality, has received significant financial donations from industry players like Comcast.

The Comcast Foundation awarded nearly $2 million to the Urban League and its affiliates in 2012-2013. The Verizon Foundation gave $590,000 during the same period. Meanwhile, David Cohen, Comcast's powerful executive vice president (and head of its foundation), sits on the Urban League's board of trustees, as do representatives from AT&T and Verizon.

Given that the ISP execs have now debunked their own investment argument, will groups like the Urban League reconsider their position on Net Neutrality?

Or will they oppose President Obama's call for strong rules?

Will they change their position considering how the open Internet has facilitated greater political activism and consciousness, especially among younger members of our community?

This activism has demonstrated that protecting the open Internet is a critical racial justice and human rights issue. The Internet has allowed Black and Latino activists to mobilize against unjust criminal justice and immigration policies.

This activism led Obama to grant millions of undocumented immigrants relief from deportation. And the open Internet has also enabled people to organize massive demonstrations against the police killings of unarmed black men, women and youth.

So as we enter 2015, perhaps it's time for the civil rights groups that have aligned themselves with AT&T, Comcast and Verizon to make a New Year's resolution and stop using industry talking points that have been discredited.

Instead, we hope such groups will join the growing number of racial justice leaders who are fighting to ensure our voices will always be heard online -- and never silenced.