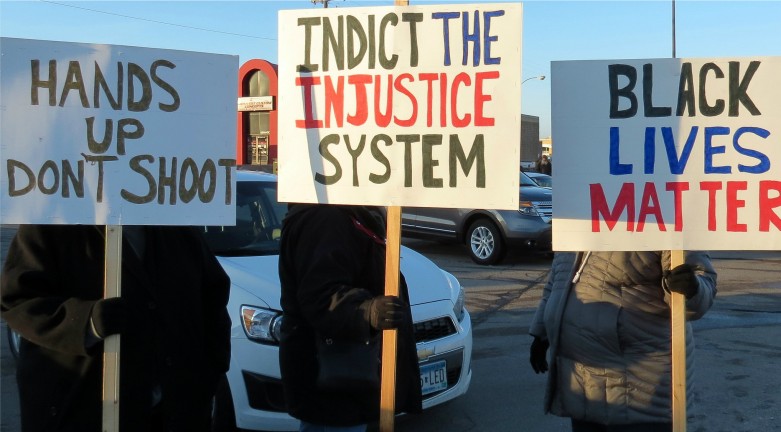 Turn Up: 21st-Century Black Millennials Are Bringing Direct Action Back

At 7:30 a.m. on a rainy Monday morning, a multiracial team of activists led by Black millennial direct action groups Blackout Collective, #BlackBrunch and Black Lives Matter accomplished what had never been done before. They shut down police headquarters in downtown Oakland, Calif., for four hours and 28 minutes. Four hours, they said, to represent the length of time the dead body of unarmed Black teenager Michael Brown lay in the street after he was shot by a white police officer, Darren Wilson; 28 minutes to signify the fact that a Black man, woman or child is killed by police or vigilantes every 28 hours, according to 2012 study called "Operation Ghetto Storm," conducted by the Malcolm X Grassroots Movement.

"We fight for justice for every single Black life that has passed at the hands of police," said organizer Deirdre Smith. "But we must also stand up and shut down the Oakland Police Department for the Black and breathing who are at risk of the same fate."

Dressed dramatically in all black, members of the Collective marched in lockstep announcing themselves as "Black ... and breathing," before raising one fist in salute to lives lost. That, and other images, flooded social media, commanding thousands of re-tweets and shares under the hashtags #BlackLivesMatter, #BlackAndBreathing and #ShutDownOPD.

Black organizers were joined by a team of Asian leaders using the Twitter hashtag #Asians4BlackLives and white allies from the Bay Area Solidarity Action Team using the hashtag #SilenceIsViolence. Together, this multi-racial and multi-generational team chained themselves to police department doors, while simultaneously blocking two intersections. For nearly five hours they stopped traffic on the street leading to the police department and prevented access to the building.

"Allies, are you with us?" they asked, as more than 250 protestors, including Latino activists carrying signs that read Justice4AlexNieto, joined them in a call-and-response chant, "This is what solidarity looks like! You are what solidarity looks like!" While they chanted, one young man scaled a flagpole to hang a flag bearing the faces of unarmed Black men, women and children killed by the police. Thousands more watched the streaming video feed and shared the images and stories seen in this action video on social media.

We Put Our Bodies on the Line

In Oakland, Blackout Collective and Black Lives Matter activists locked down the West Oakland BART station on Black Friday. A week later, the #BlackBrunch team marched into crowded restaurants in Oakland's majority-white Rockridge neighborhood, where they recited the names of Black people killed by police, their voices rising over the clank of dishes and the stunned silence of families out to brunch. These Oakland-based collectives of young Black leaders have led marches to the courthouse steps and raised fists in front of the police department, sending images of Black resistance bouncing across the globe. In just a few short months, Black millennials have brought Black civil disobedience into the 21st century, and their demands are as visionary as their actions.

This amazing display of strategic coordination and tactical discipline represents a new era of social protest methodology that seeks cultural as well as political and economic change. These leaders refuse to cooperate with the business of anti-Black racism as usual. Armed with protest songs and a shared vision, backed by allies across the lines of race and age, and communicating on multi-directional digital platforms, a new generation of Black activism is being born. In this new era, while demands are being leveraged at the federal level, action is taking place at home, where Black bodies continue to stack up, and police officers, security guards and vigilantes -- most often white -- take comfort, even gloat, in their impunity.

The tradition of Black non-violent direct action in the Americas isn't new. From enslaved Africans to Black labor activism, Black communities have long used tactics of non-violent confrontation and non-cooperation to resist extreme repression, expand political imagination and point the way toward a long-term vision for change. Direct action tactics in Black communities have evolved from a long tradition of Black resistance that builds collective power and centers Black dignity, humanity and life through direct confrontation with the representatives and institutions of power.

In 1966 my mother, Janet Cyril, and her friend, popular performance artist Laurie Anderson, left their small Midwestern liberal arts school and boarded a train to New York City, where they would join the Student Non-Violent Coordinating Committee (SNCC).

SNCC emerged from a student meeting organized by Ella Baker and subsequently escalated the tactics of the civil rights movement from lunch counter sit-ins and boycotts to an era of Black direct action opposing segregation and white vigilante violence in the American South and throughout the United States. It was this energy and agency that brought us the Freedom Rides, Freedom Summer, and the birth of the Black Panther Party in 1966. It is this political moment that radicalized my mother and motivated her to become a leader in the New York Chapter of the Black Panther Party.

We are in a similar moment of Black radicalization today, one in which self-organized groups of Black millennials will -- with deft, precise, and coordinated direct action tactics -- shape a narrative on race and power that, in the process of uplifting Black lives, improves conditions for everyone. From the 1970s "culture of poverty" theories to the mass criminalization of Black communities in the 1980s and 90s, Black communities have long been the subjects or objects of debate. This moment of direct action, however, rejects the forceable control of Black racial identity, political power, and economic position through biased and brutal policing. Instead, it casts Black people as the leading protagonists in a story about race, power and resistance where we are both character and author.

The Next Generation of Black Activism Is Here

A new generation of Black leaders is drawing upon the lessons of 20th-century movements for civil rights and political power, while simultaneously bringing to bear a human rights analysis, cultural strategies rooted in a Black aesthetic, and 21st-century communications technologies to craft a sophisticated local-to-local movement that is both organic and deeply rooted in relationships, disciplined and willing to take risks. Within that movement, direct action by and for Black people is resurfacing as core tactic and a profound reclamation of agency long denied.

This emerging movement of Black millennial activists, with significant leadership from young Black women, has grown beyond earlier strategies that sought access to political power and full citizenship through civil rights legislation. Instead, these passionate leaders are using creative direct action tactics to both win new public policy and transform the vehicles of power itself. In the context of persistent voter suppression, the growth of mass incarceration, and an economy that either excludes or exploits Black labor, groups like the Blackout Collective, #BlackBrunch and Black Lives Matter are affirming the resilience and agency of Black people -- on their own terms.

We Have Nothing to Lose but Our Chains

From the streets of Oakland, Calif., to Ferguson, Mo., and across the country, Black-led direct action is prophetically bringing a powerful vision for change to a dispossessed Black generation, to the pulpit, and even to the athletic field. They do not ask for permission. They turn up, not down. To win a future worth fighting for, a young Black movement is finding its voice, and it's saying loud and clear: Because Black lives matter, we will honor our dead and fight like hell for those Black bodies still breathing.

Just as young immigrant rights activists bravely declared themselves "undocumented and unafraid" in direct opposition to a broken immigration system, these courageous young Black leaders are boldly confronting a broken system of racist policing and incarceration that continues to fracture Black communities.

As of 2014, direct action is the new Black, and we ain't gonna let nobody turn us around.