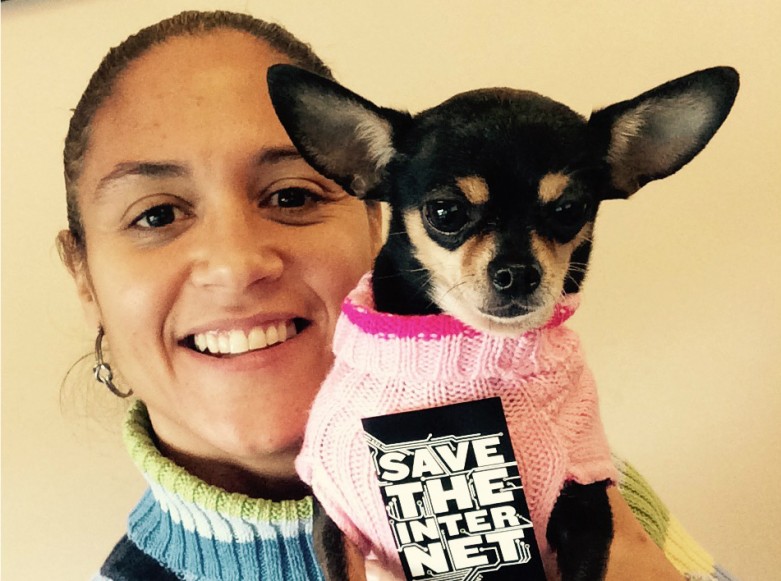 Why I Fight: The Open Internet Has Changed My Life

I’m not what you’d consider a super activist. I don’t sign every petition I receive, I don’t attend every protest or rally I’m invited to, I don’t donate to every organization that solicits me. But it’s because of the Internet that I can fight for what I believe in.

And that’s why I fight for real #NetNeutrality — to ensure that the Internet remains a space where free expression can flourish.

The open Internet has changed my life in profound ways. I didn’t get to grow up with my sister, who’s seven years older than me. We lost out on many, many years together. But thanks to the Internet, we’ve been able to connect and bond in a way that I don’t think would have been possible before. It was her birthday recently and although she lives in Puerto Rico I was able to share in her special day, in real time.

Having an open Internet is priceless, but that doesn’t mean that Internet service providers have the right to control how I connect with my sister. This is why I fight for Net Neutrality every day at Free Press.

When I’m not working at Free Press or teaching Zumba, I’m online connecting with groups like ColorOfChange.org, which works hard to strengthen Black America’s political voice. These organizations educate me on important human rights and social justice issues so that I can take action and be part of a larger community fighting for the greater good. And I can fight for the causes I care about online by signing petitions, sharing messages and donating.

The Internet allows me the freedom to financially support the causes I care most about, like the AIDS Foundation of Western Massachusetts and the Breast Cancer Research Foundation. Having lost my father to AIDS and watched a good friend battle (and beat!) breast cancer, it’s very important to me that I do what I can to help find a cure for both diseases. It’s also fitting that I would use the Internet to fight for Internet freedom, press freedom and a stronger democracy: This is why I don’t just work at Free Press — I also support it.

I fight because if I don’t I’m giving the groups that want to kill Net Neutrality more power and I will not be the reason we don’t win real Net Neutrality!

Check out the earlier posts in our “Why We Fight” series:

Why I Fight: To Promote Women’s Voices Online

Why I Fight: Because Free Press Members Inspire Me

Why I Fight: So Everyone Can Amplify Their Voices Online

Why I Fight: To Preserve the Internet’s Level Playing Field