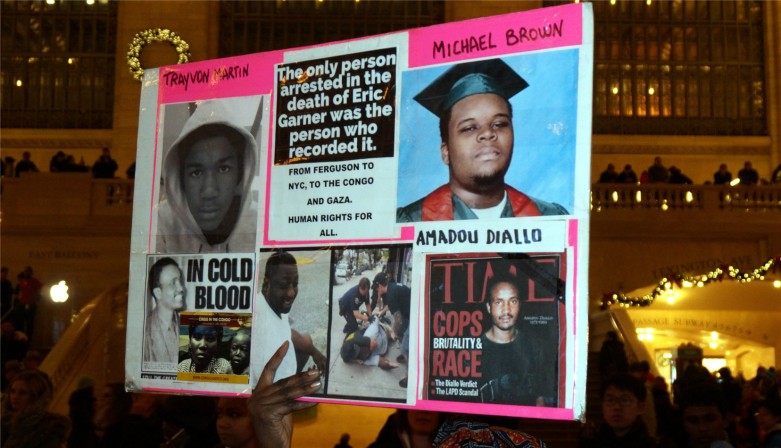 Black Lives Depend on a Free and Open Internet

In 2012, I watched as cable news stations posthumously put Trayvon Martin on trial for his own murder, and broadcasted his killer’s acquittal, George Zimmerman.

Black Lives Matter was born as a social media response to this verdict, meant to interrupt a public narrative that criminalizes and devalues Black people’s lives in America. With support from techies, designers, artists and thousands of activists across the country, Black Lives Matter is now an online to offline political movement, affirming the humanity and resilience of Black communities.

The continued growth of this movement and its capacity to respond nimbly and effectively to the brutal and biased policing of Black communities depends, in part, on access to a non-discriminatory Internet.

But right now Black online voices are threatened. The Federal Communications Commission is drafting and preparing to vote on new rules that will either preserve the level online playing field we’ve enjoyed for the last several decades, or destroy it.

The FCC can take a clear path to prevent discrimination online. The agency can reclassify broadband as a common carrier service under Title II of the Communications Act. Reclassifying the Internet with strong, bright-line Net Neutrality rules can guarantee every Internet user’s right to connect with any person or website, on any device or cell phone, without discrimination, censorship or other interference.

So why are some against Net Neutrality?

Because there is money to be made in creating two Internets, one for wealthy corporations, individuals and institutions that can afford to pay for better and faster access (i.e., control), and another second-class version for everyone else.

Telecommunications companies are very clear that discrimination is a lucrative business. That’s why they’ve lined up seemingly strange bedfellows to oppose an open and free Internet. Jesse Jackson, the National Urban League (NUL), Comcast, Verizon, AT&T, Donald Trump and Sen. Ted Cruz have teamed up to change the Internet to an unequal one in which Black voices may have to pay more to be heard.

Recently, the National Urban League ran a series of paid advertisements in a political newspaper rallying against Net Neutrality, while simultaneously saying nearly nothing on its own website about the issue.

NUL’s CEO Marc Morial makes 10 times as much as the average Black worker, so in some ways it’s not surprising that his organization claims that Internet policies making money for Comcast and other telecommunications donors are the right choice for working people. Trickledown economics didn’t work for Black communities in the 20th century, and it won’t work now.

The civil rights movement of the 21st century must choose an Internet that works for all people, not just those who can afford to be heard. That’s why I’m in lockstep with the nearly 4 million voices that have called on the FCC to uphold real Net Neutrality. This coalition includes facets of every social justice movement from climate, reproductive and rural rights to immigrant rights and the new racial justice movement — alongside President Obama, artists, business owners, legal analysts and tech experts.

The next two months will likely define the future of the open Internet. The FCC should act as swiftly as possible to draft and vote on rules it can enforce.

Black Twitter broke the story of the murder of an unarmed teenager, Michael Brown, in Ferguson, Mo., by police officer Daren Wilson, while consolidated broadcast and cable industries lagged behind. From unarmed Black father John Crawford, murdered by police in an Ohio Walmart, to Aiyana Stanley-Jones, a Black 7-year-old murdered by police while she slept in her home, the open Internet allowed Black communities to tell these stories with our own voices.

#BlackLivesMatter was born online, but now lives in street actions, in conversations in our homes, and in the dignity swelling in our hearts. That is the power of the open Internet, and it is why we must do everything we can to protect Black voices. Our lives depend on it.

Cullors is co-creator of Black Lives Matter, director of the Los Angeles-based organization Dignity and Power now, and a leader in the Media Action Grassroots Network.