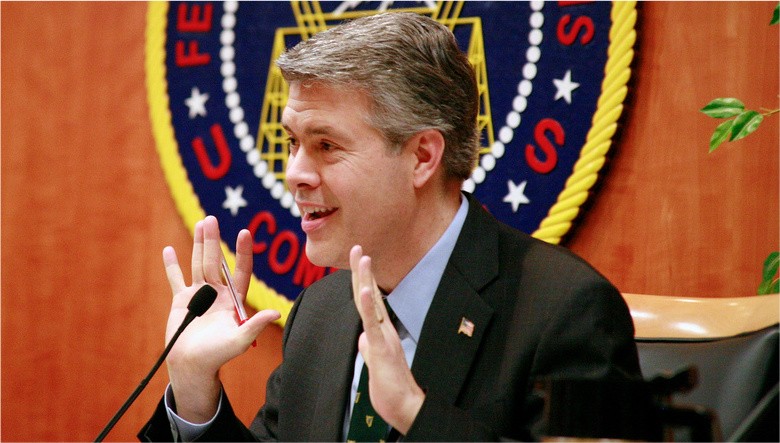 Robert McDowell testified Wednesday before the Senate Commerce Committee on a fake Net Neutrality bill with a lot of flaws. McDowell’s testimony had a lot of flaws too.

He started off the week by previewing his bad arguments in the Wall Street Journal.

Maybe not every word was false in that Op-Ed.

After all, there were a few grains of truth tucked into his bio. McDowell is indeed a former FCC commissioner. And he is in fact employed by the large cable and telecom industry law firm Wiley Rein in Washington, D.C.

But that’s about it.

Where to begin debunking this tissue of lies and talking points?  Let’s start at the top.

Wrong on the Law

Yes, the Federal Communications Commission is slated to vote on Net Neutrality rules in February. But that vote has nothing to do with “lunging to seize unlimited power over the Web,” as McDowell sputters. It’s about returning to the law — Title II of the Communications Act — that Congress updated on a bipartisan basis at the outset of the Internet era.

Yes, the FCC twice lost in court on its earlier attempts at Open Internet rules, but never on their substance or their importance.  Under both Republican and Democratic chairmen, the FCC lost because the agency ignored its rightful authority to craft rules under Title II. It also lost sight of its congressional mandate to ensure that everyone can send and receive the information of their choice online.

And the 2005 Supreme Court ruling in the Brand X case the Op-Ed references said nothing about the bogus harms McDowell invents for this piece. That case simply deferred to the FCC and said the agency had discretion to interpret the Communications Act when deciding whether broadband belongs in Title II.

So it’s the agency’s call, according to a majority of the Court. McDowell is absolutely wrong when he implies that the justices agreed with the FCC’s classification decision on the merits. The ruling says only that the FCC gets to make the determination itself.

Free Press has shown time and again that when the FCC made that determination, it got it wrong. In fact, the Brand X decision came over the dissent of Justice Antonin Scalia, who said broadband Internet access providers clearly do offer a telecom service to customers, and who thought it absurd of the Bush-era FCC to say otherwise.

Wrong on the History

Net Neutrality simply means that your broadband provider can’t unreasonably interfere with or discriminate against the choices you make online. This protection should hold true for Internet access just as it has for other kinds of telecom services. You should have the same rights — whether you’re placing a phone call, sending an email, visiting a webpage, or using an app or service that runs over a broadband connection — to connect and communicate with whomever you want.

Hired guns shilling for cable companies and wireless carriers insist that Title II is outdated and shouldn’t apply to Internet access. But what’s old-fashioned about basic nondiscrimination rules?  These protections have always been vital for commerce and free expression, and they always will.

These laws aren’t confined to the “Depression era,” as McDowell claims, nor are they designed solely for monopolies.  They apply to all sorts of more competitive and deregulated sectors like wireless voice, enterprise broadband services sold to big-business customers, and the DSL offerings of more than a thousand rural providers.

Such “common-carrier” rules apply to other competitive industries and public accommodations too, because unreasonable discrimination is bad news no matter how some people try to dress it up as a benefit.

Yet no one other than advocates for the big phone and cable companies is talking about “regulators potentially setting rates, terms and conditions” for broadband.  This upcoming FCC vote is about restoring the public’s rights — and the rights of big and small businesses alike — to free expression and innovation online.

Wrong on the Politics

Not satisfied with ignoring reality on the substance of the rules, McDowell moves on to butchering the politics. He suggests that Republicans and Democrats are trying to work out a deal on legislation.  That’s sort of true, except for the part about Democrats.  And Republicans.

Yes, a few lawmakers in charge of congressional committees, along with a few former officials like Mr. McDowell, are now pushing a Net Neutrality workaround. But it’s one that would hamstring the FCC from protecting Internet users.

What’s far more likely is that some of the new bill’s proponents have received the latest marching orders from the cable and telecom companies that fund their campaigns and pay their salaries.

Though an overwhelming majority of self-identified conservative voters support real Net Neutrality rules, many elected officials who depend on cable and telecom cash to stay in office are ignoring their own constituents.

Meanwhile, the minority leadership in Congress has given no sign that it wants to obstruct the FCC’s process or go against the president’s statement that we should reclassify broadband providers under Title II.

It’s clear that McDowell wants to hit the pause button on the FCC process.  That’s what losers do:  stall for time.  The biggest broadband providers are desperate right now and will do anything to delay the FCC from implementing strong open Internet protections.

But FCC Chairman Tom Wheeler is listening to Internet users and innovators.  And he’s signaled that he’s fed up with the debunked broadband-industry lies that folks like McDowell keep peddling.

Dead Wrong on the Facts

McDowell claims that no phone, wireless or cable company has ever opposed keeping the Internet open.

Except that AT&T started this whole fight a decade ago when it announced its hopes to start double-charging for websites using the company’s “pipes.” Since then, Comcast and Verizon have sued to overturn FCC rules that prevented them from blocking lawful content. These companies have contended that they should be able to exercise “editorial discretion” over our Internet usage — charging us new access fees and premiums in the process. And they’ve continually crossed the line on Net Neutrality and pushed the envelope on blocking and discriminating against Internet users.

McDowell claims that restoration of basic nondiscrimination protections would harm broadband providers’ investment levels — an argument the providers themselves have debunked.  Just last month, top executives at Comcast, Verizon, Time Warner Cable and Charter told their investors the truth:  Title II won’t harm investment in our nation’s broadband infrastructure. And just last week, Sprint became the first big wireless telecom provider to tell the FCC that it will keep investing under rules based on Title II.

Last but not least, McDowell also claims that Title II could lead to $15 billion in new taxes on Internet users.  He says that’s a “whopping” figure, but really it’s just another whopper. This is a tired hoax that just last Friday received an “award” of three Pinocchios in the Washington Post’s Fact Checker column.  Free Press has debunked this notion several times over, showing there’s zero evidence for the argument that Title II leads straight to new taxes or fees.

Sen. Ron Wyden, author of the federal Internet Tax Freedom Act that places a moratorium on such taxes, called these tax claims “baloney” more than a month ago.  McDowell’s brand of baloney is especially stale.

Despite McDowell’s suggestion to the contrary, the process of forbearing from Title II requirements isn’t arbitrary or capricious.  It’s the routine exercise of a power that a bipartisan Congress gave the FCC to promote competition, and it’s what makes Title II both flexible and powerful for the task at hand.

Title II provides the sort of legal certainty that lawmakers and companies all say they desire — until they’re “certain” that the chosen approach has real teeth and real ability to protect consumers. So arguing that use of Title II would deprive the Federal Trade Commission of power here isn’t just false on the facts and the law: It’s another stalling tactic designed to confuse the issue and deter the FCC from fulfilling its public interest mandate under current law.

Title II is the one legal framework that draws a line between Internet content and services on the one hand, and the broadband-access network on the other.  Preserving that line is how we protect free expression and Internet commerce from regulatory creep.

It’s also how we prevent government and corporate interference online (unless by “free” speech you mean “free to say only what Verizon wants you to say”). McDowell’s claim that Title II would subject websites and other tech companies to FCC jurisdiction is just another fundamental misreading of the law and the definitions in the Communications Act.

Net Neutrality opponents like McDowell always come back to this laziest of First Amendment conflations, arguing that if the access network is regulated in any way this equates to regulation of what you and I say over that network.

This was never true for the phone system. And Title II will do nothing to hamper free speech online. In fact, it’s the only approach that actually protects it.

Wrong in the End

Closing with the bizarre image and false claim that our nation's nondiscrimination rules were written for a time “when people held their phones with two hands,” McDowell reveals just how little he thinks of real people.  Perhaps it’s hard for him to grasp the truth when he’s so busy tossing around these ham-handed talking points.

There’s nothing to his claims about Title II hobbling the tech sector or imposing new taxes, but he trots them out no matter how many times they’ve been disproven.

And there’s no reason for the FCC to stand aside, abdicate its responsibility under existing law, and wait for an insincere “solution” from lawmakers who have always attacked the open Internet and the millions of people fighting for it.