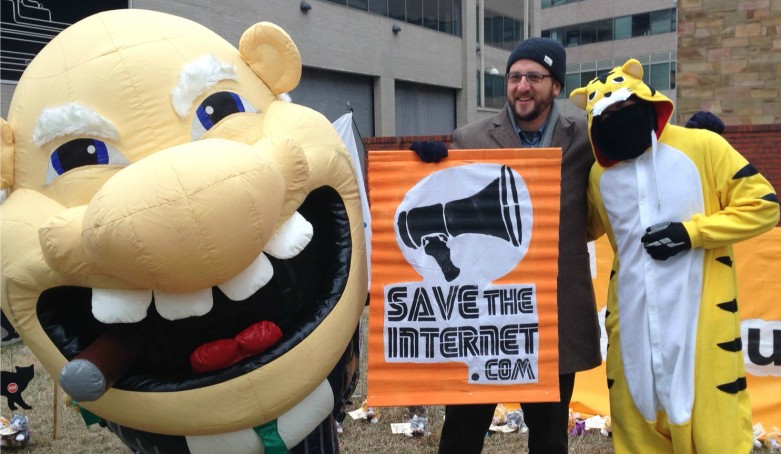 Showdown at the FCC: Net Neutral-i-kitty vs. Cable Boss

January 29, 2015
Net Neutrality
The FCC and Media Policy
Free Press on the Ground

Early Thursday morning, the five FCC commissioners gathered for their first open meeting of 2015. Besides drawing the usual crowd of reporters, the agency was surrounded by a herd of more than 400 cats.

Black-cat silhouette cutouts, cat balloons and stuffed cats crowded the lawn. Within the herd were a bunch of plush kitties that generous Free Press donors sponsored for outings like this (thank you!). Free Press staff handed passerby “Reclassify Now” flyers with a statement of purpose from the cats: “We’re here to MEOW for Title II. Please do strong rules against blocking and discrimination, too. Open and free, the way the Internet should be. It’s up to you, Chairman Wheeler and FCC!”

In addition to rallying for strong Net Neutrality protections, the cats were in D.C. to witness a historic battle between two contenders who symbolized the fight over the fate of the Internet.

On one side was Net Neutral-i-kitty, representing the millions of Internet users who had spoken out for Net Neutrality over the past year. On the other side was Cable Boss, hailing from the self-serving nation of Comcast.

The fight between Net Neutral-i-kitty and Cable Boss kicked off with a chase up and down the sidewalk outside the FCC. Free Press President Craig Aaron provided a play-by-play for observers while Field Director Mary Alice Crim refereed the fight.

Although Cable Boss’ superior size might have given him some advantages, Net Neutral-i-kitty’s strength came from many sources — from people posting cat videos online to protestors rallying in the streets to the millions of people who have weighed in at the FCC.

We can only hope that this fight has foreshadowed events to come, and that the FCC will implement strong Net Neutrality rules by reclassifying broadband providers under Title II. We’re thankful that Chairman Tom Wheeler has signaled his intentions to do just that, and await the outcome of the agency’s Feb. 26 vote on new rules with paws crossed.

Scroll below for video and photos of the battle: