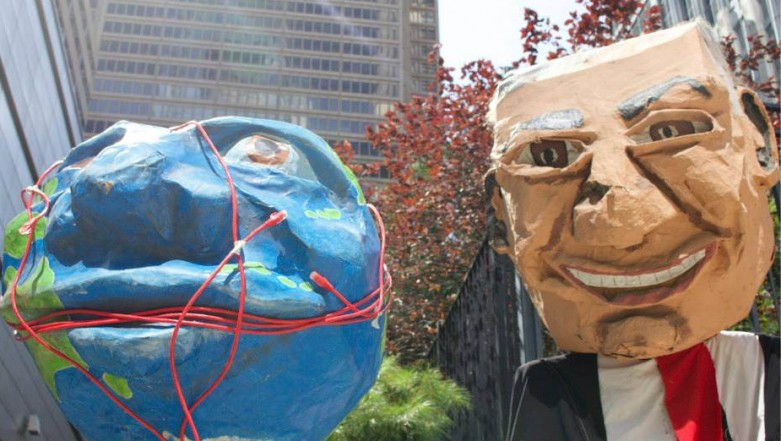 Comcast is constantly claiming that everything it wants to do — like kill Net Neutrality and merge with Time Warner Cable — is good for the public.

Right now Comcast is spinning out lies left and right, hoping you won’t look at any of its claims too closely. We’ve collected 12 of the biggest whoppers here so you’ll know them when you see them.

1. “We believe in Net Neutrality.”

Comcast has been running ads claiming it’s the only company in America bound by “full Net Neutrality” and should therefore be allowed to merge with Time Warner Cable. Sounds fishy, doesn’t it? That’s because it is. The reason we need Net Neutrality rules in the first place is to protect users from gatekeepers like Comcast.

2. “No seriously, we really believe in Net Neutrality!”

Well, for another three years. Whenever Comcast trots out this argument it neglects to mention that it agreed to adhere to open Internet rules only as a condition of its 2011 merger with NBCUniversal — an agreement that expires in 2018. Comcast executives recently said they can’t guarantee the company will still abide by Net Neutrality past this expiration date, and even under these conditions Comcast has already figured out ways to slow down and mess around with Internet traffic. That’s why the version of “Net Neutrality” Comcast supports is the loophole-ridden kind that allows fast lanes. Pssh. More like Not Neutrality.

3. “If the FCC implements Net Neutrality rules, your bill will go up.”

Net Neutrality rules don’t lead to price increases, plain and simple. There’s just no truth at all to the convoluted, trickle-down argument that if we let cable discriminate more they’ll pass the savings along to you. Your bill is already going up. And up. Cable rates have been growing faster than inflation for decades. But that’s because of a lack of competition, not because of consumer-protection rules.

4. “We don’t need Net Neutrality; we’ve never even thought about blocking anyone.”

Here’s a list of the many ways in which Comcast and other Internet service providers have violated Net Neutrality over the years. And let’s not forget that while Comcast and Netflix were enmeshed in a dispute that dragged on for months, Comcast customers experienced slow speeds when they tried to access and use Netflix. As this Consumerist graph shows, speeds reached their lowest right before the deal was announced in February 2014.

Want proof? Right after the FCC voted to approve the merger with NBCUniversal, Comcast hired then-FCC Commissioner Meredith Attwell Baker to work as a top lobbyist.

6. “If you regulate us, we won’t be able to invest in our networks.”

That’s what Comcast tells the media but it’s not what it tells its own investors. In fact, all of the major U.S. ISPs, including Verizon and Time Warner Cable, have told their investors that real Net Neutrality rules wouldn’t affect their investment plans. So why are these companies saying one thing to the media and another to shareholders? Simple: They’re legally bound to tell investors the truth, but they say whatever they feel like in Washington to try and get their way.

“Gosh, I wish my cable provider were even bigger and had more control over what I see and do online. I’d also LOVE to pay higher prices,” said nobody ever. Comcast + Time Warner Cable is the equivalent of Godzilla + Mothra. Except worse. Much worse.

8. “Our merger will bring Internet access to more low-income people.”

Comcast is referring to its Internet Essentials program, a service for low-income families that it created as another condition of its merger with NBCUniversal. Sounds like a good deal, since there are more than 7.2 million low-income families in Comcast’s service areas. But thanks to the restrictive conditions Comcast placed on the program, only 2.5 million families were deemed eligible to participate, and of those, only 300,000 managed to sign up.

To fight the bad press and sweeten the Time Warner Cable deal, Comcast made some changes to improve the eligibility requirements. But no matter how well or how poorly this effort may work, offering affordable prices to people on the wrong side of the digital divide shouldn’t be seen as some kind of special favor Comcast is doing us. In fact, after getting the NBC merger approved, Comcast admitted it was going to do this all along — it just held back on Internet Essentials to use it as a bargaining chip in the merger-approval process.

Groups like the NAACP and the National Urban League (NUL) have come out in support of the merger, citing Comcast’s charitable donations to the community as one of the reasons. If we dig deeper, as this Center for Public Integrity report did, we find that groups like NUL agree with Comcast on a lot of issues. Newer civil rights groups, like Presente.org, oppose the merger because it would give Comcast a near-monopoly over Latino cable-TV subscribers. Just like with the Internet Essentials program, it’s good for Comcast to be charitable, but that’s not a reason to let it kill off competition and abuse its customers.

10. “If you let us merge with Time Warner Cable, your bill will go down.”

Nope. In a rare display of candor, Comcast Executive VP David Cohen told reporters that customers aren’t likely to pay less if this merger goes through. “We're certainly not promising that customer bills are going to go down or even increase less rapidly” as a result of the merger, Cohen said. So what exactly does Comcast mean when it says the merger will produce cost-savings to customers?

11. “We have world-class customer service!”

That must explain why people voted Comcast 2014’s “Worst Company in America.” Just how great is that customer service? Ask Ryan Block, who tried to disconnect his Comcast service in this infamous customer-service-call-from-hell. And be careful if you complain about Comcast: It could get you fired.

12. “Our workers love working for Comcast!”

If by love you mean they enjoy union-busting, lower wages and higher health-care costs ... then SURE! Comcast workers also love being graded on their ability to sell more services to their customers.

Lies, lies, LIES: Comcast just can’t seem to help itself. But you can help regulators see the truth — submit your comment on the merger, and tell the FCC to reject this disastrous deal.