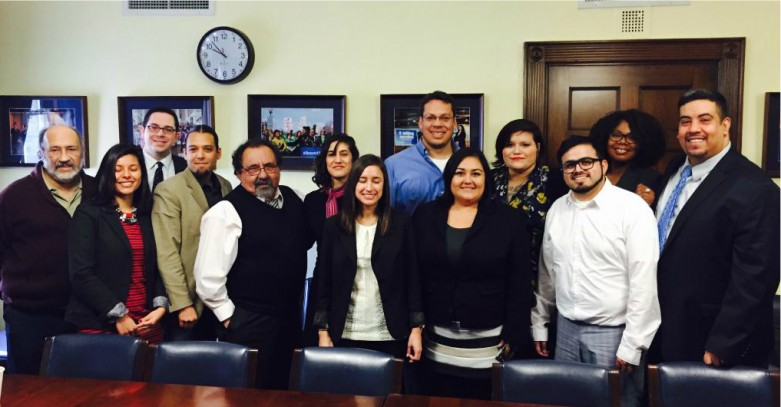 Communities of Color Speak Out for Real Net Neutrality

A few years ago, the conventional wisdom in Washington was that communities of color oppose Net Neutrality.

It wasn’t true then and it sure isn’t true today.

Over the past two months, a number of events have further demonstrated that communities of color support strong open Internet protections.

In January, the Center for Media Justice led a delegation of Black racial justice leaders, including activists from Ferguson and a co-founder of Black Lives Matters, to advocate for Title II in meetings with members of the Congressional Black Caucus (CBC) and the FCC.

And on Feb. 12, the National Hispanic Media Coalition and Presente.org, along with the Center for Media Justice, brought a delegation of racial justice leaders to Washington to meet with Black, Latino and Asian American members of Congress.

The group met with five members of Congress and staff from 12 other members’ offices. The delegation called on these offices to support the FCC’s plan to use its Title II authority to adopt strong and enforceable Net Neutrality rules.

The delegation started off the day meeting with Rep. Raul Grijalva, co-chair of the Congressional Progressive Caucus (CPC). During the meeting, the congressman credited open Internet activists with shifting the political momentum in Congress in support of Net Neutrality and urged the groups to stay engaged.

The National Hispanic Media Coalition and Presente.org co-hosted a lunchtime panel discussion at which delegation members and congressional staffers talked about the importance of Net Neutrality to communities of color. More than 80 people attended.

During the discussion, Rep. Keith Ellison, co-chair of the CPC, stopped by to talk about how essential Net Neutrality is to online free speech and commerce.

“The Internet is a place where people who do not have a seat at the table can amplify their voices,” Ellison said.

Earlier this month, Ellison and Rep. Maxine Waters coauthored a letter that called on the FCC to use Title II to pass Net Neutrality rules for both wireless and wireline services. Thirty House members signed the letter, bringing the total number of CBC members in support of Net Neutrality to 12.

Among the signers was civil rights icon John Lewis, who recently released a statement on Facebook to reiterate his support for strong Net Neutrality rules:

If we had the technology, if we had the Internet during the movement, we could have done more, much more, to bring people together from all around the country, to organize and work together to build the beloved community. That is why it is so important for us to protect the Internet. Every voice matters, and we cannot let the interests of profit silence the voices of those pursuing human dignity.

I had the honor of working with the organizers of both delegations to help set up meetings with key congressional members. All of the organizers are partners with Free Press in the Voices for Internet Freedom coalition.

We look forward to continue working with 18 Million Rising, the Center for Media Justice, ColorOfChange.org, the National Hispanic Media Coalition, Presente.org and other racial justice groups to ensure people of color are heard in Washington.

With more than 100 racial justice and civil rights groups calling on the FCC to reclassify broadband providers under Title II, support for real open Internet protections will only continue to grow.

Scroll below for photos from the Feb. 12 panel discussion: