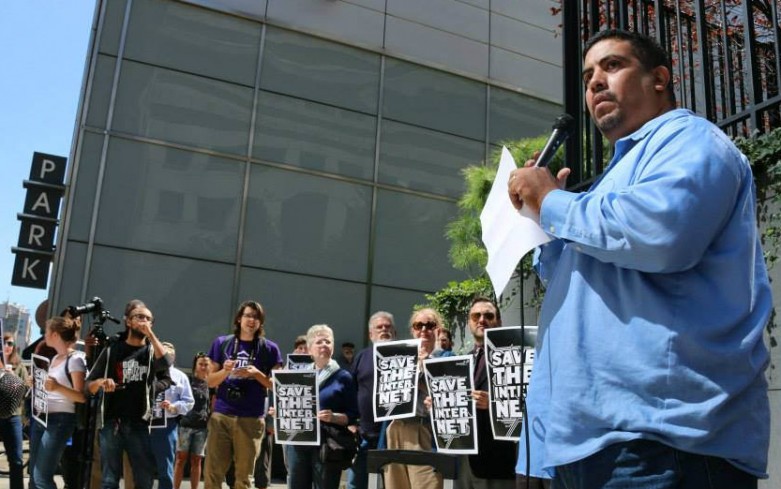 Only Net Neutrality Can Protect the Internet from Becoming Like TV: White, Middle-Class and Exclusive

This piece originally appeared in The Guardian.

The future of the Internet is about to be decided. Will it continue to be a place where dreams are born, dissent is protected, and democracy thrives? That depends on a crucial Net Neutrality vote at the Federal Communications Commission on Feb. 26.

Internet Service Providers want to break the Internet into fast and slow lanes that sell public voice to the highest bidder. If we lose that vote, the most democratic communications platform the world has ever seen could become more like cable TV, a fairly scary place that reproduces the economic gaps and racial hierarchies of the offline world.

A year ago, when a D.C. circuit court struck down the first round of hard-won Net Neutrality rules, the court’s decision charged its proponents with the daunting task of persuading the FCC to reclassify broadband as a common carrier, under Title II of the Communications Act. This would give Net Neutrality rules the legal underpinning needed to be enforceable. Standing in the way was an army of telecom lobbyists, and the millions of dollars spent by the telecom industry to sway congress and a handful of D.C. insider civil rights organizations.

A visionary cohort of civil rights leaders refused to have their positions on network neutrality bought, sponsored, or sold.

Many spoke up. Like Rep. John Lewis, who said, “Every voice matters, and we cannot let the interests of profit silence the voices of those pursuing human dignity”. And the co-founders of Black Lives Matter, whose powerful defense of the internet as a platform for social change reverberated from Capitol Hill to Silicon Valley.

Twenty-first century groups that use the open Internet to fight for fair policing, to end mass deportation, and win fair wages on sites like ColorOfchange.org or Presente.org also raised their voice on this issue, along with their partners in the Media Action Grassroots Network. Their views, once obscured by corporate gatekeepers, can now reach audiences directly, in their own words, at unprecedented speeds. When the openness of the Internet came under attack, these civil rights activists stood up, and fought back.

The Net Neutrality rules proposed by FCC Chairman Tom Wheeler would not only protect those organizing for change, but also help close long-standing equity and wealth gaps that disadvantage communities of color and America’s poor. From ensuring access to quality education and health care, to strengthening opportunity for independent artists and small businesses, equal representation in a digital economy and 21st-century democracy demands Net Neutrality protections.

Despite the clear benefit that Net Neutrality protections offer to underserved communities, Internet service providers like Comcast and Verizon have continued to propagate myths in an effort to thwart the fight for an open Internet. Fortunately for the American people, Net Neutrality remains on the table at the FCC, despite the industry’s best efforts.

This is largely due to the homegrown activism by local leaders rooted in communities that have the most to lose if the FCC votes against net neutrality. From the low-income students in Philadelphia asking Comcast to pay its fair share, to activists of color organizing #DontBlockMyInternet marches in San Antonio, the SF Bay Area, Champaign-Urbana, New York,Albuquerque and more -- underserved Internet users are making it very clear that they want rules that keep the internet a level playing field, and they want them now.

If the rumors are true, it looks like these activists, and the over 4 million people who advocated for strong Net Neutrality rules, might just get the protections they’ve been waiting for.

The open Internet is the first and only mass communications platform to allow under-served communities to bring injustices once in the shadows to light, and speak truth to power.

That’s why if the FCC protects internet users with strong Net Neutrality rules this week, I will be among those clapping and crying for joy. Though the struggle for equal communication rights and access is far from done, an open Internet gives those without traditional power the tools to plead our own cause -- and that is something worth fighting for.