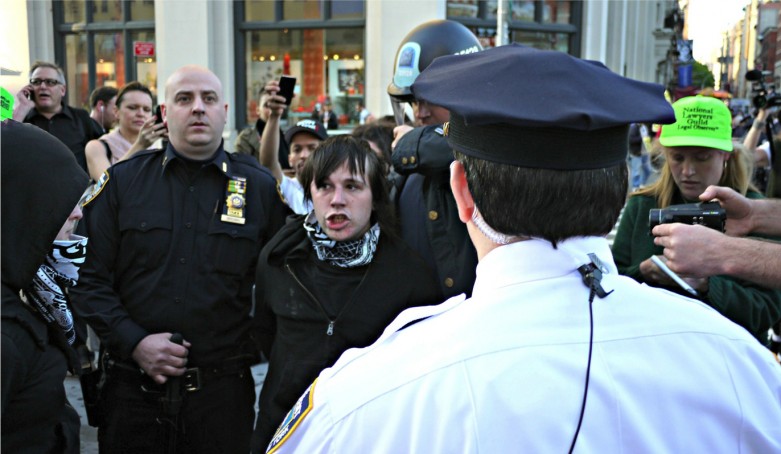 Your Right to Record: Protected by Law, Disrespected by Law Enforcement

While Feidin Santana and Ramsey Orta are hardly household names, these men played pivotal roles in one of the most important civil rights stories of our time.

They made news by using their cellphone cameras to record the police killings of two unarmed black men: Walter Scott and Eric Garner. And though they may not have realized it at the time, such recording is constitutionally protected.

But that may be little comfort to people who record tense encounters between police and the public. After filming the April 4 shooting of Walter Scott, Santana told NBC News “I felt that my life, with this information, might be in danger. I thought about erasing the video and just getting out of the community, you know Charleston, and living some place else.”

Orta, who documented police choking Eric Garner to death on Staten Island, was arrested on an unrelated gun charge the day after the coroner declared Garner’s death a homicide. He was only recently released on bail after a second arrest on a drug charge. After pleading not guilty during a February hearing, Orta told the judge that he was the victim of a “frame-up” as apparent retribution for sharing his Garner video with the media.

Getting the Law Right

The ubiquity of camera-ready smartphones has spawned legions of “citizen journalists” like Santana and Orta. They may not think of themselves as reporters, but they do make news simply by witnessing, recording and sharing newsworthy events. It’s an act that’s become so commonplace that few think twice about recording events as they unfold on the street.

Recording police officers as they go about their duties, however, is a thornier issue.

Less than a month before the video of the Charleston shooting went public, a Texas state legislator introduced a bill that would make it illegal for people to photograph or record within a 25-foot radius of police activity.

Texas Rep. Jason Villalba dropped his bill earlier this week, citing a backlash from “far-left civil libertarians” and “far-right people who believe that we were somehow limiting First Amendment rights.”

Villalba’s confusion about these rights puts him in the unfortunate company of other lawmakers and law enforcement.

In March 2014, the Illinois Supreme Court struck down the Illinois Eavesdropping Law, which had made the recording of police officers without their consent a felony, punishable by four to 15 years in prison. The law, which had led to a number of arrests across the state, had the support of state police and prosecutors.

Earlier this month, a video surfaced on social media of an incident involving Virginia teens pulled over by police for what initially seemed a routine traffic stop. The driver, Courtney Griffith, turned on her video camera as several Virginia Beach police officers pepper-sprayed and Tasered her 17-year-old friend, Brandon Wyne, while he sat in the back seat. Following her arrest, the police confiscated Griffith’s cellphone and deleted the video of the encounter, but she was able to recover the file and share it on social media.

In June 2014, the U.S. Supreme Court unanimously ruled that police cannot search a person’s cellphone without a warrant. Authorities are investigating the Virginia Beach incident but it appears that the police violated both Griffith’s First Amendment right to record and her Fourth Amendment right against unreasonable government searches and seizures.

The ruling builds on earlier efforts from Obama’s Department of Justice. In 2012, the DoJ intervened in a case before the U.S. District Court of Maryland with an unequivocal statement of support for an individual’s “First Amendment right to record police officers in the public discharge of their duties.”

“Officers violate citizens’ Fourth and Fourteenth Amendment rights when they seize and destroy such recordings without warrant or due process,” added the Department’s civil rights attorneys.

The Law vs. Law Enforcement

While the courts and DoJ have been clear about our right to record, that message hasn’t always filtered through to the local level, says photojournalist Carlos Miller, who has spent the past eight years documenting many incidents of police harassment of photographers.

“Until we have stronger disciplinary action against police, officers are not going to shy away from making these sorts of arrests,” Miller said in a phone interview.

A bill being debated this week in the Colorado statehouse could help people in that state. It would fine police officers up to $15,000 for seizing or destroying a person’s camera or interfering with someone trying to film them.

Many police forces are considering plans to equip on-duty officers with body cameras, which would record their every encounter with the public. But Miller remains skeptical. “We cannot depend on the police to protect our rights,” he said. “Citizens will have to be the ones who will police the police — as we’ve seen in South Carolina.”

Miller predicts an increase in arrests over the summer as more people are out on the streets enjoying better weather. Consider the epidemic of police shootings in light of a recent Pew Research Center finding that mobile phone usage among U.S. adults has soared above 90 percent, and it’s likely that videos of police abuse will become even more common.

While the technology has changed, our constitutional rights haven’t. But how do we translate free speech and privacy protections at a time when anyone with a mobile phone has the potential to engage in an act of journalism? We need to ensure that these rights, in this new context, are understood and respected by everyone.

As more bystanders use cellphones to document the police, law enforcement must get behind the law and defend our right to record.