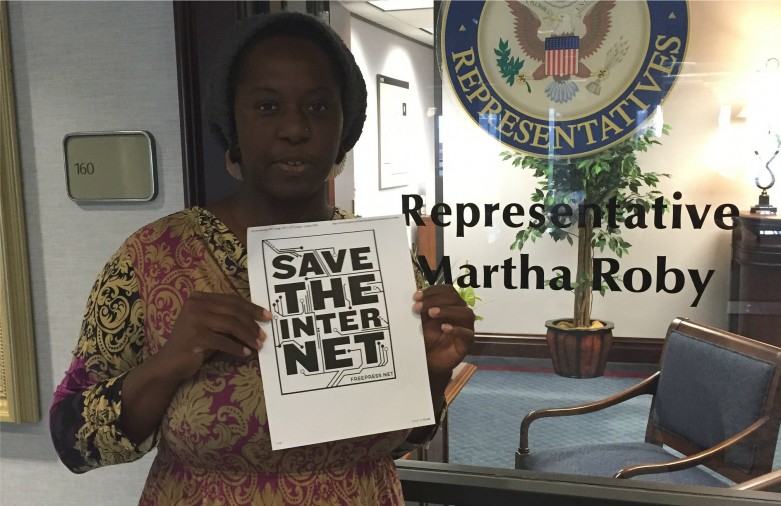 Over the course of my first month as a Free Press intern, I wasn’t sure how often I would be interacting with our members. That all changed during our Net Neutrality Drop-In Day on July 1.

Our members flooded my inbox with photos and reports documenting how their visits with congressional offices had gone. After reading and responding to hundreds of messages, I can say with complete certainty that Free Press members are invested in saving the open Internet.

In June, some members of the House snuck anti-Net Neutrality language into a must-pass government-funding package. This bill — complete with these dangerous provisions — could head to the floor for a full vote as early as next week. In response, more than 1,200 activists from all over the country stopped by their representatives’ local offices last Wednesday to let Congress know how they felt about this latest attack on the Internet.

The reports that came to my inbox were varied. I heard from people who drove many miles to inform their representatives. People wrote in from California, Florida, Maine, Texas and everywhere in between. Most of the people who followed up with us felt they had made a difference and had convinced at least the staffers they spoke to of the importance of Net Neutrality.

One of my favorite stories came from an activist in Alabama. Not only did she visit her local office in Montgomery, she also called Rep. Martha Roby’s other in-state offices in Andalusia and Dothan and reached out to her staff in Washington, D.C. As I read through the list of everything she’d done that day to help protect the Internet I couldn’t help but feel inspired by her initiative and level of commitment.

A Free Press member from Alaska made the best of a 55-mile trip to Anchorage and stopped by Rep. Don Young’s office. And as a proud Vermonter I was excited to hear from a member who visited Rep. Peter Welch’s office in Burlington. Although Rep. Welch is a known supporter of Net Neutrality, it’s always important to let your elected officials know when you think they’re doing a good job.

We also heard from people of all ages and walks of life, including a number of activists in their 80s and 90s. One person even thanked us for “getting his old butt moving.”

Griping about the lack of responsiveness from our federal legislators is an American pastime — right up there with baseball. However, there are ways to get our elected officials to listen to us. And by far the most effective way to get legislators’ attention is to visit their offices.

Free Press will be coordinating more formal in-district meetings during the upcoming congressional recess in August. I can’t wait to hear more of your stories!

Here are just a few of the activists who made our drop-in day a success: