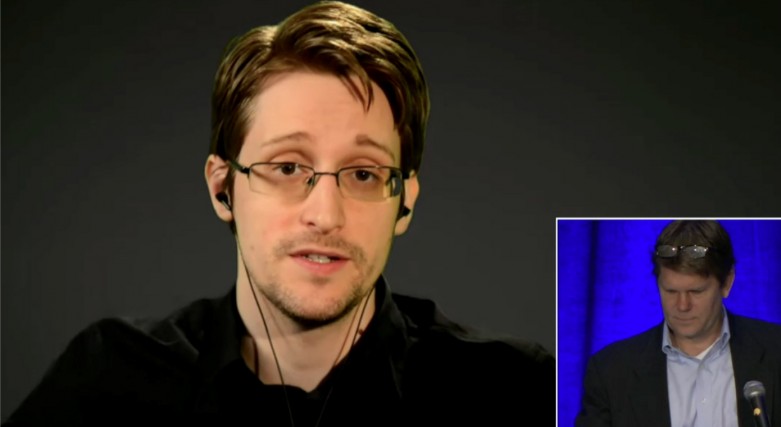 You don’t often get the chance to see two government whistleblowers discuss the future of U.S. surveillance policy.

But that’s what happened when Edward Snowden called in to an interview with FBI whistleblower Mike German at last week’s Computers, Freedom and Privacy Conference (CFP). Their probing conversation about the chilling effects of government surveillance programs set the tone for two packed days of eye-opening speakers, panels and debate.

This year’s CFP (co-chaired by Free Press’ own Sandra Fulton) focused on the myriad benefits and threats of developing technologies, as well as the policy tensions they create. In essence, the conference posed this question: How do we shape a technological future that promotes innovation and free speech while also protecting against dangers like privacy invasion and the surveillance of marginalized communities?

With so many issues to navigate, the path forward is a complicated one. A panel on Stingrays examined the muddy legal waters in which these cell-site simulators operate; panelists discussed what policies would ensure constitutional protection against unlawful searches and seizures. Representatives from both right- and left-leaning groups discussed the implications of the USA Freedom Act. While most agreed the legislation was a step toward unraveling invasive government surveillance, panelists disagreed about the strength of the bill, as well as where to go from here.

Another panel focused on “information sharing” legislation, including the recent cyber-surveillance bill CISA. Government and industry representatives spoke about the value of sharing private-sector information with government agencies, but activists including Daniel Kahn Gillmor of the American Civil Liberties Union argued that relevant information is already easily shared, and that legislation like CISA does nothing more than relieve companies of their responsibility to keep consumer data safe.

A critical theme ran through many of the panels: the outsized impact of invasive technologies on communities of color. Panels on body-worn cameras and predictive policing raised questions about how supposedly “race-neutral” technologies can reproduce offline biases and perpetuate injustice. One panel focused on how race and technology interact, examining whether Internet innovations are tools for liberation or oppression in communities of color. As Anika Navaroli of the Data & Society Research Institute put it, “Technology is not the problem; it’s how the technology is being used.”

Malkia Cyril, the executive director at the Center for Media Justice, drove this issue home in an electrifying keynote. She detailed the history of surveillance of communities of color, a history that too often goes unacknowledged.

“People like me have always been watched,” Cyril said. “The only difference is the tool, and the time.” She urged attendees to think about communities that are excluded from critical technology debates, despite being affected by their outcomes.

Free Press President and CEO Craig Aaron took the stage to highlight the need to translate the populist energy of the Net Neutrality fight and other victories into lasting political power. He talked about the rise of the Internet voter: a growing constituency that cares about Internet access, online privacy and a host of other issues. “How do we make dramatic changes?” he asked the audience. “How do we keep the Internet dream alive? We have to organize.”

Technology can create opportunities, but it can also be used to restrict and control. Ensuring freedom for all requires careful policy choices, and these choices require in-depth conversations like those at CFP.

Didn’t make it to the conference? Check out videos of the speakers and panel discussions here.