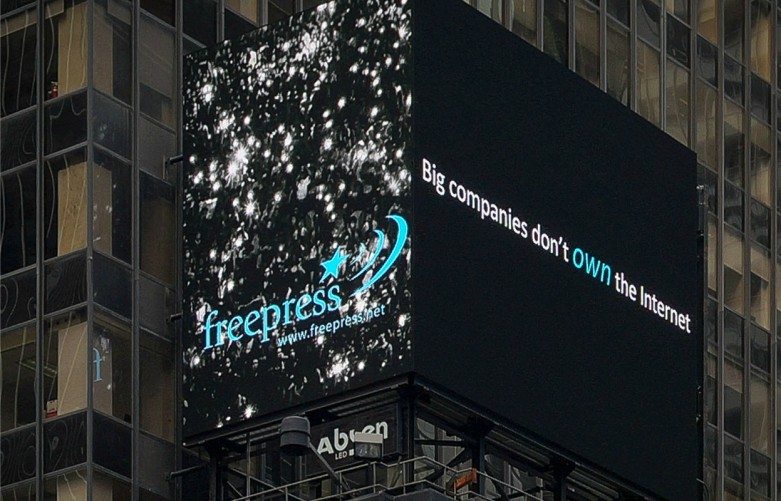 While not every fight ended in a win for Internet users, 2015 was a year when millions of advocates defied the conventional wisdom that tech policymaking was an arcane and secretive world limited to a small circle of insiders.

We organized online and off, sending millions of comments in support of an open Internet, beating back efforts to build even larger broadband monopolies, and creating new online tools to safeguard the privacy of our online communications.

Here are the many highlights ... and a few less-than-spectacular moments:

1. Neutrality: We, the Internet, Won

After more than 10 years of popular organizing, the FCC approved real Net Neutrality protections with a ruling that prevents Internet access providers like AT&T, Comcast and Verizon from becoming the gatekeepers to everything online.

The Feb. 26 vote put control over the Internet where it belongs: in the hands of the people who use it every day and in every way. The agency now has the authority to treat providers as "common carriers" for all content, meaning they must connect Internet users to the places we want to go, not where they'd rather send us.

The phone and cable companies have been fighting to re-engineer the Internet so it favors their bottom line at everyone else's expense. Initially, the FCC attempted to strike a corporate compromise; this opened a massive loophole through which carriers could pick online favorites. This approach was loudly rejected by Net Neutrality supporters before the agency and President Obama chose common carriage. The resulting vote was the biggest win for the public interest in the agency's history. And it was the culmination of a decade of dedicated grassroots and netroots organizing and advocacy, as millions came to the defense of the open Internet to tell Washington, in no uncertain terms, that the Internet belongs to all of us.

But nothing in Washington is final. Since February, the cable and telecom monopolies and their lobbyists and lawyers have repeatedly tried to snatch away this victory from Internet users. They pushed their sycophants in Congress to insert anti-Net Neutrality language into must-pass legislation — but the Internet rose up again, driving thousands of calls to Capitol Hill until the dangerous riders were dropped.

They've also challenged the FCC's authority in court, again mounting outlandish claims about having a right to edit the Internet. A ruling is expected in early 2016. The FCC — and Net Neutrality — should prevail, but don't expect this to be the last word from die-hard haters of a user-powered Internet.

In April, Comcast abandoned its proposed mega-merger with Time Warner Cable. The merger's demise came as a surprise to many D.C. insiders who had assumed it a done deal in a town where Comcast's political arm reaches into the pockets of so many elected officials. The cable giant had also spent millions on a "truthy" advertising campaign extolling the many virtues of a bigger Comcast.

But for millions of unhappy and poorly served Comcast customers the merger was bad news from the beginning. The FCC and Justice Department got the message that the public doesn't want huge gatekeepers controlling their communications. Comcast's failed bid to control Time Warner Cable should be a lesson for a merger-happy industry.

Rather than building bigger monopolies, communications giants should focus on actually serving their customers and competing to provide the fast, affordable and open Internet services that Americans want. Wishful thinking, perhaps, as Charter Communications and Time Warner Cable announced plans for their own merger not long after Comcast scuttled its deal.

Also in February, the FCC ruled to preempt state laws that prevent municipalities from creating high-speed Internet networks to connect their residents. The ruling, in response to petitions brought before the agency by cities in North Carolina and Tennessee, should serve as a precedent for municipalities in other states facing phone- and cable-company efforts to stop homegrown networks. Nearly 20 states have laws on the books that severely limit community-based efforts to provide Internet access.

The FCC stood up to industry efforts to legislate away competition in favor of dozens of communities seeking to provide essential broadband services where people have few to no other options. This monopoly-minded push against local competition is typical of a phone and cable lobby that will do anything to consolidate control over access to communications. The FCC understood that it's in the best interests of Internet users, communities and local economies to have many affordable and high-quality options for getting online.

4. Philly (and Seattle) vs. Comcast: New Hope for Cities

In early December, Philadelphia hammered together a cable-franchise agreement with Comcast that will provide low-cost Internet service to thousands more Philadelphians. With franchise agreements, cities give a cable company an all-powerful local monopoly. But they get to ask for benefits in exchange. Responding to demands from local advocates, Philadelphia forced Comcast to own up to its responsibility to connect many living in the shadow of its corporate headquarters who still can't afford the spiraling cost of broadband.

After eight months of negotiations the city council's public property committee set a high bar for approval. And Comcast gave in: providing career opportunities for public school tech education graduates, living wages for Comcast employees and subcontractors who work in the city, and an expansion of the discounted Internet Essentials service to include seniors, the disabled and low-income adults.

And this last point is important. More cities are waking up to the idea that local cable franchise agreements represent an opportunity to expand Internet access into the neediest communities. "This will be a precedent-setting deal," Hannah Sassaman of Philadelphia's Media Mobilizing Project told local media. And indeed, Seattle wrung similar benefits from Comcast after learning about the deal struck in Philadelphia.

At the close of 2014, FCC Chairman Tom Wheeler recognized that competitive choices for fast, wired-line connections are lacking in America. "The exercise of uncontrolled last-mile power is not in the public interest," he told an audience of tech entrepreneurs in Washington. "This has not changed as a result of new technology." The absence of choice has driven costs for broadband beyond the reach of many in lower-income communities.

A new Pew Research Center report shows that in the past two years, the percentage of adults with wired-line broadband at home has declined from 70 percent to 67 percent. Those declines were more pronounced among marginalized groups, including African Americans, rural residents and low-income families. This drop in connectivity is happening amid nearly unanimous political support for the importance of universal high-speed access.

In 2015, Wheeler's FCC recognized that one of the programs designed to address the connectivity gap is in need of a "reboot." In May, Wheeler invited comments on ways to make Lifeline — a program set up originally to subsidize the cost of telephone services — available for broadband Internet connections as well. Since then advocates have been urging the FCC to support more affordable access for everyone. While Lifeline's new broadband focus is one tool, the agency needs to take a comprehensive approach to addressing the lack of choices that has pushed costs for services way beyond the reach of too many.

Any roundup of Internet advocacy in 2015 would be incomplete without recognizing the spreading gatekeeper powers of social networks — and the growing public advocacy to support the rights of users of platforms like Facebook, Twitter and YouTube. Facebook alone counts more than 1.5 billion subscribers. In many ways, it and other privately owned platforms have become our public square. But they often lack transparency and accountability when their staffers make decisions to censor users or filter their access to the open Internet.

On a global scale, these companies seem far too eager to placate free-speech hating regimes. While companies like YouTube and Twitter have made some efforts to defend their users, they tend too often to side with the governments of countries (like Turkey and Russia) with deplorable track records.

In 2015, Internet advocates created a number of initiatives to track online censorship and protect the rights of social media users.

Many also joined in protest of a Facebook scheme to control the gateway to the online world. The company unveiled a program, initially called Internet.org, which offered poorer communities a discounted but limited glimpse of the Internet. Facebook quickly rebranded the effort after millions in countries including India, Brazil and Indonesia rejected the idea.

In their view Internet.org offered an third-class version of the online world — in defiance of the principles of inclusion and openness that are the network's DNA. It’s an outcry that, for the moment, is being heard.

7. The Surveillance State Strikes Back

The battle to rein in online surveillance raged back and forth in 2015 with important advances for privacy advocates offset by a disappointing year-end defeat.

In June, President Obama signed the USA Freedom Act into law. USA Freedom marked the first time the government has reined in NSA operations since before the 9/11 attacks. The new law scales back mass collection of metadata and shines much-needed light on the proceedings of the secretive Foreign Intelligence Surveillance Court that oversees much of the NSA's intelligence operation. It also mandates new transparency requirements for government surveillance activities, including allowing companies to report the requests they receive to hand customers' personal information to government agencies.

Left untouched, however, were Section 702 of the Foreign Intelligence Surveillance Amendments Act and Executive Order 12333, often used to justify collecting data on our phone calls, emails and other Internet speech.

Privacy champions scored a win at the White House in October, after gathering more than 100,000 signatures on a petition urging President Obama to oppose an intelligence agency plan to pry open "backdoors" to encrypted communications. A subsequent meeting between encryption advocates and the White House was inconclusive yet hopeful.

The year closed with a major setback, though, when surveillance hawks in Congress snuck the language of the Cybersecurity Information Sharing Act into a must-pass spending bill. CISA is yet another invasive surveillance measure, offering Internet companies and broadband carriers legal immunity for monitoring users and sharing our personal data with authorities.

As 2016 presidential hopefuls took to the trail in 2015, Internet issues found a spot at the podium. During the fifth and final GOP debate of the year, candidates discussed Internet freedom with a passion unheard in previous election cycles. The problem is that most all of them got everything wrong, advocating for dangerous Internet controls to combat the threat of terrorism. Democrats have also taken up the issue, with similar failings.

Along the campaign trail, candidates fielded questions from advocates about Internet access, privacy, choice and openness. This seems only natural. Tens of millions of people from across the political spectrum have demonstrated their support for public interest-driven Internet policies.

Our politically engaged Internet community is now a force to be reckoned with. It's one that will no longer sit quietly by as politicians and lobbyists attempt to take away our rights to connect and communicate. As this community of advocates and activists grows, politicians should take notice and follow our lead.