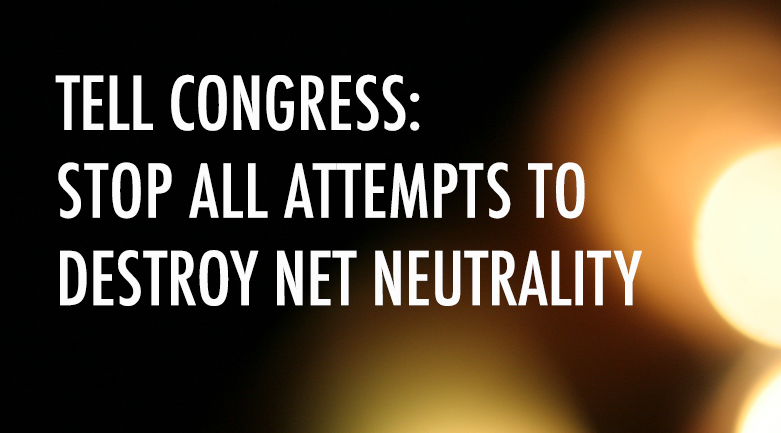 A Gift to Corporations

Congress is back at it: Up for consideration in the Senate is a dangerous, sweeping package of deregulatory bills that threaten some of our most crucial government protections — including Net Neutrality.

Who wins if this deal goes through? Big business — including the monopoly cable companies that fought tooth and nail against real safeguards for the open Internet.

Who loses? Everyone else.

While each bill in the package is harmful on its own, together the bills would paralyze the regulatory process and rig the system in favor of corporations. Any new consumer protections would become even harder to implement: Congress would be allowed to intervene in the rulemaking process of independent federal agencies — like the FCC — and throw a wrench in the works if special interests complained.

This package also threatens existing rules safeguarding the environment, ensuring Wall Street oversight and protecting Net Neutrality. Republicans in Congress have been looking for any excuse to throw out the public’s hard-won open Internet protections, and if these bills move forward, Net Neutrality will likely be one of the first rules on the chopping block.

But this isn’t a partisan issue — lawmakers on both sides of the aisle are supporting these destructive bills, and we need to tell them enough is enough. Millions of Americans fought for Net Neutrality, and we can’t let Congress strip away these crucial public interest protections.

This legislative package is nothing more than a gift to corporations trying to dodge consumer safeguards. But the price of this gift is far too high: We simply can’t afford to lose the open Internet. Tell Congress to leave Net Neutrality alone.