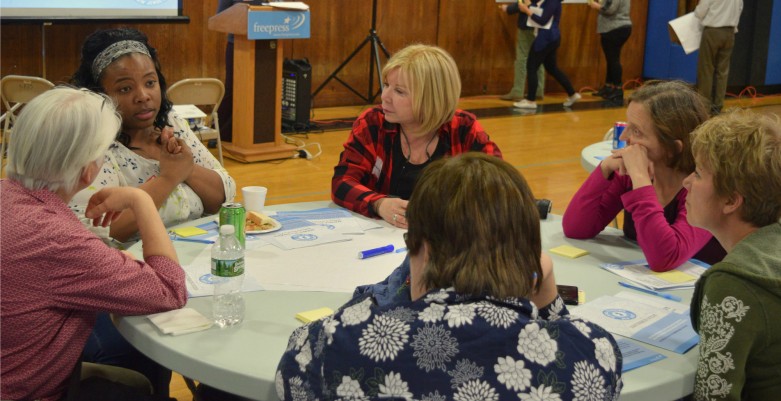 The Journalism a Changing Morristown Needs

On June 1, we’ll host a free public forum that will explore ways in which community members and local reporters can work together to strengthen Morristown. Business owners, students, faith leaders, activists and other residents will join journalists at the Neighborhood House, a nonprofit agency that provides after-school programs and other support services. All are invited to take part in this community-building event.

News Voices: New Jersey is helping to build deep relationships between newsrooms and communities across the state in ways that benefit both groups. Through this work, residents take a more active role in local journalism and better support newsrooms. And newsrooms produce better journalism when they listen to the concerns of everyday people and incorporate these perspectives in their reporting.

As more meaningful stories get told and people feel more connected and invested in their local media, our communities grow stronger.

We’re especially excited to bring News Voices to Morristown because it’s the hometown of the Geraldine R. Dodge Foundation, a philanthropic organization that works on issues critical to New Jersey residents. Dodge is a major financial supporter of News Voices and is helping develop a network of journalism and community projects — all of which have helped News Voices succeed.

The June 1 event comes at a critical juncture for Morristown.

People who live in Morristown love its small-town feel and rich history and take pride in its diversity. But we’ve heard concerns from residents that ongoing and planned development will significantly change the makeup of the town. Those who are already on the margins are worried that they will be left behind or pushed out of the community.

More than a third of Morristown residents are Hispanic or Latino, one-third are foreign-born and approximately 14 percent are African American, making the town more diverse than New Jersey as a whole and significantly more than the surrounding areas. Tensions that flared in previous years between Latino newcomers and the rest of the community have calmed, but Latinos in Morristown remain geographically and culturally separated and lack political representation in local government.

One of the most significant challenges facing Morristown is the lack of affordable housing. Only 39 percent of the city’s housing units are owner-occupied, and the median rent of nearly $1,500 per month is 25 percent higher than the state average. And the average rent is likely to go up, thanks to the luxury condos being built in the predominantly Latino neighborhood of Speedwell.

Many residents have said that the things that make Morristown special and unique will be lost if the town tries to become trendier, pricier and, in the words of a few individuals, “Hoboken West.”

Lack of affordable housing leaves people financially vulnerable in every aspect of their lives. We’ve learned through our conversations that two-thirds of the guests at Morristown’s Community Soup Kitchen aren’t homeless, but don’t earn enough money to cover the cost of food.

Local journalists have a crucial role to play in raising awareness about how these changes affect the community’s most vulnerable residents, and in asking questions about how development is impacting Morristown as a whole.

For a town of three square miles and 18,000 residents, Morristown has a substantial number of media outlets. One of those is Morristown Green, an independent hyperlocal news site run by longtime resident Kevin Coughlin. Area newspapers like The Daily Record and Star-Ledger also cover the community. Many of these outlets provide consistent coverage of events and inform readers about local government and local arts and culture.

Yet the downturn in print journalism has reduced the number of local reporters doing enterprise and accountability journalism. And Morristown’s Spanish speakers — one third of its population — have few sources to turn to for local news.

Civic engagement is part of Morristown’s culture, and people here are participating in an important discussion about how the community is changing. The goal of News Voices is to bring those perspectives into local news coverage. It’s especially important for journalists and those who are active in civic affairs to hear from those who are struggling.

Every member of the Morristown community has a stake in its future, and journalists can help ensure that all voices are heard and that the public has the information it needs to make educated decisions. Local media can advocate for the public interest by uncovering truth, pressing for transparency and holding the powerful accountable.

At the June 1 forum, community members and local media will discuss important issues in small groups, and together they’ll brainstorm story ideas and collaborate on ways to give every resident a voice in Morristown’s future.

We’ve seen firsthand how these types of community-engagement events set the stage for lasting change.

Our first forum, held in New Brunswick last November, engaged more than 120 attendees in a brainstorming session about underreported local issues. The second, held in Atlantic City last December, featured a rich discussion about the ways in which local journalism can help revitalize the city.  And the News Voices gathering held in Asbury Park in March brought together residents from opposite sides of the community to explore ways in which journalism can help unite the city.

In each of these communities, the groundwork has been laid for future projects and collaborations between local reporters and residents.

We’re hoping that the June 1 event will help identify how Morristown can grow as a unified community where everyone benefits and all residents are part of the conversation.

This is your chance to make your voice heard. Join us at the Neighborhood House on June 1 at 6 p.m. All are encouraged to participate.

Click here for more information about the event and to RSVP.