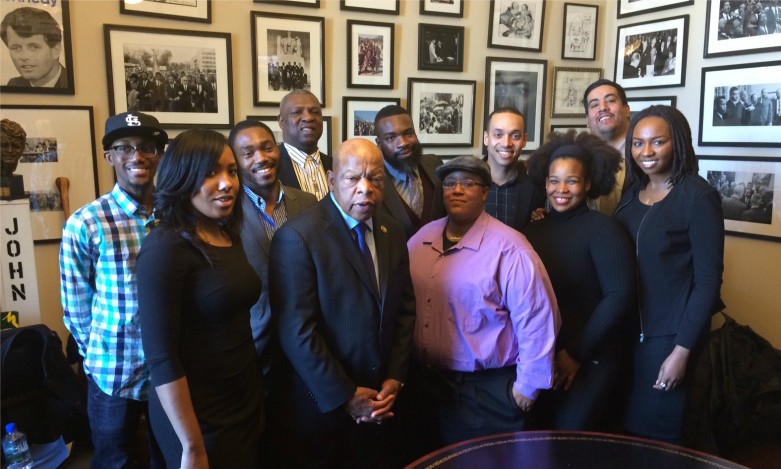 This piece originally appeared on All Digitocracy.

It’s difficult for communities of color to fight for racial justice if we’re unable to speak for ourselves.

White media owners have always controlled our nation’s media system — putting forth a racial narrative that criminalizes people of color and supports the goals of white supremacy. This narrative has been present since the first colonial newspapers were published — and it continues in the images we see on our TVs and computer screens today.

This is why last month’s federal appeals court ruling upholding the Federal Communications Commission’s Net Neutrality rules is such a critical victory for communities of color, who are trying to interrupt that message.

On June 14, the court upheld the nondiscrimination rules the FCC passed in 2015 that require broadband providers like AT&T, Comcast and Verizon to treat web traffic equally. The FCC also voted to regulate broadband providers as common carriers under Title II of the Communications Act, giving the agency strong legal authority to enforce its protections.

The court, meanwhile, rejected the arguments from the big broadband providers, which claimed the FCC had no such authority. Through the years, these powerful companies have spent millions lobbying the FCC to adopt rules that would allow them to discriminate, interfere with and censor web traffic.

But the court decision protects the open internet from these kinds of predatory practices — giving communities of color the opportunity to use online platforms to tell our own stories.

Even though people of color make up close to 40 percent of the U.S. population, we own just 3 percent of our nation’s full-power TV stations, 7 percent of full-power radio stations and just a handful of cable networks. We live in a de-facto media apartheid system that disenfranchises people of color — preventing us from taking part in or having any significant control over the construction and distribution of our own narratives.

Corporate media gatekeepers perpetuate this structural and institutional racism in their news coverage and entertainment programming, portraying people of color as threats to society.

This is why open communications platforms must be protected: The internet enables people of color to challenge the prevailing narrative and prevent our voices from being ignored.

The Net Neutrality decision was issued just two days after the massacre at the Pulse nightclub in Orlando. The decision reinforced to Malkia Cyril, the executive director of the Center for Media Justice, why protecting the open internet is so critical for people of color. She commented:

Those who lost their lives at the Pulse nightclub shooting in Orlando, most of whom were Black and Latino, are 49 of the many reasons we celebrate the court’s decision … to keep the internet open. In moments like these, the dead need the living to speak for them. With a truly open internet, we can hear the voices of those who lost loved ones, organize vigils nationwide to honor their passing, oppose the hateful rhetoric that compromises democracy, and organize to prevent this from ever happening again. Today is a celebration of those whose voices have for too long gone unheard.

The police killings of two Black men last week — Alton Sterling in Baton Rogue, Louisiana, and Philando Castile in Falcon Heights, Minnesota — mean the living are once again using the open internet to speak for the dead.

In Baton Rogue, community members captured on video the police shooting of Sterling as two officers pinned him to the ground. A day later, in Falcon Heights, Diamond Reynolds bravely livestreamed her interaction with the police — while her four-year old daughter sat in the back seat — after an officer shot dead her boyfriend, Philandro Castile, following a traffic stop.

In both cases, witnesses used their cellphones to record police violence. The videos went viral online, pushing back against a mainstream media narrative that’s too quick to criminalize victims.

In 2015, more than 100 civil rights and racial justice groups, including the Center for Media Justice, ColorOfChange, the National Hispanic Media Coalition and 18 Million Rising partnered in coalition with organizations like the one I work for — Free Press — urged the FCC to pass strong and enforceable Net Neutrality rules. One of the major motivations for our activism was the recognition of how much we need the open internet to counteract racism in the media.

As Patrisse Cullors, co-creator of Black Lives Matter, wrote in late 2014: “It is because of Net Neutrality rules that the internet is the only communication channel left where Black voices can speak and be heard, produce and consume, on our own terms.”

And as civil rights icon Rep. John Lewis stated in his support for Net Neutrality:

If we had the technology, if we had the internet during the movement, we could have done more, much more, to bring people together from all around the country, to organize and work together to build the beloved community. That is why it is so important for us to protect the internet. Every voice matters, and we cannot let the interests of profit silence the voices of those pursuing human dignity.

But despite the historic court ruling safeguarding the Net Neutrality rules, the fight to protect the open internet is far from over. The struggle continues to ensure the internet remains an open platform for dissident voices as we fight to put forward a narrative that empowers us.

Net Neutrality won in court, but big broadband companies and their Republican allies in Congress are still trying to pass legislation to take it away.

And we know that the same tools that empower movements are used to try to divide and diminish them — through coordinated attacks on those who speak out against injustice, through surveillance of activists and tracking of their social media activities, through misinformation campaigns about what groups like #BlackLivesMatter actually stand for.

That’s why we need to keep fighting to ensure dissident and movement voices can be heard on the internet. Victory on Net Neutrality matters only if it leads to a new narrative and much bigger victories in the struggle for racial justice.