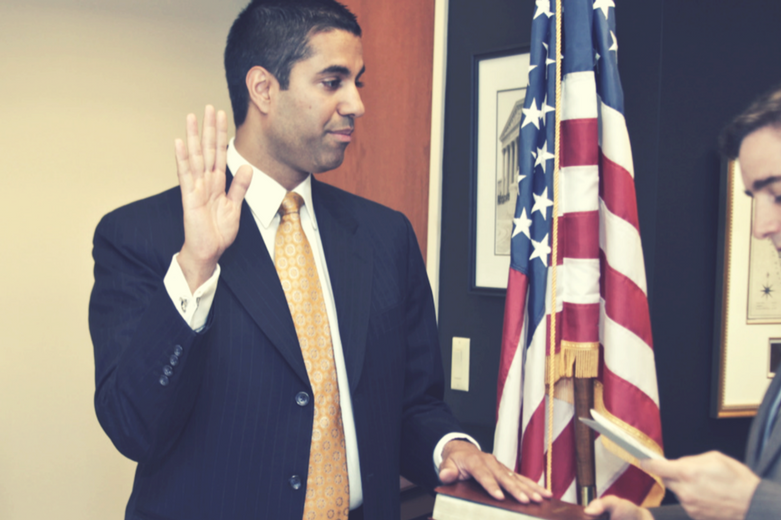 New FCC Chairman Ajit Pai Is Off to an Orwellian Start

Pai bypassed the democratic process, using “delegated authority” to deprive the full Commission of a vote (something he’s repeatedly railed against other chairs for doing), and shoving all these orders out the door on a Friday afternoon.

Unfortunately for Pai, we’re committed to holding him accountable every day of the week.

Here are the actions Trump’s new chairman tried to sneak under the radar:

1. Closed the FCC’s inquiry into zero-rating programs. Zero-rating is a term used to describe a broad range of practices ISPs use to exempt some internet content from arbitrary data caps. Sometimes ISPs ask companies to overcome certain technical hurdles (as with T-Mobile’s Binge On), or charge companies a fee to have their content exempted (as with AT&T’s and Verizon’s sponsored-data programs).

Last winter, the FCC responded to the concerns that public interest groups raised by opening an inquiry into the impact these programs have on competition, affordability and the open internet. In particular, the FCC raised questions about AT&T’s program: The Commission determined that AT&T zero-rates its DirecTV content for free while charging other companies unprofitable rates for the same treatment.

Pai’s decision to shut down this inquiry is pure politics. He’s shielding big ISPs from perfectly reasonable questions and signaling to industry players that he has no intention of enforcing the open internet rules.

2. Stopped nine companies from providing discounted broadband to low-income families. Last March, the FCC voted to modernize the Lifeline program, expanding it to offer subsidies for broadband to families with low incomes who might not otherwise be able to afford a connection. Free Press research has shown that the lack of affordable internet options is a primary barrier keeping low-income families on the wrong side of the digital divide.

Instead of supporting this valuable program, Pai rescinded FCC designations from nine companies that would have allowed them to offer Lifeline-discounted broadband service. These nine ISPs represent a wide range of carriers, including small companies that focus on connecting schools, low-income housing developments and people on tribal lands.

By gumming up the works, Pai is blocking poor families from using Lifeline to access the internet. He’d rather funnel that money into tax breaks for monopoly ISPs.

Some observers speculate that Pai’s action could be the first step in a plan to hamper or outright abandon the entire Lifeline program.

3. Killed the FCC’s guidance to broadcasters regarding shared service agreements and consolidation. Eliminating the agency’s guidance on broadcasters seeking to sell or share stations opens the door to even more media consolidation. Instead of working to close loopholes, Pai’s given broadcasters a green light to skirt the FCC’s broadcast-ownership rules through the use of shell companies and sketchy sharing agreements. Now the same company can run two or more stations, in violation of these ownership laws, as long as the owners disguise the ways in which they’re controlling multiple stations in the same city.

4. Killed a fledgling FCC inquiry regarding flexible spectrum use. Shutting down this preliminary proceeding could be an indication of Pai’s leanings on next-generation wireless deployment. He may transition to giving valuable spectrum for 5G services to the mobile-carrier duopoly, AT&T and Verizon, rather than letting other providers and new entrants explore beneficial spectrum-sharing options like Wi-Fi.

5. Rescinded a report on improving the nation’s digital infrastructure. Pai’s decision to stifle the Office of Science and Technology Policy’s report analyzing digital infrastructure is positively Orwellian: Nothing in the report was controversial, or even legally binding. Pulling the report doesn’t change any FCC policy — but it buries useful information.

Like other members of the Trump administration, Pai is simply trying to cover up facts that he doesn’t like.

6. Rescinded a progress report on E-rate program modernization. Like the infrastructure report, the E-rate progress report is anything but controversial. It makes no substantive policy recommendation besides setting a goal to make E-rate — the Schools and Libraries Program of the Universal Service Fund — more cost effective.

7. Set aside two orders for violations of political-file rules. This move makes it harder for the FCC to take enforcement action against broadcasters that violate the agency’s political-advertising disclosure rules, which make such companies collect and report information on who’s paying for the political ads they air.

8. Set aside a white paper from the FCC’s Homeland Security Bureau addressing cybersecurity risk reduction. Once again, Pai is willfully ignoring reports and analyses that don’t bolster his preferred agenda of scaling back the FCC’s congressionally granted power. Whatever the wisdom of FCC rules on cybersecurity may be — and Free Press has opposed its share of bad cybersecurity bills — it’s disturbing to see the possibility of careful study and analysis taken off the table before final decisions are made.

9. Withdrew requirement that noncommercial stations file ownership-diversity data. In a complicated, confusing media landscape, the last thing the public wants is less information about who owns or uses our airwaves. Diverse ownership is a critical part of building a fair, democratic media system, and Pai’s decision could make it harder for people to assess who’s calling the shots at their local public broadcast stations.

After promising increased transparency at the FCC, Pai quickly and aggressively betrayed his own pledge. He instead chose the Trump administration’s preferred method of policymaking: very bad, very fast and with zero public input.

We need to oppose these efforts to dump our communication rights in the trash. Urge Pai to reverse these damaging decisions at once.