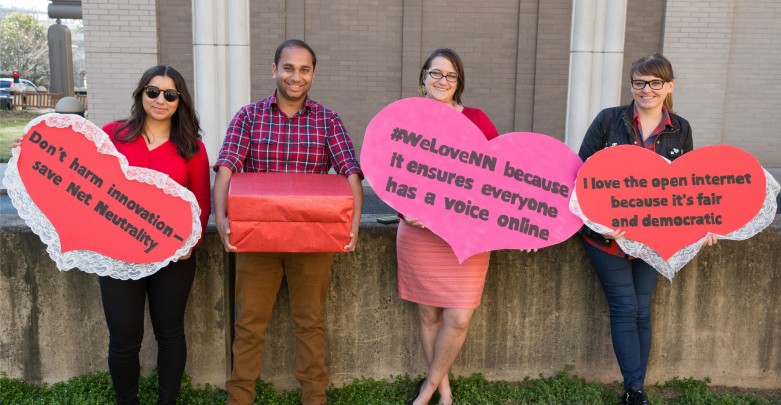 On Valentine’s Day, tens of thousands of Free Press members sent out love letters to the open internet that described why they need Net Neutrality. Today we delivered these messages to the FCC —  including these two:

“I love the open internet because it’s fair and democratic.” — Diane, Sequim, Washington

We joined with allies to deliver nearly 200,000 petitions altogether. There's a real need for actions like this: Trump’s new FCC chairman, Ajit Pai — a former Verizon lawyer — has long opposed Net Neutrality. In fact, after Trump was elected, Pai vowed to take a “weed whacker” to the Net Neutrality rules once the new administration took office.

During his first days at the helm of the agency, Pai showed he’s still on Verizon’s side: He’s making it harder for people with low incomes to get online at affordable rates. He’s made the way internet service providers operate less transparent. And the FCC's historic 2015 Open Internet Order — which millions of people worked so hard to secure — is in danger.

When we arrived at the FCC this morning, we were met with resistance from the Department of Homeland Security’s Federal Protective Services. Both DHS and private security were adamant that we couldn’t protest on FCC property — turning everyone with a sign back to a grassy area across an alley from the building. In addition to taking personal information from two of us who entered the FCC to deliver our comments, private security leafed through all of our documents and then had us X-ray those same boxes of paper.

Despite this reception, we managed to deliver our petitions and comments gathered by allies including the Center for Media Justice, Color Of Change, Daily Kos, Demand Progress, Fight for the Future, the Nation and Open Media. Our friends from Future of Music Coalition and Free Software Foundation joined in the delivery.

Thanks to all of our members and allies for sending a message to the FCC. Net Neutrality is not negotiable and we won’t accept anything less.

Scroll below for a few photos from our action this morning, and check out our Flickr album here.