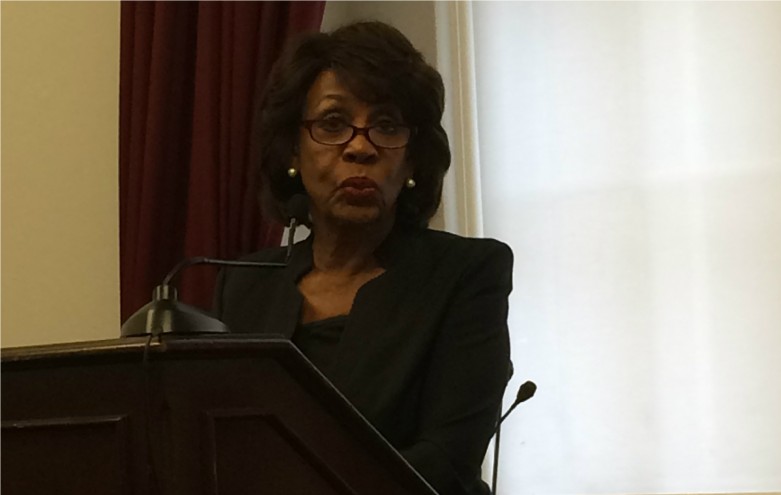 On Monday, a coalition of racial justice leaders and open internet champions held a briefing to celebrate this important milestone — and to gear up for the fights ahead.

As Free Press President and CEO Craig Aaron noted, the story of winning Net Neutrality is the story of millions of people showing up to push policymakers in D.C. to do the right thing. But some elected officials didn’t need pushing.

Rep. Maxine Waters (pictured) understood from the first how important the open internet is for Black and Latinx communities in particular.

“The Internet and social media have empowered individuals and communities all across this country to organize and mobilize in unprecedented numbers,” she told the crowd at Monday’s event. “You have to ask yourself, who would benefit [from] any attempt to roll back internet freedoms?”

FCC Commissioner Mignon Clyburn spoke about her resolve to keep fighting for Net Neutrality. Trump’s new FCC chairman, Ajit Pai, has promised to take a “weed whacker” to the open internet rules and has repeatedly lied about their impact on investment. But Clyburn is ready to defend our digital rights. “This commissioner will not tolerate any action to rescind the promise of Net Neutrality,” she said.

Following the speeches from Waters and Clyburn, Steven Renderos, organizing director at the Center for Media Justice, moderated a panel discussion among activist leaders about how crucial the open internet is to their work. Panelists also discussed the threats the Net Neutrality rules now face from both Congress and the FCC.

“February 26th not only marks the anniversary of the passing of Net Neutrality, but also the five-year anniversary of the murder of Trayvon Martin,” said Dante Barry, the executive director of Million Hoodies Movement for Justice. He argued that the open internet is critical for a new generation of Black and Brown activists trying to share information, build relationships and expose racial injustices that too many traditional media platforms ignore.

According to Color Of Change Campaign Director Brandi Collins, the open internet enabled her organization to grow to the powerhouse it is today. “Net Neutrality is what allowed us to call attention to injustice in Ferguson and lead a national conversation on racism and police accountability. It is what allows us to speak out against Trump’s New Klan and help build an unignorable opposition.”

Even the ISPs say they support Net Neutrality now — in theory. They’ve claimed the current rules are based on a confusing legal framework that creates uncertainty and depresses industry investment, but Free Press Senior External Affairs Director Joseph Torres noted that these arguments don’t hold water. “ISPs want to change how the internet has always worked so they can have more control,” he said. “We cannot allow Trump and his FCC chair Ajit Pai to take away the open internet and silence dissident voices.”

Folks in the room spoke up and shared stories about how Net Neutrality serves disabled communities and local libraries; others commented on the order’s ripple effects, which include the FCC’s adoption of online privacy protections and the agency’s recent expansion of the Lifeline program to subsidize broadband access as well as telephone service.

One thing is clear: Chairman Pai is going to face fierce resistance when he tries to take away Net Neutrality.

If you missed the briefing, not to worry! You can watch the video here: