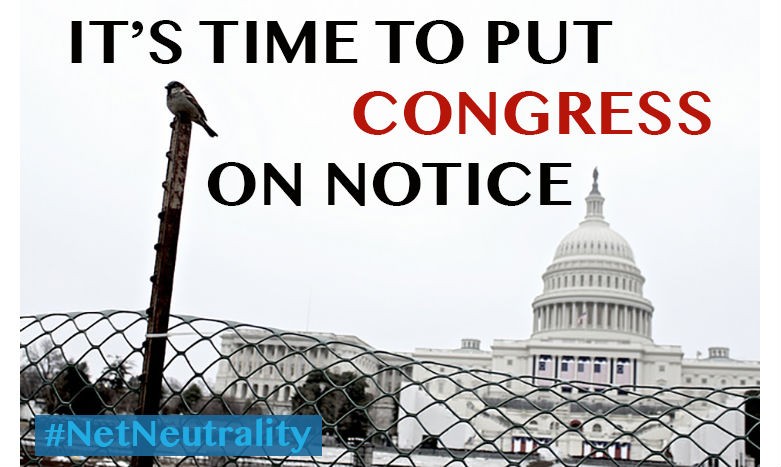 Net Neutrality Is Next

Last week, the Trump administration began its war on the open internet — signaling that the Net Neutrality rules we worked for over a decade to pass are next on the chopping block.

We can’t lose Net Neutrality. It’s time to put Congress on notice and make sure it doesn’t mess with the open internet.

Members of Congress are on recess right now and are hosting in-district meetings and town-hall events — which means you have the opportunity to get face to face with your senators and representative and urge them to leave Net Neutrality alone.

Without Net Neutrality, internet service providers like AT&T, Comcast and Verizon would be able to control what websites or applications you’re able to access, and charge you more to visit specific sites. We must fight to keep the internet open — Net Neutrality is what’s made the internet such a powerful tool for political organizing, education and innovation.

It’s thanks to Net Neutrality that anyone can mobilize their friends and families online. When activists are able to turn out thousands of people in the streets at a moment’s notice, it’s because internet service providers aren’t allowed to block their messages or websites.

Net Neutrality is particularly important for communities of color because it allows us to bypass traditional media gatekeepers that often perpetuate stereotypes — we can challenge harmful narratives about our communities by telling our own stories online.

Speak up for Net Neutrality at a town hall or in-district meeting — it’s the single most effective thing you can do right now to protect the open internet. Sign up and we’ll send you lots of helpful tips on how to make your case.

Your senators and representative need to hear from you. They need to know that we’re still watching.