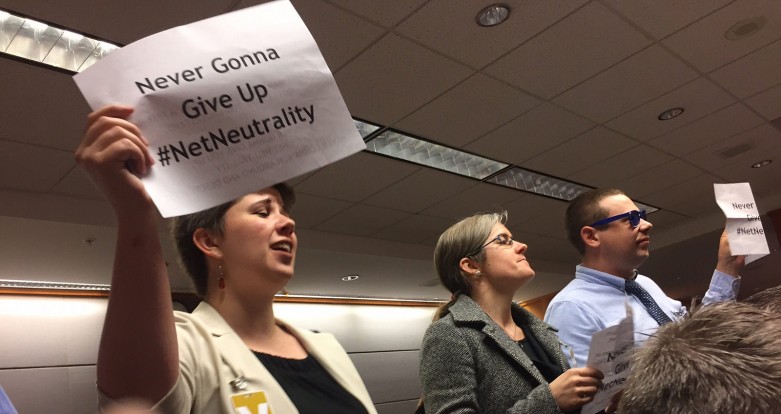 When I think about stories I’ll tell my grandkids about my days at Free Press, this week’s protest will be among them. I and several other activists disrupted a public Federal Communications Commission meeting using a classic internet meme, the “Rickroll,” in a show of support for the open internet.

We interrupted a speech by FCC Chairman Ajit Pai, blasting the 1987 Rick Astley song “Never Gonna Give You Up” over a speaker, while we sang modified lyrics that drew attention to the present threat against Net Neutrality protections.

We sang silly lyrics like “Never gonna give you up, Net Neu-tral-ity, never gonna run around and hurt you,” as Department of Homeland Security officers escorted us from the building.

Five of us were banned from entering FCC headquarters in the future. This was just the latest in a series of unfair measures the FCC has taken against Net Neutrality protesters. During previous agency meetings, FCC security made it difficult for organizers to deliver a pro-Net Neutrality petition and booted silent protesters for the non-confrontational act of wearing “Protect Net Neutrality” T-shirts.

Joining us this Thursday were our friends from Demand Progress, Free Software Foundation and Popular Resistance. Following our song, we regrouped outside with a larger contingent and a banner proclaiming our commitment to never give up on Net Neutrality.

We held this protest because of the quickly worsening landscape around Net Neutrality. Earlier this month, Chairman Pai met with phone- and cable-industry lobbyists to unveil a plan to repeal the FCC’s Open Internet Order and replace it with voluntary agreements by internet service providers to maintain a yet-to-be-determined set of conditions. The action would effectively put control over online choice in the hands of companies like AT&T, Comcast and Verizon, which have a long history of abusing the online rights of internet users. Pai previously worked as a lawyer for telecom giant Verizon.

If the Trump administration thinks we’re going to sit quietly by while it destroys Net Neutrality behind the scenes, we want it to know that it better think twice. We see through the Trump administration’s corporate-driven agenda, and know its attacks on the internet are designed to keep people — especially resisters and communities of color — in the dark.

If you’re interested in saving Net Neutrality from this latest threat, register for our national organizing call — “Net Neutrality or Bust: A Call with Free Press” — taking place on Thurs., April 27. On the call, you’ll hear from us about our experience during the FCC protest and receive a toolkit about hosting protests in your own community.

Check out more photos from the protest here.