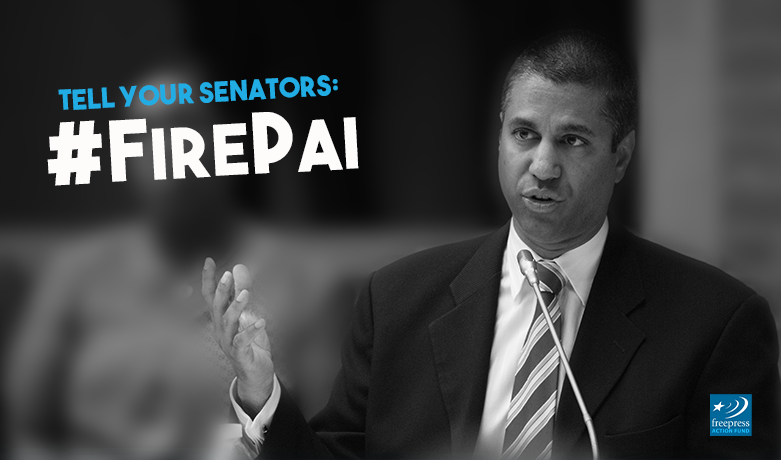 The Senate majority is charging forward with plans to vote to reconfirm Federal Communications Commission Chairman Ajit Pai for another five years. Rehiring Pai to head the agency that oversees U.S. communications policies would be a boon for the phone and cable companies he eagerly serves. But it would hurt everyone else who needs this agency to put our communications rights before the profits of monopoly-minded media giants.

Usually nominations to agencies like the FCC sail through without a dissenting vote. But based on the last five years he spent at the agency (and his past eight months as designated chairman), it’s clear Pai doesn’t deserve another term.

That’s why Free Press Action Fund is urging the Senate to reject Trump’s nominee. And it’s why thousands of people are calling Capitol Hill before the vote — expected as soon as Monday — and asking their senators to fire Pai.

And for good reason.

Pai had barely taken his seat before making a hard turn even further to the far right. While he claims he bases FCC decisions on evidence, Pai ignores any fact that conflicts with his entrenched ideology and prejudices. (And he’s tried to smear critics like Free Press as fringe groups when they dare to point out basic facts he’s deliberately omitting.)

All told, Pai's worked to undo rules that protect internet users, communities of color and poor people but threaten deep-pocketed companies like Verizon, his former employer. Time and again he’s failed to stand up for those he’s sworn to serve. If he succeeds in his plan to obliterate Net Neutrality protections, he’ll go down as the worst chairman ever.

But it’s not too late to stop him. In the coming days, senators have the opportunity to intervene on the public’s behalf and fire Pai. Here are five reasons they should do so:

Despite all evidence to the contrary, Pai continues to insist that Net Neutrality kills investment. The real investment numbers tell a different story.

All available data indicate that the 2015 decision to adopt Net Neutrality rules is working as intended, benefiting internet users, broadband providers and the myriad businesses operating online. Aggregate capital investments at publicly traded ISPs were 5 percent higher during the two-year period following the FCC’s open internet vote than they were in the two years prior to the vote. Cable-industry physical network investments increased 48 percent compared to the amount invested during the two years prior to the ruling.

Pai would literally erase these data points from the historical record if he could get away with it. In May, he began an agency proceeding to destroy the Net Neutrality protections the Obama FCC established in 2015. In the months since, he’s grabbed every any opportunity to paint a completely false picture of decline and dysfunction across the broadband sector, and blame these imaginary failings on the 2015 rules.

“Chairman Pai ignores the vibrant reality of internet investment in his determination to misuse and cherry-pick data suiting his predetermined positions,” said Free Press Action Fund Policy Director Matt Wood. “He just parrots the hysteria and faulty research of phone and cable lobbyists and their paid-for analysts. Unlike Pai, the real numbers don’t lie, and they show a healthy and growing broadband sector since the rules were put in place.”

The success of the Net Neutrality rules is reflected in the overwhelming public support for them. The FCC’s docket on the matter was flooded with more than 22 million comments, and the vast majority of individual comments favor the safeguards.

Public polling shows strong support for Net Neutrality protections, even from Republican voters: A University of Delaware survey found that 85 percent of Republicans opposed allowing ISPs to prioritize some web content over others. A similar poll from the Internet Freedom Business Alliance found a large majority of self-identified Republicans and conservatives support Net Neutrality rules.

But neither market data nor public sentiment has dislodged Pai from his single-minded resolve to provide another massive handout to his friends at the nation’s largest phone and cable companies.

Everything Pai has done since Trump appointed him goes against his day-one pledge “to bring the benefits of the digital age to all Americans.” Instead of focusing on expanding internet access, Pai has undermined the agency’s Lifeline program, created during the Reagan administration to better support low-income families seeking affordable access to communications.

Lifeline is the only federal program poised to increase broadband adoption and affordability, and provide a pathway out of poverty for millions of people. But in February Pai unilaterally revoked the Lifeline Broadband Provider status of nine internet service providers and stalled implementation of the FCC’s 2016 Lifeline modernization, which was designed to streamline the program and make internet access more affordable for people struggling to get by.

This decision was met with an outcry from nearly 40 digital-rights advocacy groups, including the American Library Association, the Center for Media Justice, Free Press, the NAACP, the National Consumer Law Center, the National Hispanic Media Coalition and the United Church of Christ Office of Communication Inc.

Pai’s actions are making life much harder for the many families and students with low incomes who were in line to receive affordable connections from the providers he denied access to the Lifeline program. He’s stood in the way of ongoing efforts to modernize Lifeline by promoting the outdated findings of a GAO report to sow more doubts about the service.

“When talking about Lifeline, we hear a lot about waste, fraud and abuse,“ Free Press Action Fund Deputy Director and Senior Counsel Jessica González testified before the Senate earlier this month. “But this narrative is overblown and frankly offensive. I have long been troubled by the tenor of the Lifeline debate: There’s a tendency to wage war on the poor, to demonize and assume the worst about Lifeline recipients. And I cannot sit here today, especially as White supremacy is on the rise around the country and in the White House, without directly confronting the racist undertones of these assumptions.”

Pai’s foot-dragging on Lifeline is stranding more than 17,000 recipients who had already started receiving broadband service — and denying potential service to countless others.

Pai is trying to ram through the proposed merger of Sinclair Broadcast Group and the Tribune Media Company. If the deal goes through, the racist and Islamophobic Sinclair would gain control of more than 233 local-TV stations reaching 72 percent of the country’s population — far in excess of congressional and FCC limits on national and local media ownership.

Prior to becoming chairman, Pai had private meetings with Sinclair executives. Those executives have since told investors that they’re confident Pai will continue to bend existing ownership rules to clear a path for mass consolidation. In exchange, the Trump administration is gaining an even more powerful megaphone in the media: Sinclair routinely produces pro-Trump TV commentaries that all of its stations are required to air.

“Sinclair has long tried to evade the FCC rules it’s now trying to erase with the help of the Trump administration,” said Free Press President and CEO Craig Aaron. “Sinclair forces its local stations to air pro-Trump propaganda and then seeks favors from the Trump administration worth billions. This should be a national scandal. And if it’s allowed to happen, it will unleash a new and unprecedented wave of consolidation in local TV that may boost short-term stock prices but will spell long-term disaster for local communities.”

In its petition to deny the Sinclair merger, Free Press demonstrates how the broadcaster has failed to show any public-interest benefits from the proposed deal. The merger would only worsen Sinclair’s longstanding pattern of evading public-interest obligations and abusing its market power. If the deal is approved, Sinclair would do even more harm to local communities — especially to low-income families and people of color, who are more likely to rely on broadcast TV for news and information.

One would expect the country’s top communications official to be a dependable defender of the First Amendment and a free press. But when Trump called the news media “the enemy of the American people,” Pai stood silent.

In hearings before Congress and the press gaggles that follow FCC meetings, Pai dodged repeated questions about whether he agreed with the president’s incendiary comments. “Well … I don't want to wade into the larger political debates," he said when pressed by Sens. Maggie Hassan (D–New Hampshire) and Tom Udall (D–New Mexico) in March.

“Ajit Pai's refusal to speak out against attacks on the press is outrageous and dangerous,” said Aaron. “We’re entering uncharted waters when the nation’s top media regulator — head of the allegedly independent agency that guards the public airwaves — won’t stand up for press freedom."

But Pai’s First Amendment indifference didn’t end there. His agency’s security and other FCC staff have silenced dissenting voices, manhandled a reporter and barred members of the public from attending the agency’s monthly open meeting without due process.

During one incident, on March 23, Free Press Action Fund members David Combs and Joe DeGeorge attempted to attend the FCC’s open meeting wearing plain white T-shirts that read “Protect Net Neutrality”. In a clear First Amendment violation, FCC security personnel informed the two that they would not be allowed to enter the public meeting room unless they removed the T-shirts or flipped them inside out to conceal their message.

“It’s beyond ironic that the government agency charged with promoting First Amendment values is intent on violating them in the Trump era,” said Free Press Action Fund’s González. “Many of these attempts to limit public speech and participation have targeted those who question or disagree with Pai and the Trump administration over their plans to limit free speech on the internet by repealing Net Neutrality rules.”

In March, Republicans in Congress passed a resolution of disapproval to overturn the FCC’s landmark broadband-privacy rules and expose internet users to spying by companies like AT&T, Comcast and Verizon.

The measure eliminated a 2016 Obama FCC ruling requiring an ISP to obtain opt-in consent from its customers before selling their private data. In the absence of these protections, ISPs can work with data brokers to skirt laws designed to protect your health and financial data. They can buy and sell information on your online habits — and use this to access everything you do online without your permission.

And this data can be used to circumvent longstanding civil-rights protections in housing, employment and consumer credit.

Chairman Pai led the opposition in Washington to keeping these basic protections — little surprise given his many friends and allies within the phone and cable lobby — and he was the first to applaud members of Congress after they overturned the rules.

The move in Congress was met with widespread bipartisan anger, with critics accusing Pai and his Republican allies with selling out their constituents’ privacy.

There was literally no public support for the anti-privacy resolution. Its only advocates are the nation’s biggest phone, cable and internet companies. There’s no question — if there ever was — about how far this administration and congressional Republicans will go to serve corporations at the expense of everyday people.

The FCC rules these out-of-touch politicians find so objectionable simply give people the right to decide for themselves whether to allow their ISPs to share or sell their personal information, including their web-browsing histories. That should be a basic right, but for Republicans in Congress and at the FCC, making money for the cable companies is a far higher priority than protecting your privacy.

Pai personifies this approach. It’s his deep-seated belief that the nation benefits when enormous media companies take charge of communications. His every action since coming into office supports this view.

That’s why people must pick up their phones before it’s too late and urge their senators to fire Pai.