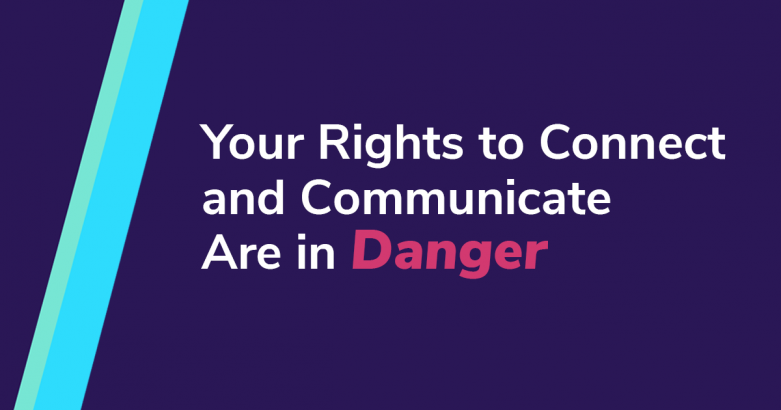 It’s been one year since the election of Donald Trump.

A year ago — while we were all still in shock — we sent you an email that said this:

Donald Trump's victory poses a serious and immediate threat to our friends and families, our loved ones and neighbors ...

We must stand with people who are living in fear and support the social movements leading the struggle for equity and justice.

We started Free Press to fight for your rights to connect and communicate — and that's what we intend to do.

We didn’t know exactly how bad things would get, but we knew we had to do three things: resist, rethink and rebuild.

• Fighting for Net Neutrality: The open-internet rules have been in danger since Trump took office and Ajit Pai took over at the FCC, but we’ve pushed back every step of the way. We’ve taken your comments about why Net Neutrality matters, and our research on the economic and social benefits of the free and open internet, to the FCC. We’ve pushed millions of petitions and calls to Congress to make sure our lawmakers are standing up for Title II Net Neutrality. And we’ve brought unprecedented numbers of new activists and allies into the fight.

• Opposing Pai: In September, we got 41 senators to oppose Chairman Pai’s renomination to the agency — a record for an FCC nominee. We led a coordinated campaign that educated lawmakers and their constituents about how little Pai cares about the public interest. And we’re keeping the pressure on to oppose his attacks on the Lifeline program and media-ownership limits.

• Disrupting Trump: In the first 100 days of the Trump administration, we sent you daily action alerts on how to push back against the attacks on civil rights and civil liberties, communities of color, immigrants, women, queer people and religious minorities.

• Uplifting the truth: Dissenting voices, communities of color and the truth itself are all under attack. Free Press has debunked Pai’s lies about the impact of the Net Neutrality rules, challenged attempts to take broadband away from poor people, and spoken out when free speech and press freedom were under attack.

• Reinventing local news: Through our News Voices project in New Jersey and North Carolina, we’re pioneering solutions to the local-news crisis by connecting local journalists with the communities they serve. In New Jersey, we’re also advocating for the creation of a new fund that would invest public resources in revitalizing local news.

• Empowering Net Neutrality activists: We joined forces with Demand Progress and Fight for the Future to launch Team Internet, which is mobilizing thousands of volunteers across the country through a novel organizing strategy to enlist fellow activists. In just a few months, we’ve had more than 500 local events where people talk about Net Neutrality with their members of Congress.

• Connecting the internet and racial justice: Attacking internet freedom will disproportionately harm communities of color. Through our collaborations with our Voices for Internet Freedom partners, our work at the FCC and on Capitol Hill, and our local organizing, we’ve shown why Net Neutrality is a racial-justice issue.

But our work isn’t done. In the coming weeks the threats will come even faster. Here’s what we’re taking on:

• The Sinclair-Tribune mega-merger: If the FCC approves this deal, Sinclair — which is already the biggest broadcaster in the country — will own local-TV stations reaching more than 70 percent of the U.S. population. Not to mention that Sinclair forces its stations to spread pro-Trump propaganda and run racist and Islamophobic commentaries.

• Out-of-control consolidation: Chairman Pai is fast-tracking the biggest gift to media companies in 20 years. He wants to eviscerate longstanding limits on how much local media one company can own, clearing the way for a new wave of mega-deals that would put the same cookie-cutter content on every channel and leave more journalists standing in the unemployment line.

• Attack on Lifeline: One of the signature wins at the FCC during the Obama years was the expansion of the Lifeline phone-subsidy program to support broadband access for low-income families. So of course Pai wants to take that away too.

• Expiration date for the Net Neutrality rules: The FCC is likely to schedule a vote on its Net Neutrality-killing plan by year’s end. We’re ramping up our campaign to save the rules — and we’ll take the FCC to court if and when it comes to that.

What happens in the next eight weeks won’t be the last word on these issues — far from it. But how we respond in this moment — telling the story of what’s happening, raising the political stakes for policymakers, preparing airtight legal cases for when we sue the hell out of these guys — really does matter.

And we can’t do any of it without your support. We don’t take a cent from business, government or political parties so please chip in whatever you can to keep our work going strong. A generous donor will match every dollar you give by Dec. 31 up to $50,000. Thank you!