Hundreds Rallied for #NetNeutrality Right Before the FCC Destroyed It 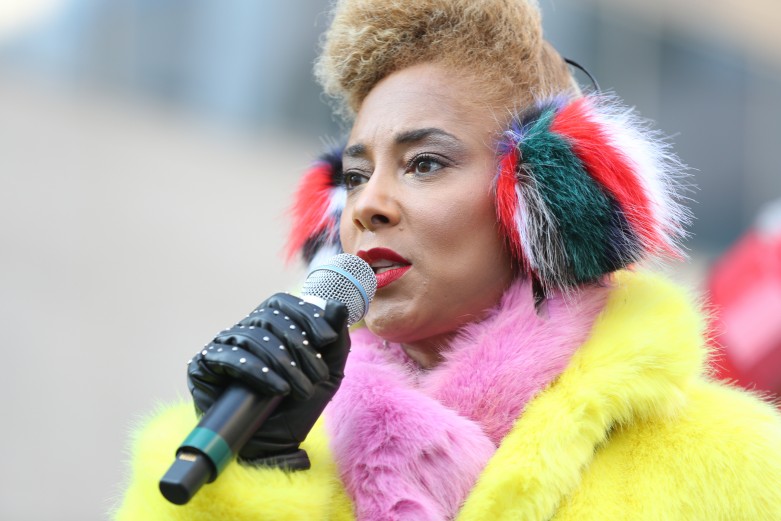 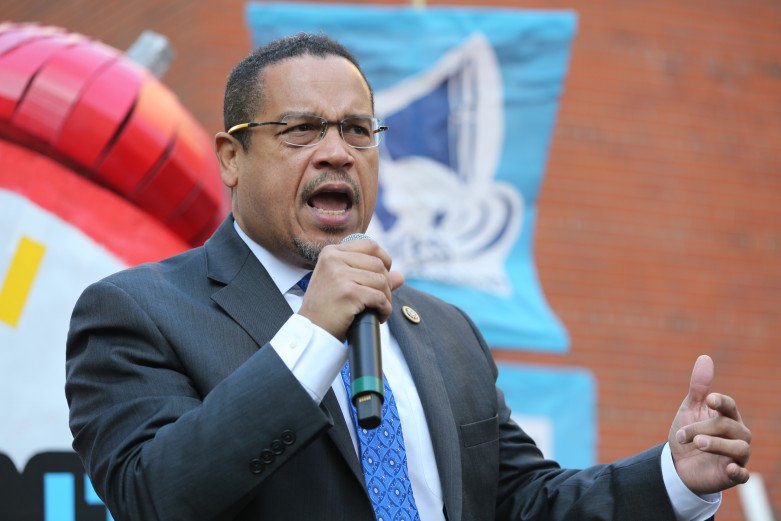 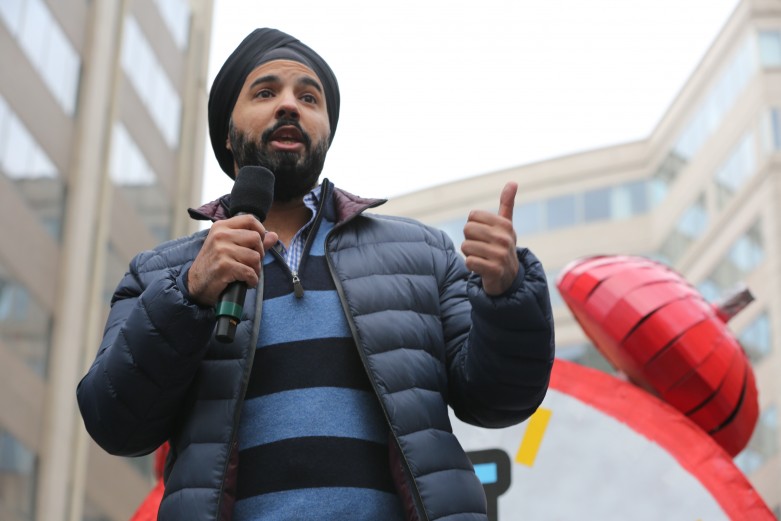 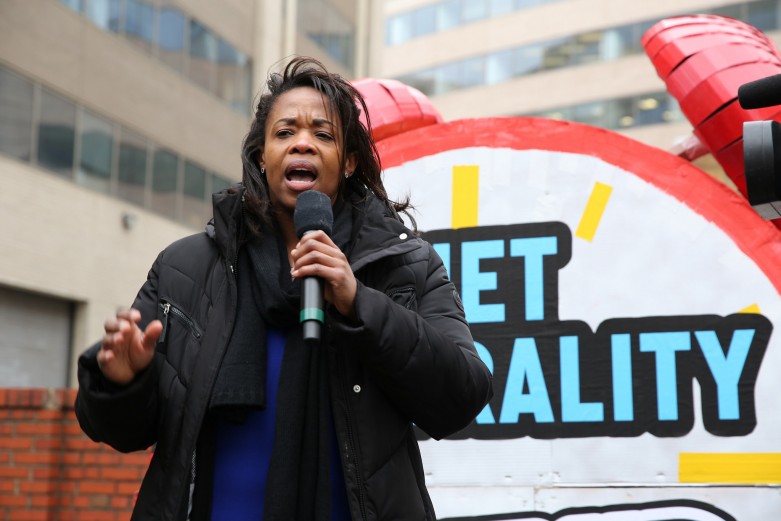 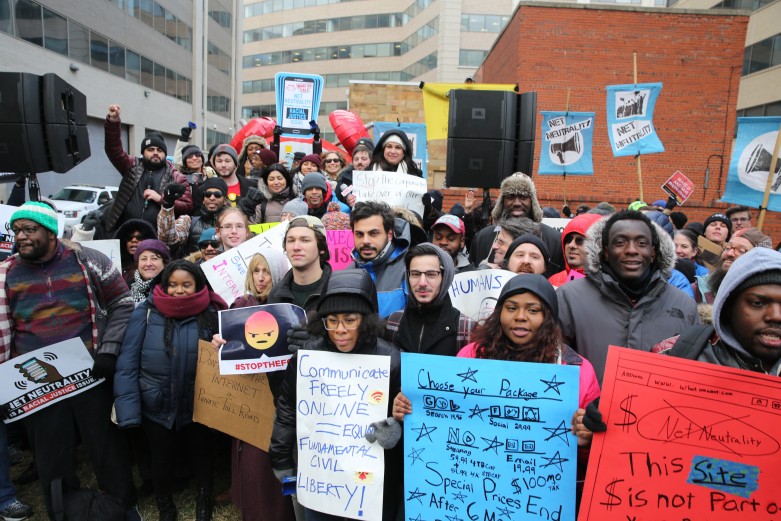 “The open internet helps us find friendship and solidarity in an otherwise isolating world,” said Alex Wiles of the Media Mobilizing Project. “It helps us organize organically in a world plagued by injustice. The internet right now is what phones and paper were for the civil rights movement in the previous century. As a queer black man, I can tell you that losing the open internet will hurt our continued fight for civil liberty.”

Wiles spoke earlier today at the Net Neutrality Wake-Up Call Rally, which was held outside the FCC right before commissioners inside voted along party lines to gut the Title II Net Neutrality rules — a move that will devastate access to online health care, education, employment, expression and more, particularly for communities of color.

While Chairman Ajit Pai was driving yet another shameful handout to his industry friends, hundreds of activists, musicians, lawmakers, FCC commissioners and others gathered to resist.

Voices for Internet Freedom, which fights for the digital rights of communities of color, organized the event to highlight digital civil rights as a vital human need. The Voices coalition includes the Center for Media Justice, Color Of Change, Free Press Action Fund, the National Hispanic Media Coalition and 18 Million Rising.

“In 1970 Gil Scott Heron said the revolution will not be televised,” said Free Press Action Fund Deputy Director and Senior Counsel Jessica J. Gonzalez. “He was right. It wasn’t televised. We waited almost 30 years to have our voices heard in the mainstream, and by the mainstream I mean the internet. Today the revolution is televised. We can connect, tell our stories and fight injustice. This is about speaking out when Black people are killed in the streets, when families are separated by a cruel and heartless immigration system. This is about people.”

Steven Renderos of the Center for Media Justice and Collette Watson of Free Press Action Fund served as emcees, setting the tone for an event that was at turns defiant and inspiring.

Speakers included Democratic FCC Commissioners Mignon Clyburn and Jessica Rosenworcel, who have been powerful dissenting voices at the agency during Pai’s tenure. “You’ve got two people who will sit in those chairs at the FCC today and be your voices for internet equality,” said Clyburn.

“I’m bothered by the incredible contempt this agency has shown the American people who have turned out in droves to make one thing clear: They want Net Neutrality,” said Rosenworcel. “It doesn’t matter if you’re progressive or conservative, a startup or an established business: All of us benefit from internet openness.”

Various Democratic lawmakers also spoke out at the rally, including Reps. Keith Ellison, Anna Eshoo, Pramila Jayapal, Ro Khanna and Jose Serrano and Sens. Ed Markey and Ron Wyden. “They think they’re going to steamroll us today,” said Jayapal. “But we are going to fight and we are going to win.”

“There’s no resistance without a free and open internet,” said Sanders. “A vote against keeping the internet open and free is a vote against poor people in this country, against people of color, against activists, against democracy, and we’re not going to stand for it.”

Speakers channeled lived experience as well as their own activism in underscoring how losing the rules will harm marginalized communities. People of color, the LGBTQ community, indigenous peoples and religious minorities in the United States rely on the open internet to organize, access economic and educational opportunities, and fight systemic discrimination.

“The open internet has given people of color who would not otherwise be heard the opportunity to resist, to agitate, to tell our truth,” said Lemieux.

Without Net Neutrality protections, companies like AT&T, Comcast and Verizon will be free to block or discriminate against any content, apps or websites they choose.

They’ll also be able to block political speech they disagree with. At a time when so many basic rights are under siege, this will have dire consequences.

“The war on the internet is part of the administration’s war on civil rights and communities of color,” said Georgetown Law Professor Arjun Sethi. “They want to prioritize certain views and disfavor or even block certain views. We need to keep using the internet to speak truth to power, to confront the most dangerous forces of our time, to confront racism, homophobia, transphobia, Islamophobia. Chairman Pai is a former Verizon executive. He doesn’t care about the people of this country.”

This fight isn’t over. Free Press is planning to sue the agency, and Free Press Action Fund will call on Congress to use a “resolution of disapproval” to reverse the FCC vote. Already Rep. Mike Doyle and Sen. Markey have said that they will introduce a resolution.

Join our special Facebook Live webinar to find out what’s next in the Net Neutrality fight.

And if you need some inspiration on this dark day in internet history, watch the video of this morning’s rally and check out the complete Flickr album.