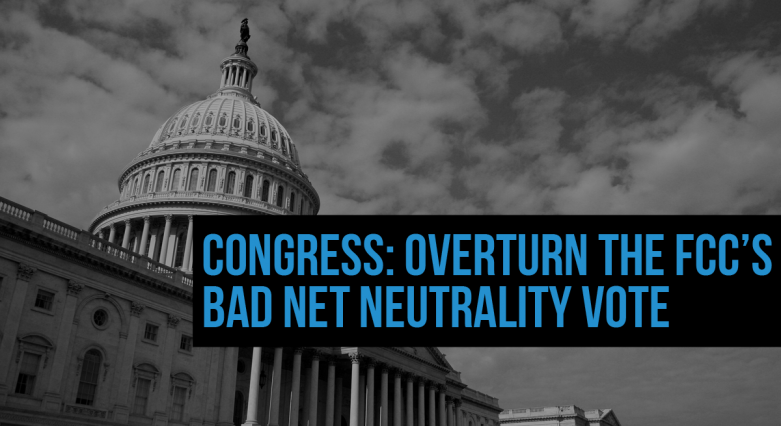 The Internet Isn't Dead (Yet). Here's What Congress Needs to Do.

This Thursday, FCC Chairman Ajit Pai and the other Republican commissioners struck down the Net Neutrality protections and broke the open internet.

We didn't make it easy for them. Millions of us fought back online and off, calling on dozens of lawmakers to stand with us, and doing all we can to defeat Pai’s plan.

First of all, Free Press will take the FCC to court. Suing the FCC poses the best chance for us to win back strong Title II protections.

While our legal team battles in the courts, we need to urge our champions in Congress to pass a “resolution of disapproval” to overturn the FCC’s decision.

That’s right. Congress has the power to restore the Net Neutrality rules we fought so hard for.

Using the Congressional Review Act (CRA), Congress can pass a resolution that would nullify the FCC’s planned repeal of the Net Neutrality rules.

You may remember the CRA from last spring, when privacy opponents used it to roll back the Obama-era FCC’s strong broadband-privacy rules. If we lose Net Neutrality, we need to turn the tables.

The CRA empowers Congress to review new regulations and pass a joint resolution of disapproval to overrule any recent regulations it doesn’t like. Overturning Pai’s misleadingly named “Restoring Internet Freedom Order” would be designed to leave us with the exact same Net Neutrality protections we won in 2015, based on the firm legal grounding of Title II.

Think of it as a double negative: If we repeal Pai’s repeal, we could end up right back where we started — with strong Net Neutrality rules.

Longtime Net Neutrality supporters Sen. Ed Markey and Rep. Mike Doyle have already gotten the ball rolling, promising to introduce a resolution of disapproval as soon as Pai moves forward with his plans to end the open internet.

Passing new Net Neutrality legislation would be like reinventing the wheel: risky, and more effort than it’s worth. Passing a resolution of disapproval should be just like hitting the “undo” button.

As Free Press fights for Net Neutrality in the courts and in the streets, we need our allies in Congress to fight side by side for a clean rollback of Pai’s bogus plan.