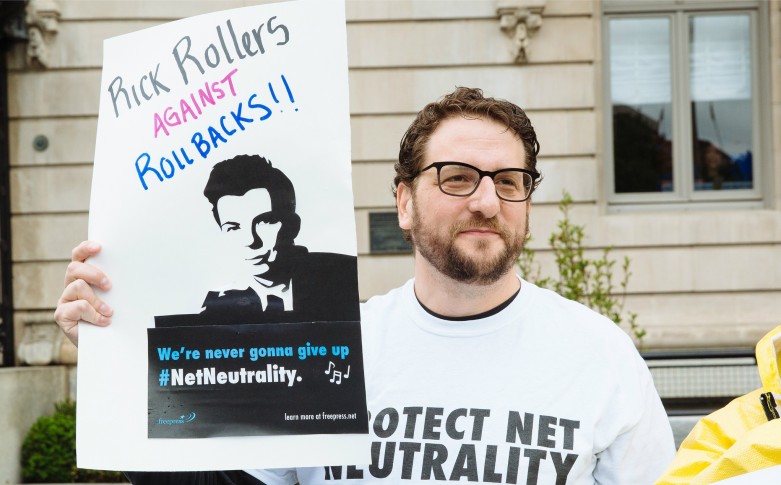 What a year it was. In 2017, our rights to connect and communicate were under attack like never before.

The FCC rolled back the Net Neutrality rules and erased long-standing limits on media ownership. It slashed programs designed to connect low-income families to the internet. Congress trampled privacy protections. And the Trump administration attacked press freedom and vilified journalists trying to hold the president accountable.

As we look toward 2018, we’re angry — but also energized, even optimistic.

Here’s why: This year we’ve seen unprecedented public awareness of Net Neutrality. We witnessed the birth of a new generation of internet- and press-freedom activists, people willing to get out from behind their screens and take to the streets.

At Free Press and Free Press Action Fund, we’re fighting back every way we can.

We’re pressuring Congress to issue a “resolution of disapproval” to overturn the FCC on Net Neutrality, while simultaneously preparing to file lawsuits to challenge the agency's efforts to erase open-internet protections  and media-ownership limits.

With Team Internet — the volunteer-driven organizing project we co-lead with allies at Demand Progress and Fight for the Future — we're building the infrastructure to absorb this energy and put thousands of new activists to work. And with our partners in Voices for Internet Freedom — including the Center for Media Justice, Color Of Change and the National Hispanic Media Coalition — we’re showing why the fight for digital rights is a racial-justice issue.

At the same time, our News Voices project is making remarkable progress in New Jersey, where we just got word our landmark "Civic Info Bill" will be reintroduced in January. Plus our second News Voices project in North Carolina has launched and is holding events across the state.

In the new year, we’ll ramp up every aspect of our work thanks to the people who generously contribute to us. We don’t take a cent from business, government or political parties — our independence is too important.

Just a few days are left this year, and if you haven’t given yet please consider making a donation. You will join with thousands of movement-building donors and sustainers who power our work.

If you’ve already given, thank you for your generosity this year — it makes a world of difference.

On behalf of the whole team at Free Press, I want to express our gratitude for standing with us in these crucial fights. Here's hoping for better days ahead in 2018.