Thanks to your millions of calls, letters, tweets and posts, the Senate is moving closer to a vote to reverse the FCC’s Net Neutrality-killing vote.

On Tuesday at the Capitol, I had the chance to speak about the incredible public outcry on Net Neutrality over the past six weeks alongside eight senators at a press conference organized by Massachusetts Sen. Ed Markey.

I told the audience that while Net Neutrality has long been important, popular and bipartisan, we should thank Donald Trump’s FCC chairman, Ajit Pai, for helping to make Net Neutrality a kitchen-table issue.

“Ajit Pai has awakened the public,” I said. “But they’re not tired — they’re energized.”

The pressure is working: Up on Capitol Hill, office after office is awestruck by the number of calls they’re getting on Net Neutrality and how many young people are speaking out. Senators and representatives are getting asked about Net Neutrality everywhere they go, and more than one member told me their own children demanded they do something to save the internet.

The best thing Congress can do is overturn the internet-destroying rules the FCC approved in December. As of Tuesday, 43 senators had pledged to co-sponsor Markey’s “resolution of disapproval” to do just that — including Senate Democratic Leader Chuck Schumer and Sen. Bill Nelson, the top Democrat on the Senate Commerce Committee.

The first Republican to join the effort, Maine Sen. Susan Collins, also pledged to vote for the bill when it comes to the floor.

That leaves the Senate just seven votes shy of the 51 needed to pass the resolution — which won’t be officially introduced until after the Federal Register publishes the new FCC rules later this year. But that gives all of us more time to keep calling and keep up the pressure.

If you don’t see your senators’ names on the list below, then they need to hear from you now. 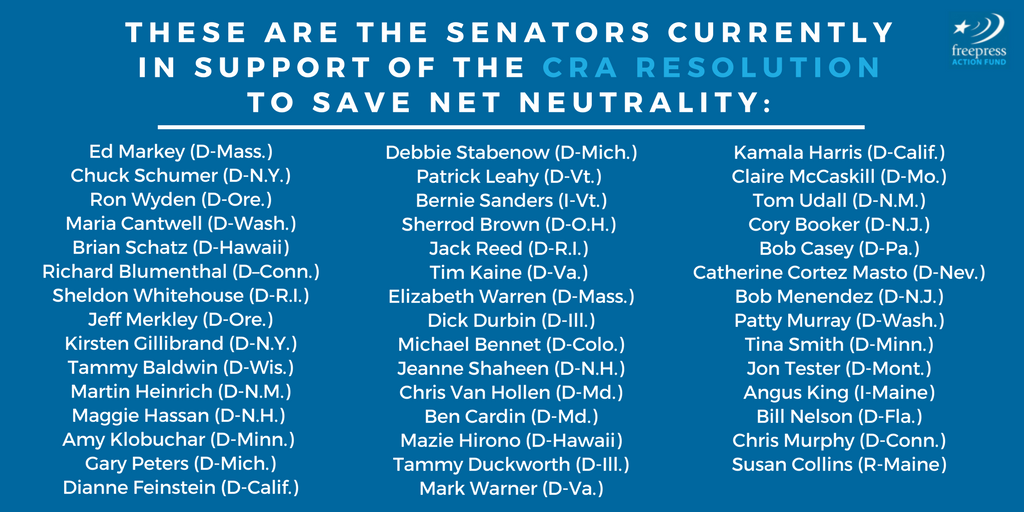 If your senators are already on board, then make sure your representative is signed on to support Rep. Mike Doyle’s House version of the resolution of disapproval. Let your lawmakers know that you’re paying attention. Let them know you won’t be fooled by fake compromises and industry spin.

The only legislative solution worth supporting right now is the total repeal of these dangerous new rules. You can’t claim to support Net Neutrality unless you vote to throw out what the FCC just did.

Let your members of Congress know that you won’t forget who stood with us on this crucial issue at this crucial moment.

And the internet won’t forget either.