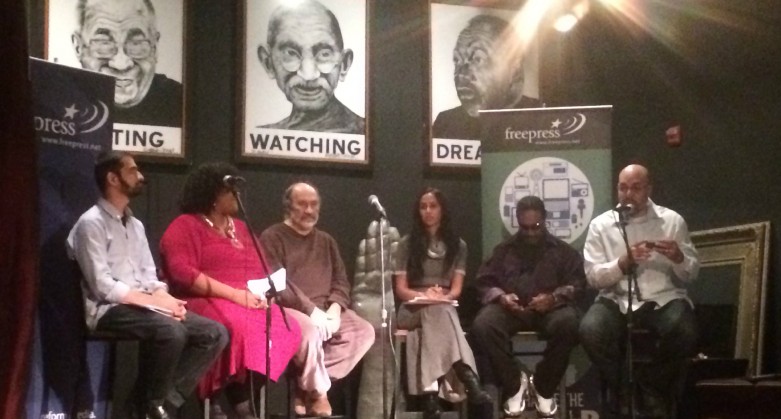 Panelists Say Surveillance Is Nothing New for Communities of Color

The latest revelations about NSA spying did not surprise the activists of color taking part in a recent panel discussion on government surveillance.

The Oct. 24 event in Washington, D.C. — Enemies of the State? Government Surveillance and Communities of Color — was hosted by Free Press, the Center for Media Justice and Voices for Internet Freedom. Morgan State University Professor Jared Ball served as moderator.

Throughout the evening, the panelists discussed how race has been a central factor in the government’s long and shameful history of surveillance.

"Just by the very nature of … being a settler-colonial nation, being a capitalist nation, race and social control are central to the project," said Fahd Ahmed, the legal and policy director of Desis Rising Up and Moving.

“Anytime we see any levels of policing,” he said, “whether it's day-to-day policing in the streets or … Internet surveillance, social control, particularly social control of those that resist the existing system, becomes an inherent part of that system."

Alfredo Lopez, a longtime activist and founder of May First/People Link, said the Snowden revelations revealed the “level of corporate and government relationship and collaboration.”

“That kind of (surveillance) apparatus is being generalized because they cannot allow struggles to be led by people of color in this country,” Lopez said. “Once you do that, you incorporate 85 percent of the population of the world in your struggles and your leadership.”

Adwoa Masozi of the Bill of Rights Defense League said the illegal actions taken in the FBI’s COINTELPRO operations, which sought to discredit and destroy movements led by people of color from the 1950s through the early '70s, have “been made legal” through the passage of federal laws like the Patriot Act.

Former Black Panther Party leader and political prisoner Dhoruba Bin-Wahad said that “the United States has moved into a full garrison state mode ... it is a police state.”

The Snowden revelations really represent a terrifying moment for white people in this country, not just white people, but middle-class people, upper-middle class people, people who essentially on some level — consciously or subconsciously — believed in the document, the Bill of Rights, and the Constitution, and believed that these were realities that were protecting their everyday lives. For people of color, particularly for people coming from communities with a history of discrimination, with a history of being surveilled, with a history of second-class citizenship, with a history of the type of economic oppression that prevents one from realizing any of those rights on a day-to-day basis, I think it was a little annoying and frustrating, like I told you so, I told you they were listening to all of our phone calls.

But all communities should be concerned about surveillance.

And as Ahmed warned, the surveillance programs will expand to target many different communities.

“This surveillance has a purpose, which is to exert the power of the state ... and particularly to control the potential of dissent.”

Click here to watch a video of the panel discussion.

To learn more about the panel and the impact of NSA surveillance on communities of color, read Rania Khalek’s piece in Truthout and Steven Renderos’ blog post.