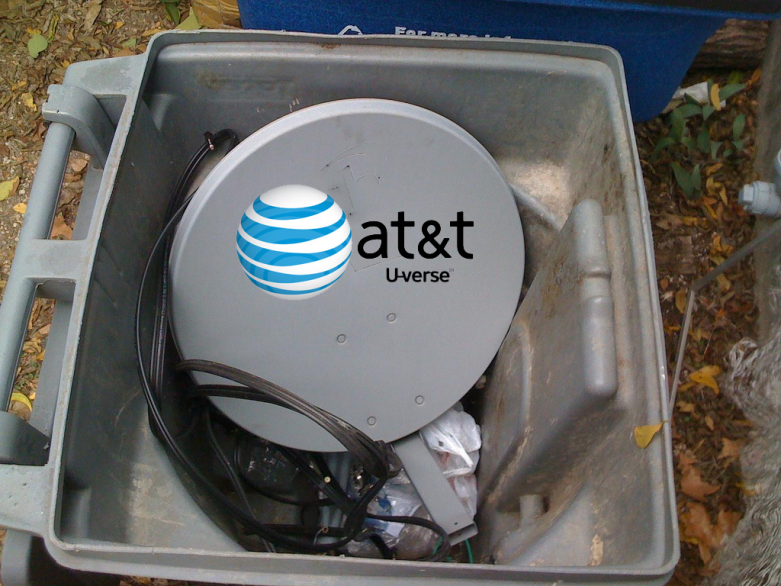 Why the AT&T-DIRECTV Deal Is the Dumbest, Most Wasteful Deal Ever (at Least Since Comcast–Time Warner Cable)

Well, the rumors were true.

On Sunday, AT&T announced that it’s buying DIRECTV, the nation’s top satellite-TV company, for a total transaction value of $67.1 billion (that’s $48.5 billion in cash and equity, plus $18.6 billion in debt).

For this kingly sum AT&T gets a satellite-only company with declining profits and no physical assets located here on planet Earth.

The New York Times’ Jeffrey Goldfarb wrote that the deal “gives off a whiff of desperation.” Motley Fool’s Anders Bylund said “the whole idea seems a bit silly,” but charitably noted that the takeover “wouldn’t be a complete waste of $70 billion or more.”

This is by far the dumbest, most wasteful deal ever. (Well, at least since Comcast announced its plans to buy Time Warner Cable.)

These two takeovers are a perfect illustration of everything that’s wrong with America’s telecommunications market.

Case in point: For the total price of these two mega-deals, AT&T and Comcast could collectively deploy super-fast gigabit-fiber broadband service to every single home in America.

Putting Those Billions in Perspective

In a press release, AT&T CEO Randall Stephenson said that with this purchase the company will “be able to enhance innovation and provide customers new competitive choices for what they want in mobile, video and broadband services.”

Wow. Sounds great! (I’m not sure how removing a pay-TV competitor would provide new competitive choices, but let’s set that aside for now.)

But $67 billion is a lot of dough. It makes you wonder what would happen if AT&T instead invested that money in its core business: broadband.

For the total amount this merger is costing AT&T, it could triple the size of its current fiber broadband footprint and sign up more video subscribers than DIRECTV currently serves.

Crazy, right? But it’s true. According to a variety of sources (including AT&T’s own experience with its U-Verse fiber service, which is available to about 31 million customer locations), the average cost to “pass” a home with gigabit fiber is $700. The subsequent cost to connect a subscriber is about $800, and much less than that if they just sign up for Internet service instead of Internet plus video. (Fiber deployments come in two parts: first passing and then connecting homes. First fiber is strung “past” all the houses in a neighborhood. Then, if a customer subscribes, the company “connects” the customer’s house).

That’s Not So Funny, Money

Now, some who would defend AT&T’s spending might note that the deal’s $67 billion price tag includes $18.5 billion in DIRECTV debt, and that AT&T is using its stock to pay for a good deal of the rest.

Well, the last time I checked, debt is still a real thing. And shares of stock have actual value too. So this isn’t a deal involving amorphous funny money.

And AT&T is shelling out some actual cash here — $14.55 billion to be exact. Network investment would be a much better use of that kind of dough.

But get this: The company’s claiming that this deal would enable that kind of investment.

In fact, the company insists that this merger will allow it “to build and enhance high-speed broadband service to 15 million customer locations.”

That sounds like a lot. But AT&T could pass that same number of homes with gigabit fiber for far less. Indeed, the total cost for Verizon’s FiOS project, which offers fiber broadband to more than 17 million homes, was $15 billion.

And let’s not make too much of AT&T's broadband-deployment promise here.

AT&T is not planning to extend its U-Verse advanced DSL technology to 15 million more homes. No, to reach these 15 million locations AT&T says it will be “utilizing a combination of technologies including fiber to the premises and fixed wireless local loop capabilities.”

Translation: AT&T will be offering the same expensive and heavily capped fixed 4G wireless services that it’s currently offering in areas where it refuses to upgrade its wired networks. This “commitment” doesn’t even come close to offering real broadband to 15 million homes.

Move Along, No Benefits to See Here

There are many other reasons why this deal makes no sense.

DIRECTV is in a bit of a pickle. The traditional pay-TV market is stagnating: Consumers have finally had enough of the annual rate hikes. And many millennials are either too broke or too used to alternative ways of getting video entertainment to sign up for pay-TV.

To grow, DIRECTV needs to make some bold moves to respond to these market realities, like offering lower-priced “over-the-top” pay-TV packages marketed to cord cutters and delivered via the Internet. This is something the company was reportedly considering before AT&T came calling. That’s all changed now.

So, for its $67 billion, AT&T is getting a pay TV-only company, one with declining profits and none of the physical assets AT&T needs to compete in the wired communications market, which is where all the growth potential lies.

But according to AT&T this all makes sense. AT&T claims the deal will deliver $1.6 billion in cost savings thanks to the benefits the increased scale will give it in negotiations with pay-TV channel owners. But AT&T may be overstating this; some analysts estimate these savings at just $400 million a year.

And while this “synergy” may mean better profit margins on video for AT&T, it won’t mean any savings for consumers.

OK, so maybe the deal doesn’t make much sense financially, but this is AT&T we’re talking about. Surely the company’s got some goodies to dangle in front of regulators to push this all through, right?

You bet. As mentioned above, AT&T insists the deal will allow it to bring its fixed wireless 4G broadband services to 15 million additional customer locations. But this rollout would have happened without the merger.

AT&T is also promising to offer stand-alone wireline broadband service for three years if the merger is approved. Wow, thanks AT&T! I thought that in a free market, if consumers demand a product, the market will supply it. Apparently not.

Also, forcing consumers to buy one product (pay-TV) to get another product that’s offered in an uncompetitive market (broadband) sounds pretty close to what’s known as “product tying,” something that’s illegal.

Finally, AT&T says that if regulators bless this mess, it will commit to following the FCC’s now-vacated 2010 Open Internet Order. But this so-called Net Neutrality commitment is a joke. With this major entry into the old pay-TV business, AT&T's incentive to bring an end to Net Neutrality to kill over-the-top video is stronger than ever. A short-term commitment to loophole-ridden rules that Comcast has already figured out how to evade is totally meaningless.

The truth is, AT&T is the only beneficiary of this merger, and those benefits are directly tied to making consumers’ lives worse. For AT&T, this deal is all about revenue growth. But as one analyst firm put it, this approach to growth “isn’t strategy; if simply buying cash flows is sufficient, AT&T could just as easily buy a pharmaceutical firm. Or a dog-racing track.”

AT&T’s executives may not be good at innovating, but they do know how to grow profits by killing competition. Buying DIRECTV will reduce pay-TV choice for about a quarter of the U.S. population. And with that comes higher prices.

Indeed, as Recon Analytics analyst Roger Entner noted, “This deal is about getting more money from the same customers.”

With the amount of profit DIRECTV brings in each year (about $2.9 billion), it will take AT&T more than two decades to pay for this merger.

By contrast, it would take the company at most 8–10 years to pay for a gigabit-fiber deployment that would serve as many or more video customers. If AT&T experienced sign-up rates like Google is seeing for its (fairly priced) fiber services, the investment would pay for itself in far less time.

At its core this deal shows how unimaginative our country’s telecom titans are. Comcast’s takeover of Time Warner Cable comes with a total price tag of nearly $70 billion ($45 billion in equity plus $25 billion debt). For that price, Comcast is getting almost 12 million TV/Internet customers and infrastructure that reaches 30 million homes.

But for $70 billion, Comcast could deploy gigabit fiber past every single non-rural home in the U.S. and sign up far more customers than it would get from Time Warner Cable.

Indeed, the $137 billion price tag of these two deals is enormous when you consider that it would cost about $140 billion to connect every home in the U.S. to gigabit fiber. And that’s the cost starting from scratch. AT&T and Comcast already have fiber-fed services that collectively cover 60 percent of the country.

So why are these companies choosing consolidation over investment?

This trend of buying growth instead of building it is happening because there’s no meaningful competition in our communications markets. If the market’s “invisible hand” were doing its job, we’d see companies investing not in expensive buyouts but in better infrastructure to lure new customers.

This waste is a sign of market failure. It’s the exact kind of market failure that should set off alarm bells in Washington. The purpose of the 1996 Telecom Act was to spur investment in robust, competitive and open networks that enable new industries and boost competition in existing ones. By now, we were supposed to see incumbents deploying outside of their home markets.

But because the FCC and antitrust enforcers abandoned these plans, we’re seeing incumbents refuse to build out to compete against each other and we’ve lost the legal protections that guaranteed these networks would remain open platforms for competition.

If we continue on this path, the U.S. will be a country in permanent decline.

FCC Chairman Tom Wheeler has stated his mantra is “competition, competition, competition.” He and his fellow commissioners have the power to block these wasteful and anti-competitive deals. Doing so would send the right message to the market giants: If you want growth, you should build it, not buy it.