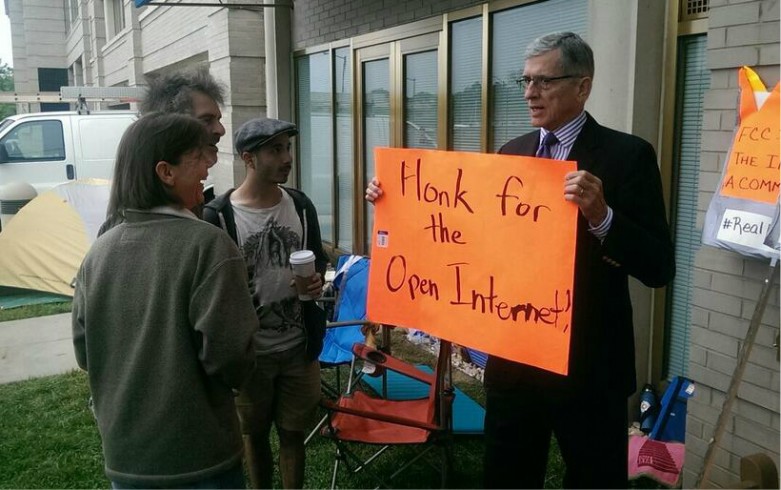 There’s an old phrase that we’ve all heard before: “Don’t believe everything you read in the paper.”

This is good advice for most things. But it turns out that all the media reports about the FCC’s plans that would bring an end to Net Neutrality were 100 percent accurate.

Despite FCC Chairman Tom Wheeler’s protests to the contrary, and his promise that he won’t allow Net Neutrality to slip away, the truth is that his proposal authorizes Internet service providers (ISPs) to discriminate against content and create slow lanes for all those who don’t pay special fees.

The situation is dire. But there’s still reason to hope that we can radically change Chairman Wheeler’s mind — and this terrible proposal — by the time the FCC brings the plan to a vote this fall.

There’s Only One Internet (for now)

At last week’s FCC meeting, Wheeler gave a speech that could have been delivered at the protest outside the building that morning. “This agency supports an open Internet,” Wheeler said. “There is one Internet. Not a fast Internet, not a slow Internet; one Internet.”

Unfortunately, ISPs like AT&T, Comcast and Verizon have other plans. That’s why millions of people are pleading with Wheeler to reclassify these ISPs as common carriers: so the FCC can stop these companies from destroying Net Neutrality.

What is Wheeler actually proposing? What can he do if he refuses to treat broadband providers like the common carriers they are, and sticks with a plan to base Net Neutrality rules on a provision of the law called Section 706? And is the FCC really considering rules that would allow ISPs to discriminate and implement “paid prioritization”?

On this very question, the chairman said, “[T]his proposal does not provide or mandate paid prioritization ... There is nothing in this proposal that authorizes a fast lane. We ask questions but don’t jump to conclusions.”

We tentatively conclude that our proposed no-blocking rule would allow broadband providers sufficient flexibility to negotiate terms of service individually with edge providers, consistent with the court’s view that we must permit providers to ‘adapt … to individualized circumstances without having to hold themselves out to serve all comers indiscriminately on the same or standardized terms.’ [paragraph 97 of the proposal]

Today, we tentatively conclude that the Commission should adopt a revised rule that, consistent with the court’s decision, may permit broadband providers to engage in individualized practices ... [paragraph 111]

.... we tentatively conclude that the Commission should adopt a rule requiring broadband providers to use ‘commercially reasonable’ practices in the provision of broadband Internet access service ... [this rule] could permit broadband providers to serve customers and carry traffic on an individually negotiated basis, ‘without having to hold themselves out to serve all comers indiscriminately on the same or standardized terms ... ’ [paragraph 116]

Ahead of last week’s meeting, Chairman Wheeler attempted to placate those calling on the FCC to use its common-carrier authority to prohibit ISPs from discriminating. The chairman said, “As the Notice makes clear, all options for protecting and promoting an open Internet are on the table.”

At the meeting, Wheeler emphasized this point, stating, “I have also indicated repeatedly that I am open to using Title II,” which is the part of the Communications Act that contains these common-carrier provisions.

But what does his proposal say? Roll the tape again please:

Now the proposal does ask about Title II, common carriage and reclassification — for eight paragraphs in fact, starting all the way down in paragraph 148 of the proposal. But the import of the preceding 147 paragraphs is unavoidable: Chairman Wheeler has concluded that the FCC doesn’t need to restore common carriage to preserve the open Internet. And that’s where he’s setting himself up — by failing to read the court cases the right way.

Can we change Chairman Wheeler’s mind? There’s ample reason to think so.

First off, Wheeler insists that the FCC is trying to get ISPs to act like common carriers. Indeed, the chairman’s comments and his understanding about consumers’ expectations of their broadband service indicate that he thinks it already is a common-carrier service.

“Let’s look at how the Internet works at the retail level,” Wheeler said at last week’s meeting. “The consumer accesses the Internet using connectivity provided by an Internet service provider. That connectivity should be open and inviolate; it is the simple purchase of a pathway. I believe it would be commercially unreasonable — and therefore not permitted — for the ISP not to deliver the contracted-for open pathway.” (emphasis mine)

The “simple purchase of a pathway” is one of the best popular definitions I’ve seen of a common-carrier telecommunications service. The legal definition is a service offered to the public that enables the transmission of information of a user’s choosing, between points specified by the user, without change to the form or content of the information.

Wheeler’s description of “how the Internet works” is thus really important. If his description is correct (it is), there’s no room for debate: Broadband is a Title II common-carrier service, and broadband providers are legally barred from “unjust or unreasonable discrimination” and cannot “give any undue or unreasonable preference or advantage to any particular person or classes of persons .... ”

There’s so much more in the proposal that we’ll cover in the weeks ahead and in our official comments due at the FCC on July 15. There’s plenty in the FCC’s proposal to worry about. For example, if adopted in its present form, at best these rules would create a Kafka-esque maze for all Internet users to navigate through just to ensure they’re not blocked; even after figuring out this maze users could still find themselves shoved into a slow lane.

But the goals of the proposal are basically the right ones. So it’s everyone’s job to tell the FCC and Chairman Wheeler why his proposal doesn’t match his rhetoric. If he really wants to preserve that “open pathway” to the Internet, his only option is to restore common carriage.